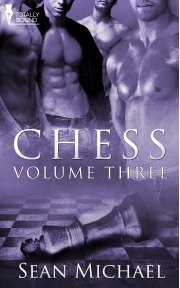 Reader Advisory: This book contains use of urethral sounds and foursomes.

Publisher's Note: This book is best read in sequence as part of a series but can be read as a standalone.

Temple is a cancer survivor, coming up on five years cancer free. He’s travelling across North America on the back of his motorcycle, just going where the wind blows him. Ever since first being diagnosed, he turned into a true believer of living in the moment.

Jason looked into his glass of bubbly, trying to process things. How big was the lake house? Who was going to live there? What did this mean for their family? What was the lake house for? Why hadn’t Knight said anything? Jase knew that Knight was impetuous and a little nuts and Jase knew that the accident had been brutal, the recovery harder, but… Knight had bought a lake house.

This on top of finding out, like ten minutes ago, that he’d been accepted to the physiotherapy program at the university. Knight had bought a lake house and Jason was going to be a student. Neither one seemed quite real, actually. Like someone was playing a big joke on them all, randomly throwing these new things at them to see how they coped. Except, unlike Knight’s accident, these were both good things, right? Well, his getting into the program definitely was. He’d just have to hope the other one was, too.

Rook was babbling away, but it didn’t quite sound natural and Jase wanted to give him a big hug and tell him everything was going to be okay. Luke, the piercer, was going to be ringing on the doorbell any second, too. They were going to give Knight his rings back. That’s what this evening was supposed to be about—a celebration of Knight’s recovery. And then his letter of acceptance had come. And Knight had bought a lake house. Just like that. Jase honestly didn’t quite know what to think.

“Okay, everyone. One glass of champagne and that’s it. Luke won’t do the piercings if he thinks we’re all drunk.” Bishop got them moving into the living room with its low lighting and the big, comfy couch that could—and often had—hold all four of them comfortably.

“Aren’t we just doing Knight?” Jase asked as he followed along, mind whirling about his acceptance letter, school, the lake house. It was like they were on one of those wheels you spun to see where it would stop, only they were just all going around and around and around in his head.

Knight shrugged. “I suppose it’s up to Rook, huh?”

That made Jason blink and focus on the task at hand—if Rook wanted more rings, they could discuss it.

“I don’t know. Tonight’s for Knight, right?” Rook’s hand slipped into his and it might have been Jason’s imagination, but it felt like Rook was holding on just a little bit tighter than usual.

“Right.” He leaned in, speaking just to Rook. “Knight bought a lake house?”

Rook shrugged. “I guess?” Then his lover gave him that smile he loved so much. “And you got into your program.”

“I did. Scary, huh? Me, going back to university. It’s the right decision, though.” He hoped.

“Thank you.” He was a little proud of himself, to be honest.

Rook tugged his head down, giving him a good, hard kiss. The caress was delicious, sweet from the champagne, tickly almost.

The doorbell rang and Bishop chuckled. “I’ll get it.”

“You’re getting my jewelry back, baby.” Bishop could growl when he wanted to.

“Maybe. If I feel like it.” It was clear Knight needed this, was relishing getting his rings back, despite any protests he might make.

“No maybes. No discussions.” Bishop shot the words back over his shoulder as he went to the door. “Luke! It’s so nice to see you.”

“Bish! Man! It’s been forever!” The big voice boomed in.

“Oh man, he makes my nipples tingle.” Rook pressed close to him.

Knowing Rook didn’t mean that Luke himself did it for him, Jase chuckled, pinched one nipple hard, then tugged on the ring there. Gasping, eyes going wide, Rook rubbed against him.

“Is that okay? Too hard?” Jason wasn’t into causing pain, but he knew Rook liked a firm touch sometimes. Okay, a lot of the time.

“No, honey, it was wonderful.” Rook’s grin was contagious. “Surprising but so good.”

“You two are gooey. Awful.” Knight was lounging on the sofa, watching them.

“Are you jealous?” Rook dragged Jason over to where Knight lounged on the couch and they sat on either side of him. “We can be gooey with you too.”

“Ew. No. Shoo.” There wasn’t any heat at all behind Knight’s words.

Rook leaned in and laid a sloppy kiss on Knight’s lips. Knight gagged and struggled, but he was laughing hard. He liked to pretend to be all hard and cold, but they all knew better. Especially when it came to Rook.

Excerpt from The Piercer's Game

Luke finished doing his orders and the taxes, then rolled his head on his shoulders. Tired. He was tired and ready for a beer and a burger. He headed out of the little office he shared with Donny, waving at his best friend and partner as he passed by.

“I’m going to bail. You need anything?”

Donny shook his head. “No, I’ve only got another ten minutes or so left and Armen is picking me up. Turn the sign to closed, though, will you?”

“Yeah. Don’t do anything I wouldn’t do.” Donny winked at him.

The bell over the door jangled as the door was opened, a tall, skinny, bald man in leather walking in.

He and Donny looked at each other, wincing. No one was going to want to start something new this late in the evening.

“I’ll handle it,” Luke offered. It was probably just a question anyway, right?

He headed to the door, offered the dude a grin. “What can I do you for?”

“I’d like a tattoo, I think. Are you the tattoo artist?” The man had a gravelly voice, like he’d swallowed glass or something, and his eyes were so brown. They seemed huge, too, probably because of the bald head.

“No. I’m the piercer. Would you like to make an appointment?”

“I’d like to talk to someone first. Can I talk to you?”

Donny was swamped and about to leave anyway, Bill and KT were both working on big pieces that were going to take them until well past closing, so no one else was currently available. “Absolutely. Talk away.”

Those brown eyes took him in. “Yeah, I think you can help me.”

“Well, I’m the co-owner, so I hope so.” Just look at those pretty eyes. Luke could happily spend some time thus occupied.

One big hand was held out to him. “Temple Garrison.”

“Luke. Pleased.” He shook Temple’s hand, a jolt of electricity passing between them. Wow, he’d never felt anything like that.

“Hi.” They were just standing there, holding hands like that zap had fused their flesh. “Jesus, sorry. Sorry, man.” He let his hand drop, feeling like a bit of an idiot.

“No, no apologies necessary. You felt it too, eh?”

“There somewhere around here we can sit? Have a bite to eat?”

“I…” Okay, that was odd. Intriguing, though. Surprisingly. “Jack’s Diner is two doors down.”

Wait. Had he just agreed to eat with a stranger? At least it would be in public.

Temple smiled, looking pleased as punch. “Okay, let’s do it.”

“Let me grab my phone.” He headed to the office. “Going to Jack’s, having a bite with a customer.”

“What? Why?” Donny demanded.

Donny gave him a glare. “A repeat customer?”

“I’ll have my phone, man.” And Jack’s was practically next door and there was that whole ‘in public’ thing. Still, Don was a good guy. A genuinely good guy.

“I know, right? Weird.” He gave Donny a smile and headed back out, turned the sign around on the door. “You ready, man?”

Temple straightened from where he’d been leaning against the counter. “I am.”

“I’m sure they do.” Even if Luke thought a salad was a weird choice for a tall, bald guy dressed all in leather, he tried not to make judgments like that, but this guy screamed biker and he had yet to meet one who was into salads.

“Cool.” Temple walked along next to him, long legs just eating up the pavement.

The walk didn’t take long enough to even talk, the well-lit diner inviting in the late summer night.

Share what you thought about Chess: Vol 3 PRINT and earn reward points.