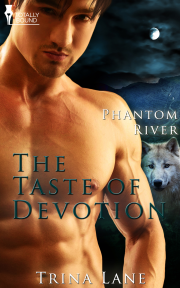 The Taste of Devotion

Book 3 in the Phantom River series

One man searching for a place to call home stumbles into the arms of another wishing for a mate to complete his.

Cooper Tessen, enforcer for the Phantom River Pack and Sheriff of Stonepass, has watched each of his two best friends enjoy their mated bliss. He's thrilled they've found happiness, however, he feels a distance growing between him and his blood brothers because he has no experience of the connection between a shifter and his mate. Cooper fills the hours of his lonely days by spending as much time as possible working at the station to protect his town, and, secretly, off on dangerous missions for the government. Burning the candle at both ends gives him little time to focus on his longing to have a mate of his own.

Darren Caisil is on the run. Accused of a murder he didn't commit, it's either become a lone wolf or be killed by the very pack he'd spent his life trying to serve. He hits rock bottom when he finds himself lost, alone, hungry, and freezing in nowhere Montana during the dead of winter. His last semi—conscious thought as he succumbs to the inevitable is that an angel is lifting him towards heaven. When he wakes up in unfamiliar surroundings, he finds it wasn't an angel after all, but a man. And not any man, but another wolf shifter…one who claims to be Darren's mate.

As they explore their mating bond, Cooper tries to get Darren to open up about his past but the man refuses to share his secrets. Frustrated, Cooper decides to do a little digging on his own. Unfortunately, it seems Cooper's investigation may have stirred up a hornet's nest when it draws the attention of some of Darren's former pack members who are bent on revenge…

Reader Advisory: This book can be read as a stand alone, but may be more enjoyable when read in sequence.

I had a great time reading this. It is a great paranormal M/M romance with an engrossing plot and appealing characters. Ms Lane has created a fascinating modern day earth, advanced in technology and...

The Taste of Devotion was a very enjoyable novel and a great set-up for the next book in the series, The Sound of Salvation, which I found to be the best in the series so far. Recommended.

Share what you thought about The Taste of Devotion and earn reward points.