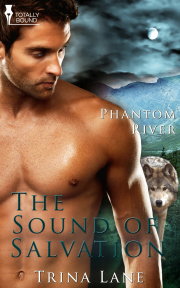 The Sound of Salvation

Book 4 in the Phantom River series

One man is trapped in a continual existence of hellish nightmares-the other strives to finally see the silver eyes of his mate glow with happiness.

Charlie Chaunterel may have been rescued from Adam Broyles ten year ago, however damage from his experience has festered deep in his mind, slowly eating away at Charlie's will to live. He has alienated himself from nearly all his friends and family, except for the big brother who saved him from the demon's clutches.

Bryan Etchason has been in love with Charlie and known he is his mate since they were teenagers. Charlie's kidnapping and torture by Bryan's creator has left the man constantly hovering between the need to hold Charlie in his arms and the acceptance that Charlie must have time to heal if their mating is to have any chance of survival.

As Charlie and Bryan navigate the pathway to his recovery, Charlie finds himself having to make a choice between the man whose touch keeps him warm and stirs a heat inside his body…or the voice that comes to him frequently in the dark of night, calming the tempest of his mind. If only he could have them both…

Reader Advisory: This book can be read as a stand alone but may be best read in sequence as part of a series

It had all the elements I love in a story; the emotions, great characters and of course the happily ever after. However, I am sad to see it end as I would love to see more about this family and their...

Share what you thought about The Sound of Salvation and earn reward points.