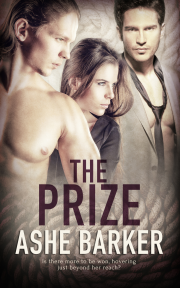 A night to remember…

When she shows up at the prestigious Vivant Club to claim her raffle prize of one month’s free membership, Jessie Barnett doesn’t know what to expect. She’s trembling as she enters, but her inner submissive is dancing for joy, and nothing is going to stop her from claiming what she has won.

Jessie is happy to comply. This is what she came here in search of. But will one evening’s pleasure, however intense, however delightfully tinged with exquisite pain, be enough? Once she has submitted to them totally, will Mark and Greg see their business with her as having been concluded? Or is there more to be won, a greater prize, hovering just beyond her reach?

Publisher's Note: This book has been previously released as part of the His Domain anthology with Totally Bound Publishing.

I swallow hard as I regard the polished oak door before me. The steps leading up to it are a distinguished dark granite, gleaming and austere yet stately, separating the mysteries to be discovered beyond that portal from the understated grandeur of this quiet West London suburb.

I glance from my left to my right, scanning the wide, well-lit, tree-lined avenue on either side, the pleasant-lawned gardens, the gated driveways. There can’t be a property on this street that would sell for less than two million pounds. I wouldn’t mind betting that the well-heeled inhabitants lucky enough to reside here have not the slightest idea of the kinky fun and games to be enjoyed right at the heart of their peaceful little slice of middle England.

Or perhaps they do. Perhaps it’s no accident that this gracious mansion should be located here, catering to the kinkier tastes of the city elite. Certainly the fees charged by the Vivant Club suggest a seriously wealthy clientele. It’s only by pure, dumb luck that such a lowly individual as me should be so much as flirting with the notion of climbing those steps and pressing the doorbell.

I won a competition. Not even a competition, not really. A raffle would better describe it. First prize—one month’s complimentary membership of the prestigious Vivant Club, and an evening’s kinky entertainment courtesy of not one but two of the establishment’s most experienced Doms. So here I stand, my calf-length faux leather trench coat concealing the fetish wear beneath as I consider spinning on one of my five-inch spike heels and making a run for it.

I abandon that notion. Running is simply not an option in these shoes and, in any case, I want to claim my prize. Painfully shy as a rule, quiet, unassuming, every inch the staid legal secretary the world normally sees, it is only when I slip into my latex or leather gear and leave my second-floor apartment to totter down to my car in heels that scream ‘fuck me’ that I can let my usual inhibitions slide from my shoulders.

I love it all—the smell of leather and the heady arousal that aroma always evokes for me, the sound of a decent spanking being administered across a crowded dungeon, the hum of voices, the squeals and moans of submissive joy. Better still, the sting and burn on those occasions when it’s my own bottom bared for the attention of a Dom with a gloriously firm hand. The magical sensation of release as pain builds, grows and blooms to eventually penetrate every nerve ending as I go limp on the bench, a vessel to simply absorb sensation, to receive, to accept, to submit.

Freedom, liberation, a sense of being weightless, untethered, the tight twist of climax then the gentle warmth of the drift back to reality. This is followed by the purity and sense of renewal as my Dom for the evening murmurs words of comfort, encouragement and approval before we go our separate ways.

Tonight will be no different, or so I hope, though the setting is more opulent. And two Doms—now there’s a nice twist. I wonder if they’ll do some sort of ‘good cop, bad cop’ thing. Will they work on me together or take turns? Will I have the choice of who tops me? Will they both expect to fuck me?

One way to find out. I climb the steps and press the brass button marked, helpfully, ‘Bell’.

The door is opened by a butler, of all things. This I didn’t expect. Now a French maid perhaps, or even a waiter wearing a bow tie and nothing else, but this vision of pinstriped elegance who regards me from within the gleaming hallway comes as a surprise.

“Yes? May I help you, madam?” his tone is matter-of-fact, as though it’s an everyday occurrence to answer the door to a lone woman in a long leather coat.

“Are you a member, madam?” he inquires, one imperious eyebrow lifting as he awaits my response.

“No. I mean, yes, I think I am.” Has my prize been activated already? Has my month started?

“You have your card, madam?”

“You are Miss Barnett?”

“Yes. Yes, I am. Jessie Barnett.” I offer my hand and he takes it and shakes briefly. “I won a competition.”

“Indeed, madam. Indeed you did. Please, come inside.” He steps back and opens the door wide in order to gesture me past him into the minimalist tiled hallway. My stilettos clatter on the gleaming floor tiles as I enter and I stop myself from apologizing for making such a din.

For a few moments, I just stand and stare about me at the expanse of luxurious emptiness. The floor is a very pale gray, the walls a brilliant white, and the staircase that arches off to the right sports a dark mahogany handrail and kingfisher-blue deep pile carpeting. There is no furniture, nothing to soften the austere lines or to offer the slightest sense of warmth. This place is cold, almost arctic, designed to intimidate. I stiffen my shoulders and turn to face the doorman.

“No, madam. We know who you are. My name is Pemberton and I shall be on hand all evening if you require my services for any reason.”

“Yes, madam. Refreshments, perhaps, or any desired items of equipment. And, of course, should there be any safe word incident, I will attend to ensure your safety and wellbeing.”

“Ah, you’re the Dungeon Master, then?”

“No, madam. I am Pemberton, as I believe I mentioned. And I am absolute Master here.”

“I…see.” I regard the imposing figure with renewed respect. Is this man to be one of the Doms who will attend to my somewhat singular needs, then?

“Good. If you would accompany me, Miss Barnett, we can get the formalities sorted out and you may proceed with your evening’s entertainment.”

I nod, then follow him in silence as he crosses the hallway and shows me into a small anteroom. There is a table and one chair in the center of the space. A sheet of thick, cream-colored paper lies on the table, and alongside it a pen.

“Please read our terms of business, Miss Barnett, and if you find everything acceptable, perhaps you would be so good as to sign the document where indicated. Once that is completed, you may remove your outer clothing and leave it here along with your handbag, phone and any other personal items. I shall ensure they are kept safely for you and you may retrieve your things from me before you leave. When you are ready, please proceed into the playroom that has been assigned to you and your companions for the evening. You will find it through that door.” He pauses to indicate the door at the opposite end from the one we entered by. “You will receive further instructions at that stage. So, do you have any questions for me now?”

“No, thank you. Sir,” I add the last word, as an afterthought. Pemberton bows his head, then withdraws to leave me alone in the room.

The document is fairly standard consent form stuff, confirming my agreement to be restrained, paddled, spanked and other similar ‘treatments,’ as well as my right to call a halt to any and every activity by using the universally understood traffic lights system of safe words. It requires me to indemnify the establishment against any claim for liability in the event of some mishap befalling me while engaged in said activities, and requires me not to divulge details of the Vivant Club to any individual outside these premises.

I’ve read enough legal documentation to know what to look for, and also to appreciate that this particular piece of paper will never be brandished in a court of law. It has no legal force whatsoever, but rather it serves to express our expectations of each other. I skim it, then sign and leave the pen on top of the sheet.

I stand, remove my trench coat and fold it up before laying it on the seat of the chair. I place my small clutch bag on top of it, my phone inside. I have no qualms at all about leaving my belongings behind. I draw in a breath, set my shoulders, and reach for the door handle to enter the playroom.

The Prize is the first book I’ve read by this author, and I really enjoyed her knowledge of the subject matter.  This is a fast-paced intense story about the first night Jessie claims her prize...

Author Ashe Barker delivers a tantalizing look inside Jessie's visit to the club in THE PRIZE...This is a hot and spicy read that is perfect for a weekend story.

Share what you thought about The Prize and earn reward points.