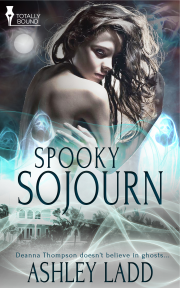 Deanna Thompson doesn’t believe in ghosts. However, everybody thinks her hotel is haunted, in particular the very handsome, sexy and irritating paranormal investigator Harry DeVeaux.

Someone’s trying to kill Deanna, but is it the ghosts she doesn’t believe in, the rich socialite who might be a murderess, or someone else with a beef against The Gilroy Hotel and Resort that Deanna has just been hired to manage? The Gilroy’s owners want the spirits, or whoever is causing the trouble at the hotel, eliminated, and they are pressuring Deanna to do the job as quickly as possible. Paranormal investigator Harry DeVeaux comes highly recommended and, against Deanna’s better judgment, she hires him.

Although Deanna thinks Harry’s crazy for believing in ghosts, and Harry thinks Deanna has a closed mind to the possibilities of the paranormal—not to mention that they highly annoy each other—sparks fly. Deanna can’t help but fantasise about Harry and, inspired by a romance convention visiting her hotel, she writes her fantasies in a private blog that Harry finds, hacks and reads. Ooh la la!

“Ghosts, schmosts. There’s no such thing.” Deanna Thompson, the just hired manager of The Gilroy Resort in Homestead, Florida, squared her shoulders and looked around her new abode as she addressed her assistant supervisor, Chantale Veilleux. Not only would she administer the old, luxurious haunted hotel, but she would also live on the premises. If she was wrong, she might wind up as crazy as the last manager who had run out of the building in his skivvies, screaming about specters and demons and all kinds of weird shit.

Although she’d worked her way up from the concierge desk attendant to assistant manager to general manager of smaller motels and establishments, this was the first time Deanna had supervised a resort-size hotel. It was also the first time she’d supervised a haunted inn—not that she or the owners believed in ghosts. In fact, the owners demanded that she put a high priority on proving that the lodge wasn’t haunted. More and more guests, as well as staff, were reporting spirit sightings and refusing to return until the place had been exorcised.

Chantale, a five foot tall, short-haired, soft-spoken Haitian American with graying hair cropped close to her head squinted her already small eyes. Her lashes glinted with sparkly, silvery mascara that made them look more extraordinary than they might otherwise be. She motioned the sign of the cross over her chest and whispered back as if aghast, “Don’t let them hear you. They won’t be happy.”

“Them? You mean the ghosts? You really believe in them?” Unable to comprehend what she’d just heard, Deanna lowered her voice, hoping she didn’t sound as incredulous as she felt. There was no need to antagonize her new coworker. Still, she shook her head inwardly that her assistant believed the madcap stories.

Chantale nodded, and she bounced her gaze around the room as though she was seeking something that frightened her. “Oui. They are genuine. Everyone on our staff, including me, knows about Mademoiselle Lynette and Monsieur Grant. If you had grown up in Haiti like I did, you’d know ghosts and voodoo are very real. They’re not to be messed with.”

“Then why do you remain here?” Perplexed, Deanna needed to know. She watched her assistant very carefully for nonverbal clues.

“Mademoiselle and Monsieur don’t mean us harm. They want exoneration. They can’t rest until they get it. I want to help them.” Chantale made wide gestures with her hands in the air like she was painting an invisible picture which made her ample chest rise and fall quickly as if she had trouble breathing.

Needing answers she pressed harder. “But so many of our staff have quit. Are those who remain scared of the ghosts? Or do they feel like you do?”

“It’s a mixture. But most are frightened.” Chantale’s right eye began to tic.

Deanna narrowed her eyes at her new acquaintance. Her heart raced. Her toes curled. She didn’t want her staff distracted by such nonsense. In particular, she didn’t want anyone else to quit, particularly not her assistant manager. The owners were already horrified with the attrition rate so she had to fix this mess—whatever it was. “What do they do? I mean, how do the ghosts make their presence known? Has anyone actually seen them?”

Shrugging, Chantale held out her hands, palms up. “No one has seen the ghosts but there are very strange goings-on. They like to bowl. Pins, in particular entire strikes, fall without anything touching them, especially after hours when the lanes are closed. Sometimes pins start flying around in the bowling alley, chasing our attendants. In the kitchen, gourmet dishes are cooked that nobody admits to preparing, often with food we didn’t have on hand. Sometimes butcher knives fly around the kitchen too. It is said that Monsieur was quite the pro bowler and that Mademoiselle was an aspiring chef.”

Really? Flying bowling pins? Butcher knives? Horrible visions of the latter flying around the kitchen filled Deanna’s mind and she shivered. What if it was true? But it couldn’t be true! She had to be the voice of reason around her so she asked, “Has anybody installed video cameras to see what’s really going on? To catch the mystery bowlers and chefs?”

“Deanna,” Chantale said in her soft, French Creole accent. “The video cameras haven’t captured any ghosts. They only show the mysterious events.”

“Do you have time now to show me around the hotel?” Deanna asked her second in command curiously.

An infectious grin spread across Chantale’s attractive face and her cheeks dimpled. “But of course. I would be delighted.”

Deanna learned a lot as Chantale led her throughout the three-building resort consisting of fifteen hundred rooms. Built a few years before the turn of the twentieth century, the resort provided four-star accommodation and a family-friendly atmosphere that lured guests back year after year. There was plenty of history too, including stories of big-time mobsters who had liked to hide out here when things got too hot in Miami back in the thirties and forties, and a modern day Romeo and Juliet who had either committed suicide or had been murdered in the seventies. Stunning, the lobby in the main structure’s concierge area was a palatial mixture of white marble columns and floors with gold filigree ceilings. Potted palm trees and large flower bouquets added spots of vibrant color.

Stained-glass windows and plush white carpets decorated the luxury spa on the second level of the first building. Next door was a highly sought after unisex hair salon. Guests and locals alike kept the spa and salon booked. Nearby, several banquet areas filled the rest of the second story. They examined three additional floors of hotel rooms topping the business-filled second floor.

Neon lights and scads of slot machines lined the casino on the first floor of the second building. Thunderous booms burst out of the bowling alley that housed a big portion of the bottom section beside the casino. A children’s play area sprawled across half the first floor area of the third building, allowing parents a brief respite from their kids.

Awed, Deanna wondered if she was up to managing such a huge hotel, haunted or not.

“Let me show you the grounds. We’ll hitch a ride.” Chantale got out her cell phone and clicked an icon. Rapidly, she spoke in Spanish to the person on the other end of the line.

After Deanna pulled her sunglasses out of her pocket and put them on, they walked to the back grounds. Within moments, a middle-aged Hispanic man drove up with a white golf cart and they climbed into the back seat and took a tour of two large outdoor swimming pools, a golf course, gorgeous gardens and an impressive equestrian center.

I loved this book. Ashley did an awesome job writing this story. It kept me interested the entire time and wanting to come back for more. The characters were great. I also enjoyed how Deanna blogged about...

Ghosts, explosions, murder, and a hotel filled with the most insufferable guest imaginable... Spook Sojourn is a wild ride, throwing every possible curveball Deanna's way while she tries desperately to so...

Share what you thought about Spooky Sojourn and earn reward points.