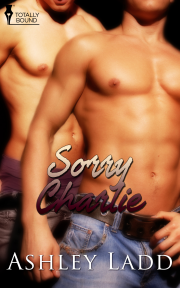 When Charlie's dad wants to make up after a 17-year family feud, his Jonathan is acting funny and he's afraid his partner is being too jealous and clingy.

Charlie's overjoyed, excited, and nervous as hell that his father is finally accepting his sexual orientation and speaking to him after a seventeen-year family feud. He can't understand why his long-term partner Jonathan is acting jealous, clingy when he should be happy for him or at least supportive.

Jon's afraid Charlie's family will hurt him again and he doesn't know if he can mend Charlie's heart if it shatters a second time or stand by and watch while Charlie sets himself up for more heartbreak.

Search your feelings. You know I’m your father. The words rang in Charlie Lang’s head. For the past seventeen years, he’d wished anyone but Asa Charles Lang was his dad, even Darth Vader. His father made Vader look like a pussycat. At least, he’d wanted Luke once he’d found out about him.

Asa had been there at the moment of Charlie’s birth. He’d raised him ‘til he was seven when Charlie’s parents split. That’s when Asa had stolen off in the night to escape his debts, and according to Charlie’s mother, Gail, all his responsibilities to them. He’d found a new wife, made new kids, and only saw Charlie every few years for a measly day or two at a time.

Still, it hadn’t been too bad ‘til Charlie had come out of the closet at age twenty-two and announced he was gay. Then Asa, his stepmom, Sharon, and his half-siblings had disowned him. They’d declared him dead to them.

The thought of running into them on the street had his partner, Jonathan, freaking out.

Now Sharon and a half-brother were dead and buried, and his other sibs had moved away, leaving Asa alone. Now, he was ready to forgive Charlie and rebuild their relationship.

Charlie rubbed the half-day’s growth of beard on his chin and shook his head. This was a good thing. Right?

“I can’t do this with you right now,” he told Jonathan. “I have to meet my dad.” Charlie stood tall and didn’t allow himself to flinch—not outwardly anyway. He also didn’t let Jonathan’s pretty-boy looks or his pout sway him from today’s outing.

Jonathan glared and scrunched his nose. He threw down his towel like a gauntlet, leaving him naked. “When will you have time for me? This man abandoned you for seventeen years, trashed you to everyone you knew and made our lives hell. And now, you run every time he calls. I don’t get it. Explain it to me.”

Charlie turned away from his lover’s tempting body. Even flaccid, Jon’s cock hung long and heavy. What a beaut. He knew it would only take a smile and a little kiss to get it hard and willing. But his dad was waiting—and Charlie was pissed. “This man is my father. You do stuff with your old man.”

“’My old man didn’t turn his back on me. He’s always been there for me and for you. He’s been in my life for all my life.”

Charlie bristled, not knowing if he was more mad or jealous. His lips trembled, and he wanted to hit something. “I’m trying to repair the damage. Of course, it takes more work and time. It’d help if you were supportive.” Even a little.

Jonathan’s eyes glittered like diamonds, hard as ice. He balled his hands on his hips. “Hell! You haven’t listened to a word I’ve said. I didn’t say you shouldn’t forgive and forget, but don’t you think you should be careful? Do you have to neglect me?”

The neediness grated the wrong way on him. Maybe he should rethink this relationship. Hell! Maybe he should move to the Canadian outback and live out his life alone. Obviously, he sucked at relationships. “It’s not easy getting back together. It’s going to take more time right now.”

“Every waking moment? You can’t make up for seventeen years in a week. Be careful. Soon as one of his other children comes back into the picture, he’ll ditch you.”

Charlie froze. He couldn’t breathe. An avalanche of hurt crushed him. Jonathan had just spoken his unexpressed thoughts. “I can’t believe you said that.”

Roiling mad, hurt as hell, Charlie stomped out of the room. He couldn‘t stand to look at Jonathan’s accusing face for one more second.

Share what you thought about Sorry Charlie and earn reward points.