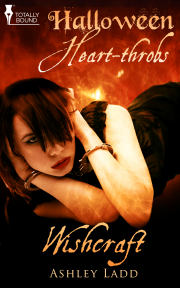 Felicia likes to dabble in love potions, but when she brews one for her old enemy Acacia, it goes awry when Acacia's intended, Jeremy Knowles, falls for Felicia.

Jeremy pursues Felicia and although she fears it's only spell-induced, Felicia can't resist his charms. She only hopes that she won't be forced to turn Acacia into a toad to keep the secret so that Jeremy won't find out, before she can confess her sins.

Drawing together her brows, Felicia checked her mental agenda as she gave her potion one last stir, and then went to see who was brave enough to venture here without an invitation. No one was scheduled, and her clients were well schooled to ring before venturing here. No one visited the Heks’ house unless they were an out-of-town salesman or a lost traveller who hadn’t been spoon fed the gruesome, if made up, stories about human sacrifices and demonic rituals.

“Felicia, open up! I hear you scuttling around in there,” Acacia Pangbourn’s voice shrilled through the house just before the floorboards creaked suspiciously.

Blimey! Acacia was one of Felicia’s ex-classmates, a ghastly creature who’d made her secondary school years a constant misery. Not only had she made goo goo eyes at every man in whom Felicia had shown an interest, she’d committed the unforgivable crime of trying to steal Jeremy. The other woman had never known how close she had come to being turned into a chalkboard eraser.

To her dismay, Felicia discovered the woman was already through the front door and well into the house before she could catch her. Swearing under her breath, she followed the whispery sound of her nemesis’ footsteps on the throw rugs.

After her father had expunged Jeremy’s memories of their beautiful night together and had made Felicia swear never to date another Naggie, not even to talk to another one, the embers of the dead flame had blazed to life. Of course, she had done a little fanning. Okay, more than a little.

No matter what her father had decreed, no matter how much she respected her pop, she couldn’t live her life without Jeremy. She’d had to face the facts—she was a Jeremy addict. He had been as heroin in her blood. His presence intoxicated her and she savoured every memory of their cherished night.

And so, unable to live without him, she’d won back his love.

One summery night after they had graduated, they slow danced under the moonlight, wrapped in each other’s arms. Lost in love, teetering on the precipice of ecstasy just holding one another, they’d gazed into each other’s eyes.

“You’re a vision,” he’d murmured against her lips, his breath minty and highly stimulating.

With a halo of moonlight making his dark hair gleam, he was the vision. As if struck by lightning, she’d sucked in a ragged breath and huskily murmured, “So are you.” Then, with her heart hammering with such force she feared it would spill from her chest, she’d stood on tiptoe and pressed her mouth to his.

Without hesitation, he’d accepted her gift, drawing her up to him. Plundering each other’s lips, they’d let their tongues finish the tango. Fevered, she’d moulded herself against him, noting how perfectly they fit. Only a brief twinge of guilt had crept in to dim her bliss. How could a magical person, or “Maggie,” as they called themselves, fit so well with a Naggie? According to her father, this was impossible—and more than distasteful.

She’d found it anything but distasteful. Jeremy was the most luscious man she’d ever met, his touch the only one that had ever made her senses whirl.

“I only feel alive when I’m with you. All I ever want to be is with you.” It had taken a lot of courage for her to admit this to herself, much less to him. Her father would have disowned her. Her family would have mourned the unholy association. They’d sooner have seen her copulate with a demon.

“I can’t believe what a lucky bloke I am, to have such a beautiful woman in love with me.” He’d stroked her hair away from her flushed cheeks and then nibbled on her ear. His hands had roamed her back and settled on her bottom before he pulled her hips tight against his.

Only later in retrospect had she noted that he hadn’t declared undying love for her. Wryly, her lips twisted. Had it all been one-sided? Oh, sure, he’d been consumed with lust. But love? If it had been love, would any spell have vanquished it?

She didn’t know, but she shook her head.

Now, as then, Jeremy wouldn’t go away. Rather, the memory of him refused to leave her in peace.

Share what you thought about Wishcraft and earn reward points.