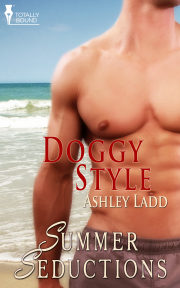 Book 3 in the Bats and Balls series

Devon Barrett hates his baseball team's new name, but the sponsor is the yummiest man he's ever met.

Devon can't stand the baseball team's new name but he falls for Sandy, the yummy new sponsor anyway. But his career as a nurse is on trial, everything's upside down, and it's not a good time to bring someone new into his life.

Against his better judgment he lets Sandy in just to find out he's the last person who is able to support him in his time of desperate need.

Devon Barrett stared at the new team uniforms in disbelief and was loathe to wear them. He barred his teeth and growled back at the logo—a mean bulldog wearing a biker’s leather jacket and cap. Worse, he cringed at the name beneath the photo. Only when he squinted could he read the fine print, High fashion for your pooch.

He balled the kelly-green jersey in his hands and marched up to Clay, the team manager. He shook the shirt like a rag in the man’s face. “What the meaning of this? I’ll be damned if I wear this one.”

Clay stroked his handlebar moustache and took the shirt. He held it out and shrugged. “It was either this or a picture of a poodle wearing a tutu. I figured you guys would prefer this one. But then again, the way some of you bozos flit around the field…” Pirouetting, he did an imitation of a ballerina.

Devon closed his eyes and tried to wipe out the terrible image he was afraid would haunt him the rest of his baseball career. “Why do we have to have either? Why not something more dignified?”

Clay screwed up his face and squinted at the Florida sun, still a scorcher in the early summer evening. “That’s what the new sponsor wanted. It was this or no sponsor. No sponsor and we gotta come up with more moola out of our own pockets. I figured you guys would want to squeeze a buck during these tough times. Live with it.”

Being on administrative leave while the hospital review board decided whether or not he’d be reinstated to his job as a nurse, Devon couldn’t afford to waste a penny. He’d been wrongfully accused of being negligent and letting a little boy die. His savings wouldn’t last long with groceries skyrocketing. Still, he shook his head in disbelief that a better sponsor couldn’t be found. “They must really be scraping the bottom of the barrel for sponsors.”

A stranger butted in and stuck out his hand to Devon. “Hi. I’m the bottom of the barrel, your new sponsor…and team mate, Sandy Falco.”

When the new sponsor closed his fingers around Devon’s, lightning struck and an electric shock coursed through him. He did a double-take at the best-looking man he’d seen in years, a cross between Rob Lowe and Robert Downey, Jr. only better. Woof!

Hoping the cutie couldn’t hear his heart pounding like a bongo drum, hoping he hadn’t made an utter fool of himself, Devon shook the new guy’s hand. “Sorry about that. The new team name threw me for a loop. I’m Devon Barrett, aka the third baseman.”

The dreamboat let his hand linger longer than necessary and let his long, sooty lashes sweep up to reveal beautiful, sensual, ocean-blue eyes that set off his blue-black hair to perfection.

Mr Gorgeous, aka the new sponsor, cracked a to-die-for smile showing off a dazzling smile. “No harm, no foul. I find the name gets people laughing and asking questions. It’s good for business.”

Clay threw Devon’s jersey in his face and snorted. “My business should be so good. He’s buying matching cleats and ball bags for the team, too.”

The shirt smacked Devon in the face before he caught it. Screwing up his face, he muttered, “Thanks.”

Sandy turned a comely pink and shrugged. His movements made the bulldog on his chest snarl with his big ugly teeth. “Advertising and goodwill are the way to go. Good for business, you know.”

Devon nodded but wondered how a business that sold dog costumes and provided doggy services could be so good. It was a lot cheaper to bathe his dogs, and no way would he torture Lucy and Ethel by tying ribbons around their ears much less doll them up in weird outfits—not even for Halloween. He suspected his babies profusely thanked him for that. Still, he wouldn’t turn down new equipment if the guy insisted on splurging. His old cleats were falling apart so badly they hurt his feet. “Well, thanks.”

an emotionally driven story...nicely balanced with plenty of warmth and humour...

Share what you thought about Doggy Style and earn reward points.