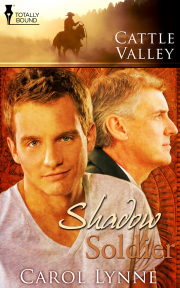 Book 26 in the Cattle Valley series

Deacon McConnell spends his days as a woodcarver and his nights as head of one of the most secretive government agencies in the United States. When he meets a man troubled by his time spent in the Middle East, Deacon feels drawn to the pain in the handsome man's eyes. He makes the decision to help Aaron Ellis any way he can.

Dishonourably discharged from the Army, it takes everything Aaron has to get out of bed each morning. He's become used to faking his way through life, putting on a happy face when the situation calls for it is a lot easier than dealing with his buried memories.

The day Aaron wanders into Deacon's store for the first time, the last thing he expects is an immediate connection with the shop owner. For the first time since leaving the service, Aaron begins to believe there may be light at the end of the dark tunnel. The nights he spends in Deacon's arms slowly begin to drive the shadows from his heart.

After years spent serving his country, Deacon yearns for a normal life. The move to Cattle Valley is the first step, opening up to Aaron the second. When duty calls Deacon out of town, he begins to wonder how much more he'll be forced to give up for his country.

He glanced around the minimally furnished, one-bedroom apartment. It had taken a leap of faith to move out of the garage apartment loaned to him by Matt Jeffries and into the newly constructed apartment building at the edge of town. When he’d first moved to Cattle Valley he wasn’t expecting to stay long, but over time he’d started to build relationships with the men at the fire station and his therapist, Dr Pritchard.

The account balance in front of him would barely cover the cost of the purchase he had in mind. To make it worse, it was an unnecessary extravagance.

The intricately carved headboard he’d spied through the window of Falling Limb Creations would eat away the rest of his meagre savings, but he hadn’t been able to think of anything else for three weeks. Since the moment he’d first spotted the handmade headboard, he’d made it a point to go by the store every chance he got to make sure no one else had bought it. He hadn’t allowed himself the luxury of going inside the shop. The thought of touching the soft-looking wood and not being able to own it was too much.

The responsible thing would be to wait until he saved enough to leave the cushion in his account that his grandmother had always insisted on. Aaron groaned as he ran his fingers through his short blond hair. Responsible was a label he’d been stuck with since the death of his parents when he was sixteen. Under the supervision of child services, Aaron had not only made funeral arrangements, but he’d been the one to pack up his family’s belongings and arrange for the sale of the house his mother and father had purchased only ten years earlier.

With enough money to help with bills and college, Aaron had left Virginia to live with his only living relative, his grandma Alice, in Urbana, Ohio. Life had been bearable for the first year, but one catastrophe after another had quickly eaten away Aaron’s savings. It wasn’t his grandma’s fault. At seventy-eight, Alice hadn’t been in good health when she’d been left with the task of raising Aaron. A series of strokes had left his grandma bed-ridden and in need of medical attention that her social security didn’t quite cover. Add in constant maintenance of her two-hundred-year old farmhouse and it didn’t take long to deplete Aaron’s college money.

I’m gonna do it, he thought and powered down his computer. For seven years, he’d done what he’d had to do. It was time he did what he wanted to do. Aaron grabbed his coat from off the back of the kitchen chair and left the apartment before he could talk himself out of it.

It was a quick five-minute drive to downtown Cattle Valley. Soon, he was parked in front of Falling Limb Creations. His heart sank as he stepped up to the front display window only to find out the headboard was gone. Aaron’s chest tightened as he realised he’d waited too long. It was just a piece of furniture, he tried to tell himself. So why did it feel like so much more?

A knock on the glass startled him, causing Aaron to drop his keys on the sidewalk. He bent and picked them up before coming face to face with the handsome man he’d seen through the window several times. Although he’d never officially met Deacon McConnell, his co-worker, Luke, often talked of his new friend. Deacon motioned Aaron inside.

Aaron shoved his keys into his pocket and opened the shop door. A small set of brass bells strung over the entrance welcomed Aaron into the amazing store.

“It’s not there,” Deacon said, leaning heavily on his cane.

“I see that,” Aaron acknowledged.

Deacon stared at Aaron for several moments. “Come with me.”

Aaron hesitated, but eventually followed Deacon to the back of the store into what appeared to be the workroom. The smell of wood wrapped around Aaron like a warm blanket, reminding him of the years spent chopping wood with his dad in Virginia.

“I’ve seen you admiring this, so I thought I’d put it back for you,” Deacon said, lifting a drop cloth off the coveted headboard.

Aaron reached out and touched the bluebells and violas carved into the woodland scene. “I can’t believe you did this for me,” he replied, without taking his eyes off the headboard. “How’d you know I’d decide to buy it?”

Deacon stepped up beside Aaron. “I saw it in your face the first time I noticed you admiring it. When you returned almost every other day, I figured you’d eventually be in. Turns out I was right.”

Finally! We get Duncan McConnell's story. I have been waiting for his story since he was introduced three books ago. This story was another wonderfully woven tale by Ms. Lynne. Two men with...

The love between Deacon and Aaron was lovely to experience as it unfolded. I loved how the lives of characters from earlier books continue as the series expands.

Share what you thought about Shadow Soldier and earn reward points.