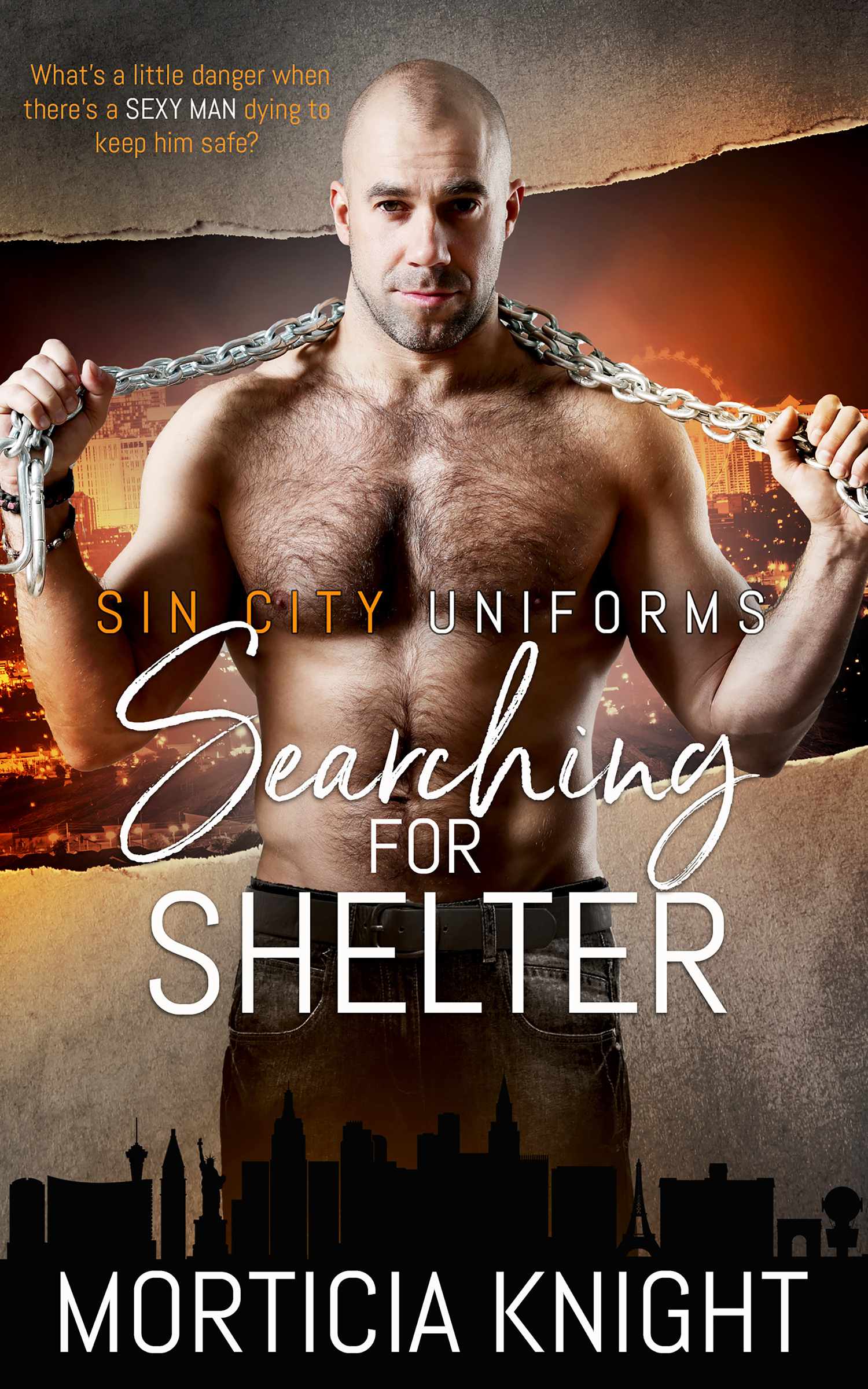 What’s a little danger when there’s a sexy man dying to keep him safe?

After deciding his love life is worse than a disaster film, Rich wonders if maybe he should stick to his book boyfriends instead. It’s not as if he has much free time to date anyway. Between working long hours at the coffee shop, guarding his sodas from his hygienically challenged roommates, and running the programming at the Vegas LGBTQ teen shelter—how could there ever be space for romance?

Diego enjoys taking his downtime from working Search and Rescue by hanging out at the Lucky Cup coffee shop. Nothing relaxes him more than perusing the Internet while pretending he’s not watching the blond barista he’s been pining over for months. He imagines that the pretty boy has more offers than he knows what to do with, so it takes Diego time to work up the nerve to approach him.

Rich isn’t so sure about the rugged, older Diego—even if he’s always thought the guy was hot. But there’s an immediate heat and connection between them that takes him by surprise. Unfortunately, now that Rich believes he might finally get a chance at an ever after, danger seems to stalk him wherever he turns.

Someone in Sin City not only doesn’t want Rich to find love—they want him dead.

“Uh, thanks anyway. But I’m just going to go inside now.”

The air whooshed out of Rich as Jay slammed him against the door of the small house that Rich rented with two other guys.

Where’s Frank when I need him?

One glimpse of the big bruiser’s ponderous bulk typically had most men deciding that Rich wasn’t that cute. Not that Rich was a total wimp, but, despite being tall, he was lean. He’d also been attracting an unusual amount of desperate, grabby men with horndog testosterone strength lately.

Rich continued struggling to keep Jay’s fingers from traveling any farther than a couple of inches past his belt and into the danger zone. The guy was determined. Rich’s pants were tight as fuck. Jay had been placing wet, sloppy kisses—that Rich figured were supposed to turn him on—up and down his neck while he persistently searched for gold.

Is that the bleu cheese from the burger he ate that’s on his breath?

“Seriously. Get offa me!”

Furious and more than over it, Rich shoved Jay back as hard as he could. Something seemed to have permeated Jay’s lizard brain, because he stepped off.

“My…?” Rich huffed and crossed his arms angrily. “Oh my God. Just go.”

Jay stared at him as if Rich were insane. Rich gave him the ‘are you even listening to me, you idiot?’ expression with arched eyebrows and a toss of his upturned hands.

Jay let out a derisive snort. “Fine. But you’ll be missing out on this.” He grabbed his crotch, jiggling his hand in emphasis.

And your breath that reeks of moldy dairy products.

Rich sniffed. “Not if you were the last cock on earth.”

He turned on his heel, thrust his key into the lock, then rammed the door with his full weight to bust it open. A loud smacking sound filled the air, as if the largest piece of Velcro ever made had ripped open as the door hurled inward and banged against the wall. It had a tendency to stick at certain times of the year. Rich slammed it shut, locking himself safely inside. More weird smells accosted his nostrils. He was pretty sure it was a combination of Frank’s socks and Chan’s rather impressive collection of old fast-food bags with the contents within mostly consumed. Mostly.

God, I keep telling them if they’re going to be gross to at least keep the doors to their rooms shut.

As the resident homo, he was constantly told it was his sexual orientation that dictated his need for cleanliness. He reminded them that he wasn’t a stereotype, just a man who didn’t appreciate having the urge to vomit every time he entered his own home.

Rich tossed his light cardigan on one of the rickety dining table chairs. He couldn’t complain about the tacky garage sale furniture, since it’d already been there when he’d answered their ad for a roommate two years before. He meandered into the kitchen then checked the fridge to see if any of his Pepsis had survived being unguarded for the three hours of his life he’d wasted on his so-called date.

Letting out a defeated sigh, he considered being vindictive and taking one of their Red Bulls or Snapples.

He couldn’t do it. It was beyond him why he couldn’t convince his inner good boy to let him have one lousy cold drink. He straightened, letting the refrigerator drift closed on its own. Rich took two steps toward the cupboard that held the plates and glasses then reached up to retrieve his favorite Star Wars cup. He held it under the tap, turning the spigot. He didn’t bother checking to see if there was ice. No Pepsi equaled no ice. He knew the drill.

After grabbing his sweater, he took that, along with his tepid glass of water, to his room. It was the first one at the beginning of the hallway, across from the bathroom he shared with Chan. Frank was the original renter, he and Chan were merely the rentees. Frank occupied the room with the master bath.

Once he’d entered, he shut himself in then lit one of the Glade air freshening candles. The stink of the house always seeped under his door, and he refused to begin stuffing towels in the jamb. He tried to make his personal space as soothing as possible, his own little sanctuary from his semi-crappy job and the teen shelter where he volunteered.

His gaze traveled to the traitorous laptop. It’d promised him untold riches of boyfriends and the one guy who’d light up his world. The one who’d hold him every night, tell him about his day, care about what Rich did during his and, finally, build a life with him that would last forever. Oh, and they’d be madly, passionately in love and fuck like bunnies.

Instead, RealRomanceForMen.com had turned out to be worse than Grindr. He’d lost count of how many pointless first dates he’d gone on, but he knew it’d easily soared into the double digits. He’d only turned to it after the last guy he’d met in a non-virtual setting and had really liked a lot had not only never given him a chance but had found someone else.

The guy was super sexy, not too much older than Rich’s twenty-six years, and he was all about helping people. He’d even ended up being hired as the executive director at the new LGBTQ shelter that was close to being completed, which was how they’d met originally. But Brett had found his one true love. Or Cole had found him. Either way, no one had found Rich.

After eyeing his computer suspiciously one more time, he tossed his sweater over it as if declaring it dead. His Kindle called to him. If nothing else, he could at least have a book boyfriend.

This is book six in the Sun City Uniforms series and is a re-release. I enjoyed this book just as much as I did the first time. This re-edited and extended version was awesome. The changes were subtl...

I admit that Searching for Shelter took me a bit by surprise,because Morticia Knight amped up the sweetness for this story. I'm not saying it's a bad thing,only that it was a bit more than I'm used...

Share what you thought about Searching for Shelter and earn reward points.