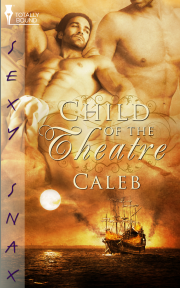 Child of the Theatre

His life in the theatre had prepared him for the love of his life.

Orphaned in infancy and raised by the great comedy actress Dorothy Jordan, Sim Treagar has lived all his nineteen years among the high drama, greasepaint and shabby theatrical glamour of the Drury Lane Theatre.

When Lieutenant Gervase Levison comes to the theatre to deliver the Royal Duke's congé to Sim's adoptive mother, the two men fall immediately into a passionate love affair.

But Gervase's powerful family oppose their love and seek to use it against the Lieutenant, in a high-stakes game of rumours, scandal and thwarted inheritances. When Gervase is sent to sea, his prospects are safe but Sim's heart is broken. Can they ever hope to be reunited in a love his handsome sailor's family can't countenance?

“The barmaid now for your protection prays,

The final lines of the play floated upstairs to the dressing rooms. The orchestra struck up and the applause was thunderous. Smiling slightly, Sim began lighting the working candles beside the make-up bench. He poured a glass of sherry as Dorothy Jordan came sweeping into the dressing room, angrily tearing off her wig.

“He never gets that bloody line right. I shall have to speak to the stage manager—again!”

Sim rolled his eyes in mock horror. “Madam, I am shocked. Never have my virginal ears been sullied with such language.”

Mrs Jordan gave a snort of laughter and downed the sherry in one gulp. “I could do with something stronger, Sim.”

“Better leave off the gin, ma’am. You have another performance in a couple of hours.”

She said, “Well, help me out of these damned stays. They’re killing me.”

She grunted while Sim unlaced the whale-bone armour that encased her. When he had finally removed it, she gave a great sigh, slumped into the seat in front of the large mirror and gazed at her reflection. Sim poured her a second glass of sherry and placed it by her. While he busied himself tidying up the wig and costume she had dropped casually on the floor, there was a knock at the door. Before Sim had a chance to open it, a large, florid figure insinuated himself into the room.

“Dolly, darling,” he said in his most mellifluous voice, “I do apologise for that slip.”

“More than a slip, Henry,” Mrs Jordan said tartly, “You could have driven a horse and carriage through the pause.”

“I know, I know,” he said. “I am prostrated with remorse. But I must admit, you covered beautifully. The groundlings simply adored that piece of business you inserted.”

She turned to him. “Henry. I can’t keep covering for you every time. You must try to remember.”

“I know, I know, and of course you are right as always. I make you the promise that this will be the last time.” He took her hand and kissed it. “Am I forgiven?”

She smiled. “You know you are.”

“Thank you, my dear. Well, � bient�t, I must be off. My public awaits.” He paused by the door that Sim politely held open for him. He looked at the young man and patted him on the cheek. “Dolly, m’dear, when are you going to let me have this delectable young Adonis as my very own dresser?”

“I want him to survive the week, Henry.”

He chuckled. “You are a naughty puss.” And he disappeared.

With a smile, Sim said, “Was that meant for you or me?” She laughed her famous, throaty laugh. “Me, I think, but with Henry you never know.”

Sim chuckled and was just about to shut the door when he saw Tommy, the assistant stage manager, signalling to him from the corridor.

Tommy was large with excitement. “Simmy, there’s a toff wanting to see herself. He’s in the green room. Said he wanted a private meeting with her.” He gave Sim a knowing look.

Tommy shook his head. “Nah! Left his card for her, though.” He handed the card over.

Tommy gave him a significant look. “Navy, I think.”

The significance was not lost on Sim. “Ah. I’d better tell Mrs Jordan.”

Tommy winked at him and disappeared down to stage level.

When Sim entered the dressing room, Mrs Jordan said querulously, “I fear this may be the last time I play Kate Hardcastle.”

“I have heard rumours of a revival of School for Scandal next season.”

She sighed. “Well, I suppose Lady Teazle is a marginally better role than Kate Hardcastle.”

He laid the card discreetly on the bench beside her.

She gave a hollow laugh. “I’m certainly getting too old for that.”

His reply was sly. “Nay, madam. There may be snow on the attic, but there’s still fire in the basement.”

She laughed, picked up the card and gazed at it short-sightedly. “Lieutenant Levison. Do I know him?”

She gave him an exasperated look. “Oh, spare me your discretion. A go-between, think you?”

“Very well. Look out my wrapper—the apricot silk. Then you’d better go down and bring him up. Give me ten minutes. God knows I’ll need every moment. These days, it gets harder and harder to look merely presentable.”

Sim shrugged into his coat and descended the spiral staircase to the green room. There were some people there, but the naval lieutenant stood out, standing awkwardly apart from the others.

The officer turned at the sound of his name, his long cloak swishing as he did so. Their eyes met. Sim blinked. The lieutenant was a little taller than Sim and had a harsh countenance and eyes of breathtaking dark blue—almost purple.

Sim smiled politely. “Mrs Jordan apologises for keeping you waiting, sir. If you will be so good as to follow me, I shall take you to her.”

Caleb was born and bred in Queensland, Australia. He started out his working career as an architect but left that job to join a ballet company as a costumier. Along with a taste for the novels of Jane Austen and Georgette Heyer, costuming has become the consuming passion of his life.

He took up writing because of the ol' I-can-write-better-than-that syndrome and tries to combine writing with his love of period costuming, attempting stories in the Gay Regency Romance genre. Child of the Theatre is his first published work.

The Child of the Theatre' has everything one would expect from a historical, Victorian novel—adventure, betrayal, passion, heart break, forgiveness, and a happy lover's reunion...I highly recommend thi...

Share what you thought about Child of the Theatre and earn reward points.