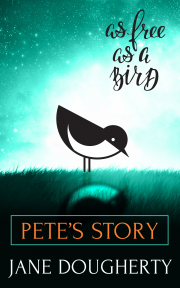 A free read telling Pete's Story, this is linked to The Pathfinders series by Jane Dougherty.

Jane Dougherty writes stories where the magical and the apocalyptic mesh, where horror and romance meet, and the real and the imaginary cohabit on the same page.

Jane was born and grew to her present height in Yorkshire then was dragged into the sleazy underbelly of existence--work--in London. Even though it involved drinking lots of wine and getting paid for it, she rebelled. She escaped to Paris, fell under a powerful enchantment and has been wandering from French pillar to French post ever since. In the strange world she inhabits, she writes the rules, creates the landscapes, the people and the magic. She also bends the rules of physics, plays Cupid and hands out happy endings to deserving characters.

Share what you thought about Pete's Story and earn reward points.