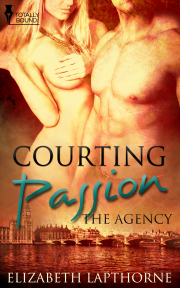 Book 2 in the The Agency series

Garth and Katherine try to find the mole within the Agency. They must follow the trail of two killers and use their wits and growing trust in each other to survive their mission.

Katherine Hitchins initially believes Garth Spenser to be the mole she is trying to uncover within the Agency. With the casual arrogance of so many cowboy Agents he fires her senses. Chemistry crackles between them. She finally has to admit this isn't the traitor she seeks.

Together they must race to uncover who the real mole is, while trying to find the man responsible for kidnapping and torturing Garth's partner and murdering Katherine's old partner in cold blood. As they get closer to the answers they seek the sexual tension between them skyrockets and soon they both find themselves breaking more rules than they had ever thought possible.

Garth locked the two goons into the back seat of their car. Tennent had a bullet in his shoulder so, with his wrists cuffed, there appeared to be no fight left in him. Dixon—currently unconscious—was similarly restrained but posed even less trouble. With both men secure, Garth watched as Jack Berwick assisted Victor into the other car.

Victor, his mentor and one of the few people on earth who truly mattered to Garth, paused as the back door opened. Garth caught Victor's gaze as he looked up at him. Garth nodded at him. Victor acknowledged it and tilted his head in return before making slow, tender progress into the car.

Victor's face was badly cut and bruised from repeated beatings. One eye was swollen shut. Caked blood stained his face. He cradled one arm, the collarbone having been broken, probably in multiple places from the bruises that were already blossoming.

Garth noticed his mentor also walked stiffly, with a noticeable limp as if he wanted to curl in on himself, but still refused to show even a hint of weakness. Garth had a feeling there were other broken bones and internal damage not easily visible. Regardless of all this, Victor was alive and that was the important thing.

They had exchanged a hard drive with all the sensitive data Katherine had mentioned during Garth's 'interrogation' for Victor's life. Their enemy had escaped. Superficially, Oscar Jennings resembled what Garth might look like in twenty or thirty years' time. From the front, in clear light, Garth believed the resemblance between the two men was passing at best.

Despite that, Garth could understand why a few brief glances had the witnesses making statements that pointed fingers his way.

Garth returned his attention to Katherine. Her lower lip trembled as she assisted her partner's comatose body into the back of the ambulance. Two medics crouched on either side, monitoring Tarek's vital signs. With the medics in control there was little he or Katherine could do to assist her partner in any way. Garth had moved aside to give her some time and privacy to say her goodbyes before she handed Tarek's care over.

A ricochet had caught Tarek in the neck during the firefight exchange. They had rushed to stop the bleeding, but it had been touch and go. Tarek clung to life, he needed a hospital's care.

That's the way this industry worked, Garth thought, not unsympathetically. One day you're here, the next you might not be.

Katherine stood and Garth couldn't help himself, he let his gaze linger over endless curves. Soft hair the colour of spun gold was pulled back into a tight chignon. She knelt beside her partner, her large, expressive brown eyes filled with unshed tears.

Desire hit Garth hard. Katherine's full, round breasts strained against the buttons of her shirt. His hands itched to cup them, to hold her luscious body close, to press those silky mounds together and thrust his hard prick up through them.

With effort, Garth pulled himself back under control as Katherine clambered to her feet, pressed her fingertips to her lips then transferred the kiss to Tarek's cheek. She climbed down from the ambulance and waved to the driver that he was clear to go. The siren wailed as they pulled away, the vehicle moving at a fast pace.

Unsteadily, Katherine crossed over to him. Garth rested a hand on her shoulder and guided her away from where the van had stopped. They walked out on to the grass and between the shrubbery that had been planted to separate the green fields from the parking lot.

"Back-up will take at least another ten minutes to get here because of the traffic," he said. "Let's sit on the grass. The place is deserted now. Tarek will be fine. He's in the best possible hands."

"He can't go through all of this for nothing," Katherine insisted. "I won't let this be a waste. He's my partner."

Garth smiled, though it wasn't a humorous gesture. He understood all too well the mixture of fear, anger and overwhelming duty Katherine grappled with.

"Ready to throw out the rule book?" he teased.

She nodded. "Absolutely. It hasn't helped a damn bit on this bloody case. Why not toss it aside?"

Garth's heart twinged for her. He wanted her badly, yes, but more than that—she touched him. Her fierceness, her warrior's courage. She could match him, blow for blow and keep up with him stride for stride. Without conscious thought, he palmed Katherine's jaw, turned her mouth to his and kissed her passionately.

the scenes between the two will scorch the page...I am looking forward to reading more of this series...

Share what you thought about Courting Passion and earn reward points.