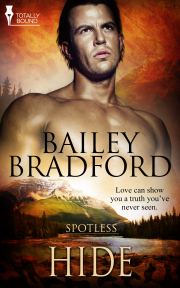 Book 1 in the Spotless series

Publisher's Note: This book is linked to the Leopard's Spots series and follows on from Isaiah.

Adal stared at the unconscious man. Dorso had woken up a few minutes here and there, but he’d only blinked and asked what had happened before sleeping again.

Dorso Rodriguez. Adal liked thinking the name, and he liked saying it softly. The letters rolled off his tongue, and inside, he went all warm and tingly when he spoke it.

He went all warm and tingly every time he looked at or touched Dorso Rodriguez, for that matter.

No friends at all. For a moment, Adal wondered what it’d be like to have people care about him.

“Steven,” he whispered. There was one person in the world that gave a damn about Adal. Steven, his half-brother. Like Adal, Steven had no last name. They were both half-breed shifters, despised by their society for a luck-of-the-draw birth neither of them had chosen.

But their father Bashuan, a full-blooded Amur leopard shifter, had bred with two puma shifter females, and hence Adal and Steven had been born.

Steven first, Adal a few years later. Sadness threatened to overwhelm him, so Adal went back to focusing on Dorso. Dorso was, after all, his mate—a fact Adal was still struggling to accept. He hadn’t thought halfbreeds had destined mates. Would have denied it repeatedly, except for the warm fuzzies he got from even being near Dorso. Perhaps he’d been told wrong, but Adal didn’t think so. Looking at Dorso, everything in him called out to some deep, hidden part of Adal.

Adal touched Dorso’s fluttering pulse point. The skin of his neck was warm and darkly tanned. “Wake up, please,” Adal urged. The silence and utter aloneness was driving his nerves into the ground. “Please,” he added again as he stroked Dorso’s chest.

He’d dared to remove the man’s shirt and pants, along with his boots. That had left Dorso in black boxer briefs and red crew socks with pink hearts all over them. Adal was charmed by those pink hearts, and he couldn’t explain why. Maybe because it made Dorso unique, or unlike any stereotype Adal could imagine.

Dorso’s chest was broader than Adal’s, his upper body more muscular. He had swirls of dense brown chest hair, not so thick that his large cocoa-colored nipples were hidden, though.

Adal wanted to touch those nipples and see if the skin there was as smooth as it appeared to be. He didn’t do any such thing. It was wrong to fondle a guy when he was sleeping, even if the man was Adal’s mate. Dorso knew none of that, not what Adal was, or what they were to each other. Adal wouldn’t take advantage—he wasn’t a pervert or without morals.

He did look—at Dorso’s chest, at the deeply sculpted abs, the slightly protruding belly button, the narrowing line of hair that disappeared beneath Dorso’s underwear. There was a substantial bulge beneath those briefs that made Adal’s mouth water when he glanced at it.

Adal did know that the light sheen of hair on Dorso’s legs, chest and arms was softer than he’d expected. He knew Dorso’s elbows and hands were chafed, likely from working on engines and crawling around under vehicles. There was a long, fading scar on Dorso’s right knee, from an old injury or surgery of some sort.

Another scar higher up, on Dorso’s belly, was probably from an appendectomy. Shifters didn’t have such issues, but Adal had seen that scar and panicked. He’d called Bae Warren, who was mind-boggingly nice, all things considered, and Bae had told him what an appendectomy was.

It made Adal’s guts hurt just thinking about it. Humans were just so fragile, it was frightening.

Especially when one of them had been knocked unconscious and wasn’t waking up fast enough to suit Adal. He had no idea about human healing times, but a shifter would have been over the head injury in a matter of a few hours.

Dorso had been hit the day before.

Steven didn’t know then. He didn’t know Dorso was my mate. If Bae and Isaiah hadn’t told me, hadn’t confirmed what I was feeling was something real—

Adal wasn’t going there. He’d had too much happen in the past twenty-four hours himself, too many changes to his life that he’d never, ever have thought would happen.

Steven had left him, vowing to kill their father Bashuan before Bashuan could send more guards out to kill Adal and Steven. Adal was very much afraid Steven would fail. Bashuan was evil incarnate, the rest of the world just didn’t know it yet. There was a chance that Steven would survive, but Adal couldn’t picture his life with Bashuan no longer a threat to it.

He had no intention of letting his mind meander into the darkness, as it so frequently did. There was hope, a spark of it at least, burning in Adal’s soul.

If he and Dorso could vanish somewhere Bashuan would never find them, if Steven did succeed in killing Bashuan…if if if! So many if’s, and nothing I’m sure of, except that Dorso Rodriguez fascinates me as no one has before.

Adal curled the fingers of one hand against the cool chest hair. “Please,” he begged again with less pride than before. “I don’t want to be alone. I don’t know how to be alone here. If I were locked in our room or chained to the wall, I would know how to accept that.” He sank into himself then, retreating from the horrors of life into the beauty of imagination. His was probably quite limited, but he could fantasise about being free, or being someone else, someone who’d been born into a family and was loved.

Dorso coughed, or cleared his throat, Adal wasn’t sure which and either way, it startled him into a yelp as he tumbled off the bed. His butt hit the floor and the impact jarred him all the way to the top of his head.

“What the hell?” Dorso rasped. “Goddamn, my head…”

Adal scrambled up to his feet. His heart alternated between fluttering and slamming as he looked into Dorso’s pretty pale green eyes. And found himself unable to speak beyond, “Uh.”

Dorso blinked slowly, as if he wasn’t going to actually open his eyes again. “What happened?” he asked, his voice just as gruff and broken as it had been the first time. He reached up with a shaky hand and touched his left temple. “Fuck.”

The grimace he made and the way his skin lightened a couple of shades knocked Adal from his stupor. He caught Dorso by the wrist and gently tugged his hand down. Dishonesty didn’t occur to him. “You were hit, by my brother Steven.”

That wasn’t as easily answered, not because Adal was evasive, but because it was complicated. The truth was going to make Steven, and himself, look like the worst sort of people. Adal just hoped Dorso would let him explain it all, eventually.

Share what you thought about Hide PRINT and earn reward points.