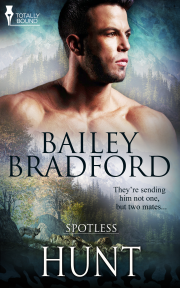 Book 2 in the Spotless series

Steven was on a mission he knew could cost him his life, but instead he might find himself truly living for the first time.

Steven has spent his life protecting his brother Adal and serving their sadistic father, Bashuan, as a means of bargaining for both of their lives. He’s done things no man should have to do, things no shifter should have to do. Throughout it all, Bashuan has hated him and Adal for being halfbreeds, part puma and part leopard. Doesn’t matter that Bashuan is responsible for their mixed blood. There’s no logic to his hatred.

But Adal has found a mate, and Steven is going to make sure his brother gets the opportunity to live out a normal shifter life with the man. He’s going to try his best, anyway. Steven is aware that Bashuan may win, that evil could triumph the new-found good in Steven’s life. He’s seen it happen—good guys don’t always survive.

What Steven forgets is that he’s not nor has he ever been the good guy, and the Fates have a reward for him that will break the rules of all known shifter matings. They’re sending him not one, but two mates, and both men will fight with him and for him—and nothing will keep them from Steven.

Publisher's Note: This book is linked to the Leopard's Spots series. It is part of the Spotless series and is best read in order. This book was previously available on the author's blog. It has been re-edited for release with Totally Bound Publishing.

From behind the thick copse of trees, Steven watched the veterinary van drive off toward Denver. He’d gotten out and shifted, ran—but only far enough so that Adal and the others would believe him to be gone. Gone, and stronger than he really was.

Stepping out of that van and leaving his brother had taken every bit of Steven’s strength and determination. He knew he’d never see Adal again and he hoped—and prayed to every deity in existence—that he’d left his brother in safe hands. If not, there wasn’t a harsh enough hell for Steven to be cast into, not in this life or whatever came after.

The tail lights were bright small pins of glowing red that held him mesmerised, his mind blanking as he couldn’t quite deal with what he’d gone and done. Adal had always been his. Without him, Steven feared he had no soul. He’d killed to keep his brother safe and hadn’t batted an eyelash at doing so. Bashuan had known of Steven’s devotion to Adal, and he’d never hesitated to use it against him.

And now Steven had given up Adal, the best part of him. He pulled back from that dangerous admission as the van turned, those tail lights blinking brighter then vanishing out of sight.

Steven took a moment to gather himself. He cradled his head in his hands and tried to formulate a plan. Find Bashuan, kill him—that seemed to be the best he could come up with. The problem was, he didn’t believe he could do it. There was no moral issue, though. Bashuan was strong, smart and well-guarded. Steven was just Steven. He had no weapons, no other people to back him up. In his and Adal’s lepe, or pack, they’d been outcasts. Hated for being different, halfbreeds. It didn’t matter that the lepe leader was their father—all that mattered was that they were not pure Amur leopard shifters.

There’d been a time when Steven had dreamed, had hoped for a future unlike the one he now lived. Back when he’d been a young child, he’d not yet realised how dark his fate was. He’d dreamed of being something, someone, exceptional. When he’d been handed over a little brother to care for, that dream had expanded. Though there were barely five years between him and Adal, Steven’s world had changed the day Adal had been shoved into his arms.

Steven had wanted to be better for that small babe with the solemn eyes.

Stop it, Steven scolded himself silently. Thinking about the past was useless unless it provided him with an infallible plan to kill Bashuan. Steven had never been given to theatrics or retrospection. He wasn’t about to start now. If he couldn’t kill Bashuan—and he didn’t believe he could—that was much of the battle lost already.

That Adal had a mate had come as a shock, but Steven had to trust it was true. All the years he’d protected Adal, all the hopes he’d had for him, would be possible if that lumbering idiot Steven had knocked out proved to be Adal’s mate. If Steven happened to survive his as of yet unplanned attack on Bashuan, there would be some very awkward dynamics between him, Adal and Dorso. Steven sure as hell wouldn’t easily forgive someone for clocking him like he had done to Dorso, and that was just one of the offensive actions he’d taken on this last assignment from Bashuan.

But what was done was done, and he wouldn’t be seeing Dorso or Adal again. Bashuan would likely find him before Steven ever got near the lepe. He’d be looking for them when they failed to check in.

Weak, hated, freaks. Bashuan made sure they heard it often enough. There was no need for them to live if they were not serving Bashuan. In the past, Steven had believed himself to be anything but weak. He’d thought he might have a strength of body unknown of anyone in his lepe.

A fantasy was what that had been, because Bashuan was right. He was weak—Steven had felt it the past days, like a slow drain of air out of a tire. Whatever the cause of it, if it was from the pills Bashuan had them taking, it was still a fact. Steven tired faster than before, his muscles cramped and ached. He didn’t know if he’d get better now, or if the damage was done.

Either way, as he and Adal had been on the pills for a long time, he didn’t think temporary side-effects would heal up quickly. They’d taken a while to cause the changes. To believe he’d be stronger and healthier in a day or two was foolishness, and it wouldn’t keep him alive.

If he was going to die, he wasn’t going to do so easily. Steven had never done anything the easy way in his life. He stood up and dusted off his knees before turning to the north. A sniff of the air brought a chill to his skin. He was naked, unarmed, without any resources at all. But Adal was safe, hopefully, and with people who might possibly be able to help him if the pills had done permanent damage.

Not fatal damage, Steven wouldn’t believe that. Not for Adal. As to his own life, as long as he found a way to keep his brother safe, that was what mattered.

Steven wasn’t like Adal, who was pure and kind, a gentle soul. He wouldn’t change who and what he was. Adal was the good one, and Steven…wasn’t.

Steven tipped his nose up to catch a better whiff as the wind blew, carrying with it cooler temperatures. The mountains would be dangerously cold at night, but in his leopard form he would be okay. That should also take care of his lack of food. He’d never failed in a hunt.

But he’d never hunted Bashuan before, either.

Steven glanced back in the direction the van had gone, despite his best effort not to. Then he closed his eyes and let the shift come over him. Seconds later, his sleek black form, rippling with power and deadly intent, slipped into the dense forest to begin the most important journey of his life.

Share what you thought about Hunt PRINT and earn reward points.