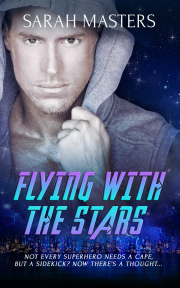 Flying with the Stars

Not every superhero needs a cape!

Hello. My name is James and I’ve just recovered from a break-up with the awful Gareth, who left me for a man who has nipples the size of cigar stubs. How’s that for a bash to my self-esteem? Gareth did me a favor, though, and now it’s time to go after the man I really love, but first I need to crash out of my morose shell and go clubbing.

After I bump into my crush—ahem, neighbor—Ronnie, and find myself babbling stupid things while ogling him as he stands in his doorway wrapped in nothing but a towel, I begin to wonder whether true love will ever come my way if I keep acting so amateurish in the relationship department. But Ronnie accepts my invitation to join me at the club, and what happens afterward both amazes and freaks me the hell out. The man of my dreams is like no other, and he might well need me as his sidekick in the future if things keep going the way they are.

With a nasty thug to deal with and a robber stealing a woman’s handbag, Ronnie has to let his inner force free and right the wrongs. Can I handle this new life? And, more to the point, can Ronnie? Who needs a cape and a mask when Ronnie has power at his fingertips and a brilliant ability to whisk us here, there and everywhere so we’re flying with the stars?

Publisher's Note: This book has previsouly been released as part of the I Need A Hero anthology with Pride Publishing.

It had been a while since the puddle of tears around my feet had dried up. All right, that was a bit of an exaggeration, but a break-up was never easy, was it? I’d been to hell and back and was now determined to find myself a new bloke, although new was hardly the right word. I wasn’t sure if the one who had been there all along would be interested in me, but in the meantime, I was going to go out for a drink and a dance to get myself feeling more like the old James. The pre-Gareth James, who was confident but not big-headed. Did that version of me even exist anymore? I didn’t know, but I could try to find him again, couldn’t I? Be him?

Deep down, though, my confidence was still a bit ropey, but I’d told myself day after day lately that I could do this, get back in the saddle. A bugger of a little whisper in the recesses of my mind said I couldn’t. Now luckily, those kinds of whispers made me stubborn. Made the diva in me come out.

So tonight I was off to Dance Fest, where I’d always felt at home, but the problem was, Gareth liked the place, too. There was a strong chance he’d be there, but I was fucked if I was going to hide away any longer. I’d bump into him at some point, was bound to, so now that I felt stronger emotionally, I might as well come face to face again with him tonight.

I’d already done my hair, black quiff held up by wax, and my outfit consisted of jeans, a tight gray T-shirt and comfy black shoes. I’d had to hype myself up in order to get ready tonight, but now I’d convinced myself to dive back into the game I reckoned nothing was going to get me down.

Shame I’d let things get me down after Gareth, beating myself up, blaming myself, but since the fog of self-pity had lifted, it was clear that I couldn’t have made him stay. He’d been intent on leaving me for that bloke with nipples the size of cigar stubs and there hadn’t been a thing I could have done to stop it.

“Oh, we’re not going down that road again, are we?” I muttered and zipped my jacket up. “And fuck it, if he prefers cigar stubs to slim cigarette filters, he’s most welcome to them.”

Many times over the past couple of months I’d told myself that in order to change my insecure way of thinking, I needed to grow my confidence back—like it’s a plant or something, Jesus—so that the doubting comments in my head became fewer and fewer and were eventually replaced with positive ones. Difficult as that might be, it was a journey I was willing to take. Anything to make me grab life by the sexy, hairy balls again and enjoy myself instead of drowning in despair.

And the despair. It had been enough to send anyone round the bloody bend.

My drama bone has certainly healed and is in full working order.

I gave myself the once-over in the full-length mirror. “Christ, you look like…well, I don’t know. Someone desperate, needy.”

But I was desperate—desperate to get my love life back on track. Desperate to be my old self again—the lively, up-for-a-laugh fella who said inappropriate shit but got people smiling.

I grabbed my wallet on my way out of the bedroom. My flat was a warren with rooms sprouting off the central hallway. The front door was at the end, so I gave myself a good talking to and walked down there, eager to be out of this place. I wanted to thrust myself into the night, be with people I’d avoided socializing with for too long now, and get rip-roaringly pissed up on some cocktails with names like Take Me, I’m Yours, or Up for Anything Once.

And I was. Up for anything once. And if it meant trying the onces with a certain bloke, all the better.

He’s just a mate, though.

I left the flat and, after locking up, went down the stairs as though fire was chasing my arse. Funny how I hadn’t wanted to leave the building earlier, how my moods went haywire without warning. Now I was on my way I couldn’t wait to get outside, to feel the cool autumn nip of the air and let the wind blow away all those wankerish cobwebs that had clung to me since Gareth had ditched me. Before I could escape to my freedom, though, the door of the downstairs flat to my left opened, and Ronnie stood there. In just a towel. Which clung to his hips. The bloke who was just a mate. The one I wanted to be so much more.

Not for the first time, I wondered what his dick was like, hidden beneath the white terry toweling. I’d had a hankering for him for a while now but realized long ago that he wasn’t interested in me. Okay, I’d been seeing Gareth for six months, plus there had been my two months of getting over him, so maybe Ronnie had kept his distance, but still, I didn’t think I was on his radar in the slightest. He’d been nothing but matey toward me, offering to get some shopping in or bringing my mail up so I didn’t have to leave my flat other than to go to work.

I’d been half in love with him the moment he’d moved in.

“Hi,” I said, conscious that time had passed since he’d appeared in his doorway and I’d been staring at his abdomen for longer than was polite. “Nice stones.” I nodded at his midsection then, mortified I’d said that out loud, scrabbled through the mush my mind had become to find something to say to cover my mistake.

Ronnie looked down at himself. “Sorry, I wasn’t aware my stones were on display.” He laughed and smoothed his hands over the towel. “Nope, all covered up.”

Stones. Balls. Fucking hell. Could I have said anything worse?

He stared at me, eyebrows raised.

“You know.” I nodded at his six pack again, praying I could act like a normal bloke and not one who was desperate to become more than friends with him. “Your pecs. I’d like to peck your pecs.”

What the hell is wrong with me?

Heat flooded my face. I was doing a damn fine job of putting him off me and wished I could rewind, zip upstairs then come back out and start this conversation again.

“I wanted to ask you something.” He stared me up and down.

Sarah Masters is a multi-published author in three pen names writing several genres. She lives with her husband, youngest daughter, and a cat in England. She writes at weekends and is a cover artist/head of art in her day job. In another life she was an editor. Her other pen names are Natalie Dae and Geraldine O’Hara.

Each story has a seriously unique take on the superhero theme... refusing to let go until I finished the very last page. This is a fantastic anthology that I would highly recommend to m/m romance reade...

Superheroes are a special favorite of mine, but to see one of their stories told from the point of view of the “sidekick” as well as the superhero himself, is a special treat… James is a bit o...

Share what you thought about Flying with the Stars and earn reward points.