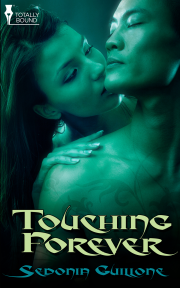 Ex-monk Tenzin Gayatsu has a secret - he was attacked by a demon and made a vampire. A living vampire. The raging desires for blood and flesh send him looking for a teacher, one who can teach him to make desire his ally. He finds that teacher in Lily, but cannot reveal his secret shame especially once she tells him of her hatred for vampires.

Tenzin's loving hands and kisses ease away the wall she's built around her heart. He brings her to heights of ecstasy she's never known before. Yet just as she's beginning to trust him, a tragic event reveals that Tenzin is a vampire, a member of the race that once enslaved and tortured her.

Lily wants to push him away but she cannot. Another vampire is out to kill everyone Lily loves and she needs Tenzin's help. She must trust him and pray he is the man he claims to be. She must hope he will truly be the jade dragon she so desperately needs…

Publisher note: This book has previously been released with another publisher under a different title. It has been re-edited and expanded for release with Total-E-Bound.

Lily led Tenzin to her bath chamber where Fei Liu had filled the tub with steaming, scented water. Fei Liu stood, her head bowed, an empty bucket hanging from her hands. From the corner of her eye, Lily saw her favorite Tigress cub steal a glance at Tenzin.

A sliver of guilt stabbed Lily that she was keeping Tenzin to herself. Normally, she gave Fei Liu a chance to practice the exercises with a man of whom she had approved. Lily told herself that Tenzin was too green, too in need of preparation, and must remain with the experienced teacher.

“Do you need anything else, Mistress Lily?” Fei Liu’s voice was soft and conveyed her admiration of the man before her.

“No, thank you, Fei Liu.” Lily made certain her tone dismissed the woman, gently but firmly.

Fei Liu nodded and shuffled from the room on her bound feet.

Alone with Tenzin, Lily was eager to see his body naked. Her heartbeat sped up slightly, and she took a deep breath before turning her attention to him. When she did, the Tibetan stood, hands at his sides, his gaze humble yet still simmering.

She appraised him a moment longer. So far, the fortune sticks had spoken the truth. Tenzin’s eyes radiated compassion and devotion while his body emitted a sense of coiled strength and power, even through the worn, baggy clothing.

Before having him undress, she scanned every inch of his sleek, muscular body, lingering on the sheen of his dark golden skin, the carved strength of his arm muscles, his high dignified cheekbones, as well as the sensuous pout of his lips surrounded by the darkness of clean shaven cheeks and jaw. Lily’s body tingled, and already she felt her yin dew rise, as it had in the gambling parlor. Her female energy rendered her body softer and more pliant in accord with his male hardness. “Undress, please,” she said, affecting the silky tone customary for a Tigress in the process of seduction.

Tenzin’s hands went to the frog closures of his vest. Thick, strong fingers worked open the wooden toggles until the rumpled fabric fell open, revealing his smoothly muscled chest. His pectorals were wide and round, topped with dark, cocoa brown nipples.

Lily watched him slide the vest off, down his strong arms, gazing at him with the appreciation intended to bolster his confidence. In this instance, her enjoyment was entirely sincere, and when his cheeks colored slightly, she averted her eyes enough to allow him to collect himself.

Unlike most other men she’d practiced with, Tenzin shed his clothes slowly, with a sense of modesty that made him seem vulnerable. With each small movement, the cords of muscle in his forearms flexed, as did the carved muscles of his abdomen. Her heartbeat rising, Lily stepped forward and took his vest from him. She folded it and set it on a nearby chair before turning to watch him remove his pants.

With his eyes downcast, he pulled the drawstring of his pants and held the waist so they wouldn’t drop at his feet. His thigh muscles clenched as he lifted each foot and carefully stepped out of his pant legs. Again she reached out and retrieved his pants, resisting the urge to stare blatantly at his round, hard buttocks.

He surrendered his clothing, an uncertain look moved across his eyes. Lily allowed her fingers to brush against his, enjoying the surge of yang force she sensed in him. The musky scent of his skin mingled in the air heated from bath water and herbs. Her insides jumped, and she took a deep breath as she set the remainder of his clothing on the chair.

She turned and nearly gasped. Yin surged in her body, and she felt her feminine instinct to melt against Tenzin’s hard physique. It wasn’t time yet for that. She turned halfway from him and gestured toward the tub. “I hope the water is to your liking,” she said in a silky voice.

“It looks very nice,” she heard him say. “I am grateful for the luxury.”

His gratitude sounded genuine, and this only fueled her natural instinct to join with him. Lily surreptitiously squeezed her hands into fists, and dug her nails into her palms, anything to stem her yin tide and distract herself from staring at his naked physique.

The lower part of the man was as beautifully formed as the top. His trim waist tapered into narrow hips, which drew her gaze to what was in the center. His dragon was thick and full, just as the contours of it through the loincloth had hinted. The reddish-gold shaft stood in a partial erection, and the tapered head, plump and very suckable, had already seeped a glistening dragon’s tear at the tiny opening. The yang droplet made her very mouth water to lick it off.

Tenzin’s dragon twitched as if aware of her gaze on it. His body was nearly hairless with the exception of a small ebony thatch around the base of his dragon. That sight roused the most intense need within her to taste him, to feel what looked like velvety skin over the hardness of male muscle.

Lily allowed herself a brief perusal of the full sac of his yang pearls below his dragon, then slid her gaze down his thick, sloping thighs and calves.

She cleared her throat. “Go on. Get in.”

He nodded. “Thank you.” His eyes reflected uncertainty, but he turned, obedient, and stepped into the tub, giving Lily a perfect view of his bottom.

She moistened her lips with the tip of her tongue. Tightening her fists, she wondered at the effect he was having on her. The only explanation certainly was his overabundance of yang, causing the imbalance happening within her own body.

Tenzin held the sides of the tub, strong fingers gripping as he lowered his powerful build into the water. Judging by the delicious scent that emanated from him and his obviously clean appearance, he didn’t need a bath, but the ritual of washing a man, relaxing him, ministering to him as she was about to, was what a Tigress did with her partner. The more at ease he was and comfortable, the more freely his yang would flow.

She knelt by the tub. Tenzin’s male scent, diffused into the air by the steamy water, surrounded her. She cleared her throat with as delicate a sound as she could, in spite of the sudden tightness.

Picking up a washcloth, she dipped it into the hot water and smoothed it across his back. The water streamed down his muscles. She wet the cloth again and ran it over his neck.

A tiny sigh escaped the Tibetan’s throat. He took a deep breath, and his shoulders sagged ever so slightly. His eyelids fluttered, and his fingertips relaxed their grip on the sides of the tub.

She frowned. Could he be nervous? She never thought of men as nervous, especially with women, the power-wielding creatures the other sex were ... she couldn’t imagine it. Men had the power to determine whether a girl underwent the painful, harrowing process of having her feet bound, or of being enslaved for life to a man who could beat her with impunity. And yet, she was forced to admit, she’d never met a man who’d bowed down before her as this one had. She could only imagine he would be nervous about being with a woman again after his long abstinence.

Lest he see her musing, she worked her lips into a smile and continued to wash him. With a hand on his shoulder, she bid him to lean back in the tub. The hard muscle quivered under her fingertips, but he yielded under her touch, letting her guide him to recline in the tub.

A slice of heat went through her middle, and Lily avoided his eyes until she could collect herself. When she did look at him, his gaze locked with hers. He regarded her through half-closed lids. His amber irises simmered with the strangest blend of wonder and need. Droplets of water beaded off his skin, and a sheen of moisture from the steam made his skin glow. He parted his full soft lips as if he were about to speak but remained silent, and she could hear the steady pulse of his slightly ragged breaths.

Swallowing past the dryness in her throat, she lifted her hand from his shoulder. “Give me your hand,” she said softly.

He slid up a bit in the tub, giving Lily a glance of his dragon, harder than it had been before. The plump lobes of the head were visible even through the depths of the water. With that wondrous gaze still on hers, he lifted his hand, surrendered to her hold.

Lily took his hand between hers, smoothed her fingertips gently over the callused skin of his palm, and then looked at it. Tenzin’s fingers were wide and strong, the hands of a man who worked hard, yet whose nails were perfectly clean and trimmed. A strange blend of contradictions, this man was. He appeared poor, but his worn clothing was clean and smelled of the spicy musk that he carried on his skin. Perhaps he’d simply cleaned himself up before presenting himself as a prize in the card game. That seemed the most logical answer.

She began to massage the palm of his hand, pressing gentle circles into the soft flesh below his thumb. Again, he sighed, the soft whoosh of breath almost a moan. His fingers curled slightly, and his hand grew more slack between hers. Lily couldn’t help the flush of pleasure she felt in seeing that he seemed to enjoy her ministrations so much. 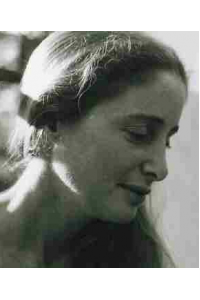 This was erotica like I have never had the pleasure of reading before...Excellent storyline and plot twists and turns!

Share what you thought about Touching Forever and earn reward points.