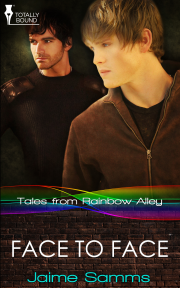 Book 4 in the Tales from Rainbow Alley series

They say home is where the heart is. They never mentioned rusty fire escapes, hustling or dumpsters. They never warned how fragile hearts could be, either.

They say home is where the heart is. For Skate and Denny's sake, they had better be right, because all they have is each other.

For eight months, they've been running from past mistakes, a vengeful gang and their own inner demons. But living on the street has become less and less viable. As winter deepens and food gets scarce, they have to make some tough choices. How much can they sacrifice before it becomes too much?

Desperate for survival, Denny is forced to make decisions when Skate no longer can, and takes them back to Rainbow Alley, where their lives first went wrong. Hoping Rolly can help them escape the gang and the streets with their lives, and maybe some of their tattered pride, he begs for help. But going to Rolly might prove to be the one thing that their fragile relationship can't survive, not to mention that the chaos their return unleashes in the Alley and with its protectors could make them more enemies than friends.

Winter seeped through even thick denim, eventually. Skate squirmed. The pavement ground his seat bones. It hadn’t been that long ago he’d had much more padding back there. He braced his feet, wiggled his toes and aligned his spine next to the hard metal bracket bolted to the brick at his back. It dug painfully into his flesh but it was a comfortable kind of pain. It told him he was as far under the rusting iron grid-work of the fire escape as it was possible to get, and that was a good thing. Neither the cold wind nor prying eyes could reach this far into the gloom

“You okay?” A small, soft voice issued from the bundle between his legs.

“Yeah.” Giving in to his need for warmth, Skate wound both arms around said bundle and drew the quaking form tight to his chest. It was as much shelter as he could hope for, sandwiched between crumbling brick and the bony form of his companion.

His bundle squirmed until a face appeared. “It’s getting worse.” Lank, mousy brown hair flopped in front of sunken brown eyes set in the gaunt face that turned up to him. Full lips looked out of place, too plump next to all the shaded hollows of too-thin cheeks, a jutting chin and a long, narrow nose.

Mouse. At the moment, it seemed an entirely appropriate name for the tiny, skittish creature huddled in the tight space with him. Skate hauled him nearer.

“You still chilly?” he asked.

“Aren’t you?” Mouse never spoke louder than a stage whisper lately, and Skate had to lean until he felt the warmth of breath on his cheek to hear the question.

The truth was Skate had gone well beyond cold some hours ago. At least back here, fingers and toes might be numb, his ass on the concrete might be beyond feeling, but he had Mouse curled up tight to his chest and he had the illusion, with that intimate contact, that they were safe. With any luck, safe enough he could sleep. Between the constannedt wintry temperature and forever looking over their shoulders, he was exhausted. Maybe now that he’d stopped shaking, he would be able to find some rest.

“Huh?” He fought to keep his eyes open, his thoughts focused and his attention on Mouse’s grimy face. He’d asked something, but Skate couldn’t remember what.

Skate flicked his head, trying to eradicate the frigid touch snaking goosebumps down under his collar.

The pitch of Mouse’s voice had risen slightly, touching off an alarm in Skate’s gut. He pulled the smaller man closer still, peering past for the danger that had his friend on sudden alert.

“We should go to the shelter.” Mouse prised himself free of Skate’s grasp and began to back out of their tiny alcove. “C’mon.”

“No.” Skate remained firmly, heavily in place, making it impossible for the smaller man to move him.

“We should. C’mon.” Mouse tugged again, harder, jacking pain through Skate’s fingers where he squeezed the frozen digits too hard.

One name, a short form for all of the things they’d been trying to outrun for months. The shelter was where their former gang leader had found them the last time. They’d only got away because one of the brawnier volunteers had managed to distract Blade at the door just long enough for Mouse to dash to safety. Skate didn’t think about his own encounter with the gang on that faraway day. He had managed to get himself out, but not soon enough.

Blade would be doubly pissed off now that two minor, mostly helpless ex-gang members had once again slipped through his grasp. The shelters would be watched. So would the soup kitchens and charity wagons and bus stops. The abandoned buildings where vagrants crashed would be guarded by the very homeless people who squatted there. They’d tell Blade if Mouse and Skate showed to save their own frozen, filthy hides, and Skate couldn’t really blame them.

Every place they might go would be under surveillance, and Skate knew it, because back in the day, when he’d been desperate to join the Greenbacks himself, he’d been one of those doing the watching.

Now that he wanted out, he was the one being hunted. All those kids wanted was a glimpse of them. They wanted that vital scrap of information that might get them noticed by the leader. The desire to tell them how horribly wrong it would all go once they were in washed over Skate.

Of course, he wouldn’t say anything to any of them. He couldn’t. They’d have to save themselves.

“We have to go somewhere,” Mouse was insisting, still yanking on his arm.

“Here’s good.” Skate called up reserves of strength he didn’t really have to spare and hauled Mouse back in. “Not even cold anymore.” He smiled a wilted, floppy smile. “Just tired.”

“That’s what has me worried.” Mouse huddled against him, apparently giving up the attempt to get him to move. “Tell me something?”

“What?” Skate blinked into the dusky light. Knowing they were safe from prying eyes here, he wrapped his arms around Mouse and nestled his chin on his companion’s shoulder, breathing in the faint smell of Mouse clinging under the layers of street.

No use wasting the tiniest smidge of heat, he decided. Besides, despite the reek of city filth and the stale stench of other men, Skate could still detect that special tinge of open sky and hay and sweetness that he was addicted to. If he could breathe Mouse all the time, he would.

“Anything.” Mouse twisted around and cuddled his bony body to Skate’s. He never passed up an opportunity to get close. It didn’t matter how many times Skate reminded him they were just friends, he still wormed his way deeper every opening he got.

“Tell me anything,” he said, voice barely above a kitten purr. “Just talk. I love your voice.”

“Nothing to say,” Skate muttered. He was acutely aware that if anyone were around to overhear them, or see them like this, he would never get away with playing his dog-eared, bent-up straight card. Especially not with the way he let Mouse take the liberty of popping tiny kisses open along the side of his neck.

If you like psychological and emotional thrillers that expose the characters’ core, if two men who face life-and-death decisions while dealing with their emotions are your think, and if you’re looki...

Share what you thought about Face to Face and earn reward points.