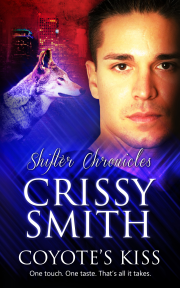 Book 4 in the Shifter Chronicles series

One touch. One taste. That’s all it takes.

The newly formed Shifter Coalition have solved murders, stopped a bombing and rescued troubled teens. Now working as a joint task force with the ATF and FBI they have the biggest hurdle ahead of them.

Luca Perez is enjoying his time with the Coalition. He feels at home with the other shifters. Being so far from his close-knit parents and siblings he’s pleased to have a replacement family. He loves the training exercises they’ve been organizing, but when the FBI joins the fray all the agents will be in a fight for their lives.

Jade Adams is a human assigned to a shifter partner. The FBI isn’t known for being accepting of the shifters, so when the chance to join the task force with the Coalition comes up she jumps at it. She’s curious to learn more about the unique people who make up the new agency.

During the first mission between the three agencies, Luca learns more about the ins and outs of the FBI and worries that the shifters there are in danger unnecessarily. With missing agents, it will take the combined strength of all of the others to make it out alive.

Luca Perez grinned behind his mask as he heard Jamie Ward curse. A billow of smoke and ash rose from the training field, making the clear blue day seem drab and dreary.

“Damn it, Perez!” Jamie’s growl could be heard across their headsets.

The big tough Coalition agent probably hadn’t expected Luca to detonate the charge with Jamie’s team still so close to the site. Luca was an expert, though, and he knew when and how to make an explosion. His years with the ATF had been productive. Not only did he specialize in undercover work, but he also knew how to make and disarm all types of bomb.

Today’s exercise was supposed to help Luca and his partner Abilene Fox, along with the Coalition teams, bond and learn to work as a team. Luca had been excited when it had finally been his turn in the four-week series of drills to show off what he could do.

“That wasn’t nice.” Abilene bumped his shoulder as she crouched next to him.

Luca laughed before glancing at her. She was trying, he knew, but her lips twitched as she attempted not to join him in amusement.

“You’re lucky it’s not Zak on that side,” she said.

She was correct. Zak Lewis wouldn’t hesitate to beat Luca’s ass. Of course then the strong tiger shifter would help him up. He’d become good friends with Zak when they’d both been undercover trying to take down a group of shifters that wanted to start a human and shifter war. Neither he nor Zak had known that the other was an agent but they’d formed a tight bond. Zak had saved his life so he would be forever grateful. Still, that wasn’t the only reason he kept his pranks away from Zak. He didn’t want Abilene to kill him.

His partner was fierce when someone she loved was in danger. She’d been seeing Zak for a month and already there was no doubt that they were in love. She spent almost every night with him, although she insisted that she and Zak didn’t live together. Abilene paid her half of the rent for the apartment Luca and she had leased while on loan to the Coalition. However, he still went home to an empty place night after night.

“You have to find me first, you big dumb bear,” Luca taunted. They had to press the button to turn on the mic to talk to each other, and by keeping Jamie busy verbally sparring with him, Luca could take advantage and really mess with the Coalition.

He just shook his head. Jamie’s team was too far away to find where he and Abilene were holed up. He’d run these kind of training missions before with the ATF, but working with the Shifter Coalition was different. When Luca was attempting to educate humans, he could afford to be a little lax on the trail he left behind when moving during the mission. With the Coalition his job was more difficult. Since every member in the teams was some sort of shifter they could use their superior senses to discover where he and Abilene were hiding.

A screech came over the mic.

Luca was prepared for that, though. Cody Johnson ran the birds of prey unit. The dark canopy over his and Abilene’s heads blended in perfectly so that even from the air they wouldn’t be seen. “Just don’t move around. We’ll be good.”

She huffed, causing him to bite back another laugh. There were four squads searching for him and his partner but Luca was certain he’d be the victor of this round. “Where’s Zak?” he asked Abilene.

“He’s coming up on the north side of the field,” Abilene answered quietly. “But they aren’t on our path.” She lowered her binoculars.

Great, now he could have some fun with the felines. “Here, kitty, kitty,” Luca goaded.

“I’m not Jamie,” Zak replied, his deep voice full of confidence. “I won’t give you a chance to run.”

Luca was having so much fun. “Keep a watch out for the felines and wolves while I watch for the bears and birds. If we have to run, remember to keep low to the ground and under cover,” he told Abilene.

“Maybe we should shift?” she suggested.

He shook his head. He’d hold off on changing forms for now. Abilene would be able to get away easily enough. Her cheetah form would make it difficult for anyone to catch her speed. As a small coyote, Luca didn’t have much chance of running away from the others. But he did have a few tricks up his sleeve. “Tell me when Zak’s group reaches section four. I have another surprise for them.”

He raised his own pair of binoculars to watch for Jamie. He should soon be reaching the curve next to the dry creek bed where Luca had placed a few smoke containers. He wouldn’t risk actually hurting anyone, but the smoke would screw with their shifters senses. Make it harder to zero in on his location.

Movement caught his eye. Jamie stepped out from between two large trees while tilting his head back. He was still in human form, but Luca could tell that he was sniffing the area. Almost…to the traps.

Jamie waved at the team behind him, and Luca could hardly hold back his glee. Five steps and Jamie stepped on the release.

Three popping sounds alerted the bears before the canisters opened, filling the area with green smoke. Luca chuckled, and Jamie darted back under cover.

“They’re almost to the fence,” Abilene whispered to him.

Grabbing the right remote, Luca prepared for the shock and awe. He needed the felines to clear the area before all hell broke loose behind them. “Tell me when,” he ordered.

As she waited, Abilene was chewing on her bottom lip. He knew she enjoyed this game just as much as he did, although Abilene was always more cautious than him. “Just about…” she murmured.

He rubbed his hand over the green button.

He hit the charge. The bang was loud and beautiful. Most people didn’t know that the ATF was also in charge of regulating fireworks since they were considered explosives. Because of his job, he’d been able to secure some large firework displays to use. The sky filled with colorful streaks as the eruption occurred.

“That was just cool,” Jamie praised over the headset. Of course he wasn’t the one closet to that detonation so Luca suspected that had a lot to do with his enjoyment.

The roar that carried across the training field was long, loud and pissed off. Zak’s tiger roar echoed and Luca had to suppress his instinct to cower down to the more dominant shifter. Luca’s job was to make this exercise as difficult as possible. He needed to keep the shifters on their toes.

It wasn’t easy making the very solid and calm Zak Lewis lose control. Luca prided himself on his accomplishment.

“I don’t think so,” Luca quipped back. But Jamie’s confidence did worry him a little. He glanced over at Abilene, and she shrugged.

“Abilene, darling,” Jamie drawled. “Why don’t you get out of there while we teach your partner a lesson?”

“How about you get back to your mission? I don’t have all night to wait for you. I do have other plans, you know,” she replied.

Luca grinned—that was his girl. She always had his back.

“Watch closely,” Luca murmured. “They’re up to something.”

Luca had lost sight of his targets, too. He squinted, hoping to pick up some sort of movement. He couldn’t let himself forget that these were trained agents he was up against.

They had either retreated or were trying to find another path to where he and Abilene were hidden. He lifted his face as he breathed deeply. He couldn’t pick up anything other than the dirty metallic scent from his explosives. While that aided him in his mission, the downside was that he couldn’t smell if anyone was approaching.

Ten minutes went by and Luca had to force himself not to fidget. It was taking too long. The teams hadn’t appeared back into view and there was complete radio silence.

Luca is enjoying his time with the Coalition, but when the FBI joins the fray, all the agents will be in a fight for their lives in this thrilling paranormal romance. Jade and Luca has some seri...

Great world building in this Shifter Chronicles series yet I have found the books also work well as stand-alones. I found that with this coalition building of combining different organizations, and d...

Share what you thought about Coyote's Kiss and earn reward points.

Three of my favorite desserts:

I have a weakness and you've found it. Desserts, oh boy oh boy, how can anyone resist.