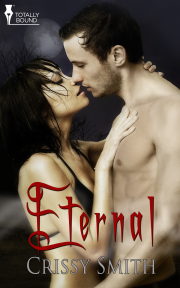 Jo Black went in search of a vampire…and finding one is going to rock her world.

Immortal Nic Lucian has finally met his bond-mate only to have her try to kill him. As he tries to introduce her to his world and reunite her with her sister who is now an immortal, he gets a lesson in modern women and how stubborn they can be.

Jo's world had been turned upside down. The death of her sister introduced her to the world of vampire hunting. Now she learns the hard way that crosses, stakes, holy water, and sunlight don't work. And you better protect your heart and body, because when an immortal wants you, he gets you - one way or another.

Jo Black pulled into the barely lit parking lot of the club . It was just shy of midnight, and she had already hit two other clubs. She was on a mission that had yet to be fulfilled. She knew she couldn’t go home until it was.

She’d spent weeks preparing for tonight—what she would wear, how she would talk, and how she’d get him to leave with her. Her whole life came down to this one night, and she had to be ready. She could not fail in this mission.

Slowly, she walked towards the front door. Her black knee-high boots crunched on the gravel, making more noise than she’d expected. She stopped and took in her surroundings. A cold shiver ran down her spine, and she felt like she was being watched. She turned in a complete circle but saw no one and nothing moved. Shaking her head, she continued to the door.

She wore a short black skirt that didn’t come anywhere near her knees and red silk shirt that was cut low and tight, teasing with the flash of flesh when she moved. Her long brown hair was left loose, falling in silky strands down past the middle of her back. She would turn heads when she walked in, as she had when she’d entered the other two clubs earlier. But she knew what she wanted and would wait for him. Only he would do.

Opening the door, she blinked several times to adjust to the low light. The music wasn’t as loud as the other clubs she’d visited but it immediately caught her attention with its low tone and soft, inviting feel. It had a jazzy feel to it. She wasn’t sure what she was listening to, but she liked it. Someone cleared their throat to her left and she realised she had been staring into the club. The woman behind the stand smiled, but it didn’t reach her eyes.

“Invitation please,” she said, holding out her hand.

Jo slid her hand down her leg to her boot and took out the black and silver invitation Roger had given her earlier that night. She handed it to the woman without saying a word. She wasn’t sure how Roger had gotten the invitation; she just hoped it worked and got her in.

The woman took her time, looking at the invitation, then at her. Nodding her head, she told Jo, “Go ahead.”

That was it. She was in.

This was one of the most exclusive clubs in town and Jo Black had just gotten through the door. A quick jolt of thrill went through her. This was it, she could feel it.

She nodded and smiled at the bouncer who stood next to the stand. She hadn’t noticed him before. He seemed to have shifted out of the shadows.

As he let her pass, she realised the club was far nicer than she expected. There were no strobe lights like there were in most clubs. This club was dark, very dark, with only a few lamps on the walls around the booths. She could see the outline of bodies sitting at tables or booths close to one another.

As she walked closer into the middle of the club, she watched the dance floor where people swayed slowly against one another. This wasn’t what she was used to. She swallowed hard, knowing that, if this was the place, she was way out of her league.

Ignoring the feeling of dread and fear that curled in her stomach, she headed to the bar. She took a seat on one of the empty bar stools and glanced around. There were only five other stools occupied, all men and all looking at her. She didn’t smile at them, didn’t bat her eyes, or give a flirty look. Roger had told her to sit. Sit and wait, and he would find her.

She had asked what to do if no one approached her, but Roger was convinced it would be less than an hour. She was afraid she wouldn’t recognise him and an innocent would get hurt, but Roger just waved that off.

“He’ll come to you, Jo. He won’t be able to resist,” Roger had told her. She wasn’t sure what that meant exactly but she had to trust that Roger knew what he was talking about. She had come this far and it was too late to back out now.

Jo jumped when the bartender suddenly appeared in front of her. The people who worked around here kept managing to surprise her as if they appeared from nowhere. Which played into everything she knew about the undead. She wondered if they did it on purpose.

He smiled, showing perfectly white, straight, even teeth, and she relaxed. “So sorry, chére, didn’t mean to give you a start. Name’s Logan and what can I get you?”

It took her a minute to put together everything he said through his thick southern accent, but once she did, it made her smile.

“Hello. May I have a glass of Chardonnay please?”

Smiling down at her, he winked. “Coming right up.”

Jo watched as he poured her drink. He was young, probably in his mid-twenties, with blond hair and blue eyes. His southern accent had been thick and sweet, and she liked him almost immediately but decided to be cautious. Roger had told her that the undead could put glamour on themselves and her, making her do their bidding. Somehow she knew deep down that Logan wasn’t one of the monsters. It was a feeling she had to trust. Most of her life, she had been able to read others well. Her sister had even joked that it was a gift. Jo shook her head to dissolve any thoughts of her sister. She couldn’t dwell on that. She had a job to do.

With Eternal, Crissy Smith has launched a new series that I'm already totally hooked on.This short story possesses all the elements of a great paranormal read...

I TRULY ENJOYED IT FROM THE START TO THE END, IT JUST WASN'T LONG ENOUGH - I HATED TO SEE IT END.

Share what you thought about Eternal and earn reward points.