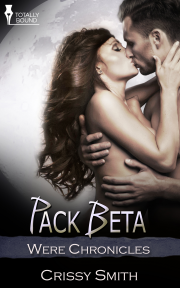 Book 11 in the Were Chronicles series

Thrown into an attempted kidnapping and a shooting, Pack Beta Chase Lawson will do anything to protect his Pack. The hunted has now become the hunter.

As Pack Beta, Chase Lawson loves his position and the time he gets to spend helping others. Always the problem-solver, Chase tries to keep the Pack running smoothly for his Alpha. A request to check on one of the older members in the heart of the Canyon leads to a man shot and bleeding on his porch—and Chase ducking for cover.

Someone is hunting Chase’s fellow members. Chase might not be the biggest or the toughest of all the shifters but he’s determined to find who is responsible for the crime.

The last twelve hours have had Kayla Webb running from an attempted kidnapping. She returns to Canyon, Texas after her father is shot. At the hospital, Kayla and friends walk into a mystery—a secret her father’s kept from her and the entire Pack—and it has come back to haunt them all.

Unsure who to trust, Kayla teams up with Chase to track down the man who hurt her family.

The logical, by-the-book Beta and independent, strong-willed female will save everyone but the secrets revealed will send a shock wave through the plains of Texas.

Kayla Webb raced past another alleyway without slowing down. She could hear her best friend Randy at her heels breathing heavily and fighting to stay with her.

She wasn’t sure how they’d ended up running for their lives through the deserted streets of Lubbock, Texas. All she was certain of was that they had to get away.

Ahead she saw what she was looking for. Slowing only slightly, she motioned Randy to the right. Together they made the turn, bringing them to the opening of an old, abandoned building. Kayla slipped through the small gap first before reaching out to grab Randy’s hand.

Her friend clutched her as they collapsed on the cold, dirty concrete floor.

“Do you think we lost them?” Randy managed, panting.

Kayla held up her right hand to have Randy quieten down as she strained to pick up any sound of their pursuers. Taking a chance, she peeked around the opening to look out into the night. “I think so,” she whispered.

Wiping the sweat from her face as she leaned her head back, Kayla tried to calm her breathing. She wouldn’t have thought she was so out of shape but a chase for over a dozen blocks had her feeling sick. Plus she wasn’t sure she could stand if need be. Her legs shook, as well as her muscles cramped

“What the hell was that all about?” Randy asked as he twisted to try to look out into the alley.

“I don’t know, but they sure know who we are,” she said. “That wasn’t a random mugging. Did you see how they immediately zeroed in on the two of us? How they expected us to run?”

Leaving a restaurant together, Kayla and Randy had been headed to her truck when three men stepped out of the shadows and advanced on them.

Her wolf had sensed the threat, making it difficult to stop from shifting. She managed to hold her wolf back and grabbed Randy’s arm, pulling him to a stop. They had been too far from her vehicle. She would have chanced a sprint across the parking lot until she had spotted movement in that direction too.

Three more men blocked her and Randy from their escape. They’d had no choice but to run—and run fast.

If she could call an old building that was about to collapse safe. She’d attended a party—an illegal party—there almost ten years ago. The structure hadn’t been stable then. It was in even worse shape now.

“We can’t go back to the restaurant.”

Randy had a point.

“I have a friend who lives a couple blocks from here.”

“We’re in the middle of an industrial zone,” Randy argued.

“He’s a metal artist,” she explained. “He converted one of these old warehouses into a studio with a loft. If we can get to him, we can at least think about our next move.”

Standing, she reached down to help Randy to his feet. “Is your leg okay?”

He shrugged. Damn, she hoped he could make it as far as Justin’s place. She would carry him if she had to, but that would slow them way down.

She wanted to hug him, promising that everything was going to be all right, but she couldn’t. Also, just because Randy had an old injury and limped a little didn’t mean he would put up with her coddling him.

Stepping through the opening, she paused long enough to insure no one was around. She picked up on the scents of trash, rotted food and vomit. Those were the only smells, though. No humans around.

This installment in the Were Chronicles is an exciting read, but I wish that I could have a bit more background on the characters and their pack. Chase and Kayla's characters are wonderfully in tune with...

Share what you thought about Pack Beta and earn reward points.

Hi everyone! You can’t see but I am sending you great big kisses and waving with two hands! I am so pleased to be able to introduce myself and my books as part of this great community. As part of Totally Bound publishing I have over thirty books and publications that I can’t wait for you to try.