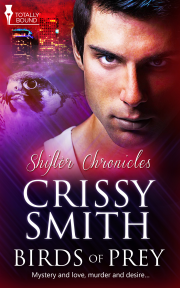 Book 1 in the Shifter Chronicles series

The call came at five in the morning.

Cody fumbled on the nightstand beside his bed and knocked something onto the ground as he reached for his cell phone. “Hello?”

“Yes, sir?” Cody replied with a wince. It was Sunday and his day off. He’d gone out the night before with Zak and Jamie and had only climbed into bed three hours ago. Sadly, he’d crawled into bed alone but with too much alcohol in his system. If he was being called in, a hangover was not going to help.

“I need you and your team to report to a scene,” his boss told him.

Cody sat up and rubbed his hand roughly over his face. “Okay.” It wasn’t normal procedure to call in one of the teams that wasn’t on the schedule. His superior had also never phoned him personally before.

“I’ll text you the address,” Commander Green said, lowering his voice. “It’s going to be a long day.”

“Understood, sir,” Cody replied, before his boss disconnected the call. Even if he didn’t understand yet, he wasn’t going to argue with his employer.

He only had to wait a few seconds for the address to be sent to his phone. And that was all he got.

No names or information on what he and his team would be walking into. Not normal at all.

He forwarded the text with the addition to report ASAP to his unit.

Swinging his legs over the edge of the bed, he couldn’t hold back a groan. He should have known better than try to match shots with Jamie, but the bear shifter had kept pushing.

Zak had just laughed at them as they threw back round after round.

It wasn’t the first time he’d made the mistake of trying to take his buddy on and it probably wouldn’t be the last.

Cody needed coffee. Strong and black, and a lot of it.

He walked to his closet and pulled out a clean pair of jeans and a black T-shirt. He tossed them on the bed as he crossed to his dresser. He yanked out a pair of boxers and socks. His boots were still right next to the bed where he’d kicked them off earlier.

Dressing quickly in what he considered his daily uniform—jeans, shirt and boots—he was once again glad that he was part of a field team and rarely had to put on a suit. He preferred to be comfortable when he worked.

Picking up his cell again, he noted that all three members of his crew had replied affirmatively, just as he had expected.

He strolled out of the bedroom and down the hall of his two-bedroom, one-bath apartment. He didn’t bother turning on any lights until he reached the kitchen.

There, he flipped on the switch above the sink to light up the room then pulled his travel cup from the cabinet above his single-serve coffeemaker.

He put in the strongest blend and started up the machine. Sixty seconds later, the aroma of the strong brew almost caused him to weep in relief.

Once his coffee was finished, he placed the lid on tightly and headed out. He grabbed his badge, wallet and keys from the side table by the front entrance just before he unlocked and opened the door.

Outside, it was already reaching the high eighties and he knew it would only get hotter as the day wore on. It wasn’t even light yet, and the dry air was already stifling.

Didn’t matter, he mused. Something had happened and he suspected that it wouldn’t be just a long day, but a long few days.

He climbed into his old Jeep and started it up. The air conditioner blasted on, sending warm air into his face. He cursed and wrenched the knob to low.

Before he backed out of his parking place, he typed the address into his phone’s GPS and waited. Once the GPS announced the route he should take, he shifted into reverse and drove to work.

It took him twenty minutes to reach Lake Shore Drive. The street was located in the classy part of town. Old money. Big money. No wonder Commander Green had called him in personally.

This was going to be high profile.

Damn, that meant media and gawkers.

And since it was his unit that had been assigned, a bird shifter would be involved in some way.

He turned onto the quiet street, admiring the large houses. This neighborhood was made up of two and three-story structures that spread onto perfectly manicured plots. Even though he’d grown up in Lake Worth, he had never spent a lot of time in this area of the city.

Two blocks down the street, he finally saw the lights from police cars. His GPS announced that he was coming up on his destination. He reached over and turned the program off.

Roadblocks had already been placed limiting access, so Cody had to pull off to the side. He exited his vehicle and made sure that his badge hung in view from around his neck.

City cops roamed about or stood in small groups as Cody stepped around the barricades. He narrowed his gaze as he took in the scene.

Plainclothes detectives were speaking with his boss. He headed over there first.

Yellow crime tape roped off the smoldering SUV, preventing anyone from gaining access.

“Here he is now.” Commander Green waved him forward.

Cody shook each of the detectives’ hands. Their grips were firm but not aggressive.

“Agent Johnson, it seems this scene will be turned over to you,” Detective Sanchez said. He was obviously unhappy with that decision, if his scowl was anything to go by.

This fast paced and smooth flowing plot keeps the reader on the edge...

Share what you thought about Birds of Prey and earn reward points.