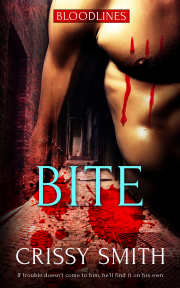 Book 1 in the Bloodlines series

If trouble doesn’t come to him, he’ll find it on his own.

Dangerous, scary, crazy… Kieran Smith has been called a lot of things in his time and most of them are true. He respects few, trusts even fewer and barely tolerates everyone else. When Kieran is sent on an unwanted vacation to the city of Las Vegas, he goes looking for trouble just to prove a point. Little does he know that one night is going to set in motion a chain of events that will change his entire life.

Dakota Reese is a third-generation Organization agent. When she meets Kieran, the first Day Walker she’s encountered, she is both intrigued and excited. She even finds his snark and sarcasm sexy. When she has the opportunity to get to know him better, it’s obvious that Kieran has been tormented by shifters in his past. As much as she wants him, Dakota isn’t sure that Kieran can see past the fact that she’s a jaguar shifter.

As Kieran finds himself falling for the sweet yet tough shifter, a ghost from his past comes back to haunt him. His boss is up to something as well and his partner is keeping secrets. He might be on vacation but Kieran isn’t getting any rest.

With suspicion and tensions running high, Kieran must figure out who he can trust before he really does go crazy.

Away from the bright lights of the Las Vegas strip, Kieran Smith walked down the dark and litter-ridden street in the roughest part of town. Most tourists didn’t see this side of the city but Kieran wasn’t like other tourists. He knew he should be in his hotel room steaming in a hot shower or down in the casino spending some of his hard-earned money, but instead he’d strolled for a few hours until he’d found himself far away from the crowds.

Even though the city was well known for sin, there were still different types of vices. The people who had darker and exclusive ones wouldn’t be found in the middle of crowds wearing Bermuda shorts with long socks and wielding cameras. No, Kieran had to search out what most people hid from.

He wasn’t opposed to sin, necessarily. True he’d spent most of his life protecting those who didn’t even know he or his organization existed. But Kieran truly believed that some sins weren’t so bad. He strongly believed there were different levels of bad because where was the fun in living if you couldn’t enjoy some vices? If he was completely honest with himself, Kieran could admit that he’d left the sanctuary of the safer part of town and was looking for trouble, or more accurately, looking to stop trouble.

He was bored and hadn’t seen enough action in the past few weeks. Not since he’d been put on leave along with his partners after an intense case they’d closed with a pack of wolf shifters. Some discreet questioning to the hotel staff where he was staying and Kieran had found where most of the shifters hung around, the ones who caused problems to be more specific. Kieran figured that if any other supernatural types were around, and why wouldn’t they be, they’d stay in the same area.

Although he wasn’t picky about who or what he captured, his first choice was always shifters. Other than Remy, who’d been one of his work partners for the last several years, Kieran hated all shifters.

If possible, he’d wipe every single one of them off the face of the earth. Unfortunately, as part of the Organization, his job was to protect innocents. It didn’t matter if they were human, shifter or like him. Unless they’d committed a crime, they were off limits to him. He really hated that rule.

Kieran had gone through hell when a pack of shifters had captured him after seeing him feed. They’d tortured, experimented on and almost killed him as they’d imprisoned him for over ten years. If it weren’t for the Organization getting wind of the lab that had become the only home he could remember, and rescuing him, Kieran knew he wouldn’t have made it much longer. Rescue had come but without anywhere to go, he’d been taken in by the people who’d saved him. Although Kieran didn’t have the bloodline, like those who were normally chosen to serve as one of the Organization’s agents, he’d volunteered to join anyway.

Caspar, the only man who Kieran had trusted for a long time, had put him through training until Kieran had been ready to join the ranks. That was when he’d become partners with Angel, another Day Walker like him, and Remy, the wolf shifter who’d became his best friend. His life had changed due to the Organization, even if everyone other than his boss and two partners thought him crazy. Because of course, he was.

Not only was he a Day Walker that drank blood and fought evil on a daily basis but Kieran was also afraid of the dark, doctors and anything he couldn’t control.

All in all, Kieran didn’t mind being the psycho of the good guys. He was the monster that parents used in stories to scare their kids into behaving. Only he was very real.

If he hadn’t become one of the good guys, there was no telling what he’d have done. So it was a good thing that Caspar had decided he was worth keeping around. Because Kieran would make a really good bad guy, and he knew it.

There were times like tonight when Kieran knew he was standing on the edge between doing the right thing and letting the darkness inside him finally come out. He was barely hanging on to the little sanity he had so he’d gone out hunting for trouble even though he was supposed to be on vacation.

However, after two hours of stalking the streets, Kieran hadn’t run into any trouble or even seen another supernatural creature. A few humans were scattered around—most appeared homeless and down on their luck, but there was nothing that required his talents.

Resigned to another night of hanging around the smoky casino floor instead of having any fun, Kieran took the next left at the corner and headed back toward his temporary home. Could a hotel be considered a home? He guessed it didn’t really matter. Kieran didn’t especially want to be anywhere, so this was as good a place as any. His boss had suggested Las Vegas as one of his vacation spots, thinking that Kieran wouldn’t stand out as much here as he normally did. Not that it was Kieran’s fault. If they’d wanted him to behave, they shouldn’t have sent him on vacation. He didn’t care if his partners needed time off. Kieran was lost when he didn’t have a purpose.

A scream pierced the quiet night and Kieran froze. He concentrated on the sound to narrow down where it had come from. The empty streets and alleys could cause noise to echo. But Kieran was good at what he did. He took off, using his super-speed to close the distance between him and whoever needed his help. He skidded around an old brick building, which led him into a dark alley. With his excellent night vision, Kieran didn’t have any trouble spotting the young couple, a male and female, backed into a wall while three hulking figures closed in on them.

The female screamed again while the attackers laughed at her.

“Hey.” Kieran barely raised his voice. If these guys were supernatural, he wouldn’t need to. Just as he’d expected, they turned toward him while still keeping their prey in their sights. “Having a party?” Kieran asked with his friendliest tone.

Share what you thought about Bite and earn reward points.