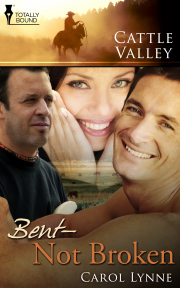 Book 13 in the Cattle Valley series

After the tragedy at Cattle Valley Days, Carol McGowan woke in the hospital to find George Manning hovering over her. George confessed he'd fallen in love with her, but Carol is skeptical. She knows George is bi-sexual and has been in an ongoing secret affair for years. She's been down that road before and ended up on the wrong side of lonely. Carol learned from her previous relationship and isn't in any hurry to jump back into another ménage.

George Manning has spent the last nineteen years hiding his love for his closeted friend and country music legend, Trick Allen. After almost losing Carol, George decides to grab hold of the love in front of him, instead of the dream he's always chased.

Trick Allen spent years building his career. With the reputation of being a typical love 'em and leave 'em superstar, Trick hid his love for George from the rest of the world. When presented with the choice of losing George forever, or stepping out of the glittered closet he'd become accustomed to, he is faced with the ultimate decision. Is a real life worth risking his career?

Three people, with very strong personalities, try to blend love and home amidst a national outcry of vehemence.

Carol opened her eyes to the sight of George Manning’s gorgeous face asleep beside her. How many times had she dreamt of waking with George? The beeping of the heart monitor on the opposite side of the bed brought her back to reality.

She remembered waking several days earlier to see George’s face hovering over her bed, his hazel eyes filled with concern. What had prompted such emotion in the man? Although they’d spent a great deal of time together in the previous months, George hadn’t even made a pass at her, much to her disappointment.

She lifted her hand and ran her fingers through his short, dark brown hair. George’s eyes fluttered several times before opening.

“Hey,” Carol said. Even though it had been several days since her surgery, there was still a slight rasp to it.

Despite being awake, George continued to allow Carol’s fingers to stroke and pet.

“Probably more rested than you. Why don’t you go home and get some sleep.”

George shook his head but not enough to dislodge Carol’s hand. “I’m okay. At least I’m in here with you. Mario slept in the lobby for two days.”

“Have you gone home at all?” she asked as she traced one of his eyebrows with a fingertip. Although Sheridan was only forty-five minutes from home, Carol knew the man hadn’t spent one night in his own bed since the accident.

“I’ve been running back to Cattle Valley every day to shower and change. I don’t know that they’d let me stay with you if I smell.”

Carol started to laugh and grabbed her stomach.

“Should I get the nurse?” George rose to his feet and offered her a drink of water

Carol shook her head and sipped at the water. “Just don’t make me laugh anymore.”

George took Carol’s hand in his and leant down to place a kiss on her forehead. “I’m sorry.”

Carol grinned. “Don’t be silly. You didn’t do anything on purpose.”

She stared into his eyes. There was so much she wanted to ask him. His actions since the collapse confused her. “Aren’t you supposed to be at the fire station?”

George’s Adam’s apple bobbed several times before he answered. “I don’t want to be anywhere but with you.”

Narrowing her eyes, she reached for George’s hand. “What’s going on?”

George resumed his seat and rested his cheek on their entwined hands. “I’m in love with you.”

Shocked, Carol gasped. “What? You can’t be.”

Leaning his arms on the bed, George leant towards her. “I can’t begin to tell you how many times I’ve wanted to kiss you. To just take you to my bed and keep you there, but certain things always stopped me.”

George lowered his gaze. “Yeah, like Trick. It wasn’t until the collapse that I realised I was wasting my time with him.”

Carol shook her head. She could see the mixed emotions in George’s eyes. “You’ve been with him a long time.”

“Nineteen years, too damn long to be shoved into the role of secret lover. I’m tired of that. I want a real life, with a real partner.”

With her head swimming, Carol released George’s hand. She may have only had one serious relationship in her life, but it had ended with her being alone. It had been years since she’d moved to Cattle Valley with Rodney and Lyle. At the time, she’d thought they would finally be able to openly be a family. That had all changed when her men decided they made a better twosome. Rodney and Lyle had taken off to Seattle without a backward glance.

No. She couldn’t travel down that road again. She shook her head. “You still love him. I can’t…”

George stopped her with a soft kiss. Their lips lingered in the chaste kiss until he eventually pulled back. “Give me a chance.”

Her immediate reaction was to tell him thanks, but no thanks, but her heart stopped her. How many times had Quade teased her about staying in Cattle Valley? In a town where most of the men were either gay or bi. She seemed to be tempting fate. Carol countered that she wasn’t, she was ensuring she never fell in love again.

With the feel of George’s kiss still fresh in her mind, she wondered whether she could ever again trust a man with her heart. Trick was the wildcard. Although she’d met the handsome man, she’d never thought of him as anything other than George’s lover.

“What about Trick?” she asked again.

“Give me some time to think about it.” She wouldn’t tell George, but what she really wanted was to see if things were really over with the country music singer.

After everything she’d been through, Carol knew her heart couldn’t take another betrayal. She had no doubt George would do everything in his power to keep his word regarding Trick, but the heart didn’t always agree with the mind.

“I’m not, but I learned the hard way that what someone says and what they do aren’t always the same.”

“Of course. You’re my dearest friend next to Quade. How could I do without you?”

“Hey. I thought I was your dearest friend.” Nate said as he stepped into the room.

Even feeling like shit, Carol felt well enough to give Nate a hard time. “Biggest pain in my ass, you mean,” she said in her typical dry tone.

Nate grinned and bent to give her a kiss on the forehead. “You must be feeling better.”

Carol gave Nate a mock growl. “Why’re you so chipper? Are you that happy to see me flat on my back?”

Chuckling, George stood and gave Carol another brief kiss. “I’m gonna run home and shower. Okay if I come back?”

“Only if you bring me some tacos. I may be in here, but I haven’t forgotten what day it is.”

George shook his head. “I don’t think you’re up to Jay’s spicy taco meat yet. But as soon as they spring you from this place, it’s a date.”

Carol felt the blush creeping up her cheeks. “You’ve got yourself a deal.”

Like her previous Cattle Valley stories, Carol Lynne's Bent, Not Broken doesn't disappoint. Strong and intriguing characters reveal a tale of self discovery and life changing priorities. This simple...

With each novel Ms. Lynne writes her storytelling skills grow. Her characters are always so well developed and touch me in ways that keep me coming back for more...I didn't want to leave Cattle Valley...

Share what you thought about Bent, Not Broken and earn reward points.