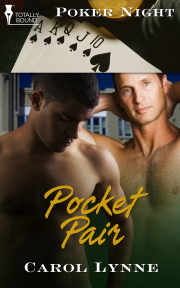 Book 3 in the Poker Night series

For three years, Trey Huggins has watched and wanted Principal Cole Harding. As a teacher in the high school where they both work, Trey knows it'll never happen. Even if Cole was gay, he'd never go for a guy like Trey.

Seeking love in other places, Trey meets a man online and finally agrees to a drink. What he gets instead is a trip to the emergency room in the back of an ambulance. With the school year swiftly approaching, Trey fights to overcome his physical limitations as well as his constant fear.

For twenty-five years, Cole has managed to keep his private life separate from his job. Extending a helping hand to a colleague shouldn't be a big deal, but the feelings Trey invokes in Cole are anything but professional.

Can the teacher tutor the principal in love, or will class be out for these two before the school year even begins?

Trey Huggins gazed out over the water and sighed. He’d been with Bobby and Jules for a month, but he needed to go home. His friends told him he should stay at least until his attacker was arrested, but Trey was beginning to think that would never happen.

How could he have been so stupid as to agree to meet someone in his home he didn’t know? Trey knew the answer immediately. He was lonely. Lonely, pathetic people like himself did all kinds of foolish things in the name of companionship.

JB101 seemed so nice when he’d met him online. It wasn’t until he’d had a knife held to his throat that Trey had an inkling of JB101’s true intentions. And now the man who’d fooled him, raped and stabbed him, was walking around on the streets of San Francisco.

According to the police, JB101 used one of the public libraries to set up his targets. The madman who changed IDs with every victim had already raped and stabbed four men, three of whom had died from their injuries, before setting his sights on Trey.

“Here you are,” Bobby said as he walked out onto the deck overlooking the Pacific Ocean.

Trey didn’t take his eyes off the view. “Yep. Where else would I be.”

Bobby sprawled out on the lounge chair next to Trey’s. “You’re planning to come with me to Zac’s later, right?”

Bobby reached over and tried to put a hand on Trey’s arm, but Trey moved before he could be touched. “It’s not about playing poker. It’s about spending an evening with friends.”

Trey leaned his head back against the lounger and closed his eyes. He didn’t want his friends to think he was mad at them, but sitting around a table laughing and joking wasn’t something he had in him just then. “It still hurts to sit upright for more than a few minutes at a stretch.”

“Would you be mad if I had the game over here? Then you could drop in when you felt like it, and still lie down if you need to.”

When Bobby took that tone, Trey knew he wasn’t going to be able to get out of it. “It’s your house. I just don’t want you changing your routine because of me.”

Bobby ran his hands through his hair. “You’ve refused to see any of the guys since the hospital. It’s getting harder and harder to put ’em off. They just love you, man, and they want to see for themselves that you’re healing.”

Trey knew his friends loved him. Heck, what would he do without them? But the shame he felt over what he’d allowed to happen was too much. “I just can’t stand the thought of anyone pulling the ‘What were you thinking?’ thing on me. I’ve had enough of that from the police.”

“And you honestly think any of us would pull that shit on you?”

Trey didn’t say anything, because truth was, yeah, he definitely believed a few of them thought it. Whether they actually came out and said it was a fifty-fifty proposition.

With his lower lip stuck out just enough for Trey to know he’d hurt his feelings, Bobby started to get up.

“Wait.” Trey reached out, but fell short of actually touching his friend. “Have the guys over. I’ll try.”

Bobby stared at him for several moments before nodding and retreating to the house.

Trey covered his eyes with his arm. The thing he couldn’t seem to explain to Bobby was that it wasn’t the rape that held him back. It was the shame that he’d been so desperate for someone to love him that he’d been willing to do almost anything.

The things he’d done via a web cam for JB101 made him blush just thinking about it. What would happen if his friends found out? He felt guilty enough that he hadn’t told the police about them. At the time they only asked him if he’d had online correspondence with the rapist.

Trey heard the sliding glass door open. “The guys will be here at seven.”

“Will Jules be home?” he asked. He liked Jules a lot. He never asked him questions about how he was feeling emotionally. Jules was concerned with his physical well-being, but he was smart enough to know not to pry into the emotional side of his recovery.

“Yeah. He should be home any minute. Why? Do you need something?” Bobby asked.

Pocket Pair is the third book in the Poker Night series by Carol Lynne. While it could probably stand on its own I recommend reading the previous books in the series to fully grasp the storyline...As...

This is a series that is sure to make its way to many keeper shelves. The stories flow easily into the next; therefore, it is necessary to read them in order...Pocket Pair has become my favorite and...

Share what you thought about Pocket Pair and earn reward points.