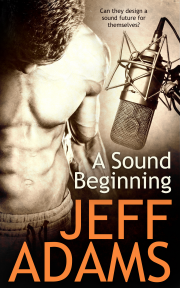 Voice-over artist Harry Moore is falling for his contractor. Can he win Diego’s heart and be his client at the same time?

Harry Moore has decided to take his voice-over business to the next level by hiring contractor Diego Ramos to renovate his San Francisco loft into a state-of-the-art home office and recording studio.

They hit it off immediately and Harry is soon hoping to make their business relationship a little more personal, but Diego has responsibilities to consider before he can date anyone, especially a client.

Can Harry and Diego design a sound future for themselves?

The intercom on the wall chimed.

“Oh well, so much for getting this done before they showed up,” Harry said to himself. He slowly got up from his seated position on the floor in front of a cabinet he was emptying. He’d hoped to get everything in the office packed up before now, but he’d been procrastinating. He crossed the room to the intercom, which buzzed again before he could reach it.

“Hello?” he asked into the grill.

“Come on up,” Harry said. He pushed the button letting them in downstairs, where they’d take the elevator right up to his sixth-floor loft. He pushed a second button for the one-time elevator unlock.

He grabbed his lukewarm mug of coffee off the kitchen counter and went to the foyer to meet them. Just as Harry arrived, the elevator doors opened and three people stepped out.

“Good to see you again, Mr. Moore,” Diego said, meeting Harry’s hand for a shake. “This is Manny and Sara. They’ll be working with me most days here.”

“Please, please call me Harry. I didn’t expect you to be doing the work yourself. That’s a pleasant surprise.”

Jeff has written stories since he was in middle school and became a gay romance writer in 2009 when his first short stories were published. Since then he’s written several more short stories and novels, including some in the young adult genre, and he plans to keep writing as long as wonderful readers keeping picking up his books.

Jeff lives in rural Northern California with his husband of twenty years, Will. Some of his favorite things include the musical Rent, the Detroit Red Wings and Pittsburgh Penguins hockey teams, and the reality TV competition So You Think You Can Dance. If forced to pick his favorite book it would be a tie between Michael Chabon’s The Amazing Adventures of Kavalier & Clay and David Levithan’s Every Day.

This is a very nice short story and I really enjoyed reading it. It was well written and I’ll be looking for this author’s work again... The relationship growing between them is great and I lov...

The pacing was great, and everything moved along and evolved at a natural rate. I definitely was right there with the guys as they move from acquaintances into more.

Really, it was a great little...

Share what you thought about A Sound Beginning and earn reward points.