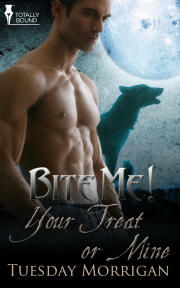 Your Treat or Mine

When security guards Riley and Vittorio find Amelia slinking across the cemetery searching for the Wolf's Cock and the Tiger's Phallus, the two weres decide to give the voluptuous beauty just what she's asking for.

Amelia Brockman is determined to climb JAK, Inc.'s ladder, and is willing to do whatever it takes to achieve her goals. But JAK is not like any other corporation. It is owned and managed by paranormals. Being fully human, Amelia has one strike against her, so when she finds out about a secret society of executives that determines who moves forward and who doesn't, she wants in. Even if it means getting hazed on Halloween.

Riley Christiansen, a werewolf, is a descendent of the Vikings and future heir to one of JAK's vice-president jobs. But at the moment he's earning his way, going to grad school during the day, and working the graveyard shift at the company's burial ground.

Vittorio Bonacelli, a were-tiger, is a descendent of one JAK's founding fathers and like Riley, he is determined to work his way up the ranks to take his rightful place as one JAK's leaders.

When the two guards stumble across Amelia slinking around the burial, looking for something called the wolf's cock and the tiger's phallus, they decide to make sure the sultry beauty isn't carrying anything.

Tuesday Morrigan began her love affair with romance at an early age. As a child she was always infatuated with the novels she snuck from her mother. Later, in high school, the public library became her sanctuary with an endless array of romance novels. Tuesday is still an avid reader of books. Thanks to shows like Buffy, Angel, and her latest infatuation, Supernatural, Tuesday prefers her stories to have a little more grit. Her favourite genres have always been fantasy, mystery, romance and erotica, so as a writer, she tries to blend the genres to create her own personal niche.

This story is sensual, humorous, and fun, and if you don't think those three elements go together, then you need to read this story!...If you like fun and inventive stories, you do not want to...

This is the stuff kinky fantasies are made of, complete with two hunks in uniform, handcuffs and a woman that's more than ready to take it all to the next level. With Tuesday Morrigan penning...

Share what you thought about Your Treat or Mine and earn reward points.