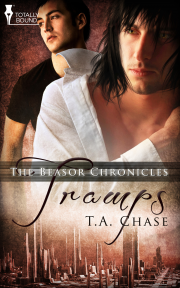 Book 2 in the The Beasor Chronicles series

Searching for a Thief accused of stealing something precious, Chal acknowledges it's the Thief that he wants and is unwilling to give him up.

Being a Tramp on Beasor means Chal spends most of his time transporting items from other universes for his clients. Since Tramps are unaffected by the draining symptoms of flashing, they are perfect for retrieval missions as well. He's watched two of his friends fall in love, and longs to find his own lover.

When he accepts a mission to flash to Earth, and retrieve a Thief who has stolen something important, Chal had no way of knowing his target might steal his heart as well.

Palmer wants to be left alone. He's been used by the man who was supposed to be his friend, and forced to do things he didn't want to do. When he flashes to Earth, Palmer hopes he can remain hidden and safe. Yet the moment a Tramp walks into the diner Palmer works at, he knows his life has taken a radical turn.

For better or worse, the Tramp and the Thief have to find out where the truth lies in the tangle of lies they've been given.

The noise of the pub hit Chal as he pushed open the door. He grinned and waved as Reagan, the head bouncer, nodded towards the back of the pub. It had been a long two weeks and he wanted to drink himself into a stupor before he went home to sleep. "Hey, there." A voice rang over the noise from the customers. Chal looked around, and spied Alden, the owner of the pub and one of Chal's closest friends, motioning to him from the table in the corner. He gestured to the bar, and Alden nodded. By the time he got to the counter, Greta had a mug of ale waiting for him. "Greta, you're a gem." He saluted her with his glass before drinking the ale without stopping. He set the empty mug back on the counter. "Fill 'er up again." "A long week?" she asked whilst getting him another ale. "Yes, and after a couple more of these I'm heading home to sleep for three days or so." He snatched his glass up and turned to head over to where Alden sat. "You're finally back." Percy, Alden's lover, stood and hugged him. Wrapping his arm around Percy's waist, he gave him a tight squeeze before winking at Alden. "You're a lucky bastard, Alden." He let go of Percy to shake Alden's hand. Alden laughed. "I know. We missed seeing your ugly face around here." Chal dropped into a chair and set his mug down. He scrubbed his hands over his head. "Man, I've been running around like crazy, trying to find this object my client wanted. I had to flash to three different universes and four different worlds before I found what I was looking for. I'm beat." "Was it worth it at least?" Percy spoke up from where he sat next to Alden. "Oh, hell yes." Chal laughed. "I charged him through the nose for all those trips. It might not drain me of power to travel through the universes, but he's one of those Beasors who thinks what I do is something like magic." "You're such a jerk." Percy reached over and poked Chal in the chest. "I can't believe you took advantage of that man." "Hey, I never said I was a saint. I have to make a living. Some of us don't have a wealthy business owner as a boyfriend to treat us like a prince," he teased the Gypsy. "Where is this wealthy boyfriend you're talking about?" Percy made a production of looking around the crowd. Alden grabbed Percy and yanked him over onto his lap. Chal watched the couple kiss for a few minutes before he grabbed a napkin and scrunched it up, throwing it at them. He laughed when it bounced off Percy's head. "What the hell?" Percy glared at him. "Ah, pretty boy, don't worry about it. It was clean, and I didn't come here to watch the two of you make out. Not that it isn't the hottest thing I've seen in a long time. Do you think you could refrain from kissing while I'm here?" Percy pouted for a second, then he nodded. "I guess we could. It's not like we won't be going upstairs in an hour or so and making love all night long." Chal groaned as his cock hardened at the thought of Percy and Alden in the midst of making love. He whistled for a waitress to bring him another mug. She dropped it off and he took a sip. "You're being deliberately cruel, aren't you?" Chal whined. "I haven't had sex in like a month or so." "Why?" Alden nuzzled Percy's neck. "I've been busy and just haven't found the time." Percy snorted while Alden shot Chal a sceptical glance. Chal laughed after he took another drink. "All right. I could have found the time, if I'd met anyone interesting enough for me to make an effort. There just hasn't been anyone around who's caught my eye." He paused. "Well, except for Steril, though even I know there's nothing but trouble with him." Alden nodded while Percy gasped. "Steril is a wonderful person. You shouldn't say things like that about him." Percy glared at Alden when his lover poked him in the side. "Hey, Steril's not here to defend himself, so I have to do it for him." "I have to say, Chal, I understand what you mean. It seems to me Gypsies and Thieves are some of the highest-maintenance Beasors in the universes." Alden winked at Chal before Percy punched him in the arm. Chal shook his head. "Well, you know these pretty boys. They need us to grovel at their feet and tell them how much we love them." Chal finished the rest of his ale and stood. He smiled at his friends. "I'm heading home to sleep for like, three days, or something like that." "I thought travelling between the universes didn't tire you out?" Alden questioned. Yawning, Chal shrugged. "It normally doesn't, but doing it constantly without really resting for two weeks or so can wear any Tramp out." "Got it. Well, why don't you call us when you wake up, and we'll meet up for dinner or something?" Alden stood and slapped Chal on the shoulder. "Sounds good to me." He leant down and kissed Percy on the cheek. "You're looking good, Percy. I'll talk to you later." He waved at Reagan as he strolled out of the pub. After grabbing a hover sled, he slid into the back, swiped his credit card to pay, and punched in his address. He leant back against the cushions, closing his eyes. The idea of falling into his bed and pulling the blankets up over his head filled his mind. He really needed some sleep. Then he would see about finding a new job.
Buy Now

I will recommend this to those who love discovering new worlds and universes, great characters, brilliant storylines, hot men and even hotter sex and a very happy ending.    ...

In this enjoyable episode, the plot is more of a romantic suspense...The story ends leaving just enough missing information to arouse the reader's hunger for the next installment hopefully coming...

Share what you thought about Tramps and earn reward points.

Other books in the The Beasor Chronicles seriesView Series Page