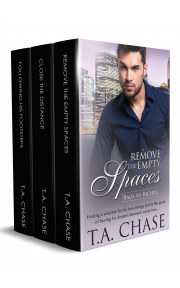 Rags to Riches series: Part One

Finding a solution for his boss brings Ion to the point of having his deepest fantasies come true.

Being a mailroom clerk is a stepping stone for Ion Vasile. He doesn’t plan on working in the basement at Bellamy International forever. Ion spends a lot of his time fantasizing about Adrien Bellamy, CEO and President of the company. He’s sure Adrien doesn’t know he exists.

Adrien Bellamy does know Ion exists. Even with all his money and power, Adrien isn’t sure Ion would want to go out with him. So he keeps his distance from the gorgeous mail clerk.

After Ion finds a solution to a troubling acquisition, Adrien takes a chance and asks him out. Their attraction runs red-hot, and a serious relationship becomes a possibility. But first they have to deal with their families and the differences pointed out between them. Adrien must find a way to convince Ion his lack of money and name doesn’t mean anything because Adrien loves him no matter what.

Being in love isn’t always roses and sunshine.

Ion Vasile and Adrien Bellamy start dating and fall in love quickly. As their relationship grows stronger, Ion discovers the fragility of his family ties. As his mother turns against him and his brother seems to be supporting her, Ion begins to lean more and more on Adrien.

Adrien wants nothing more than to be strong for Ion and share his own family with him. Yet he’s afraid they’re moving too fast. He doesn’t want to scare the most marvellous man he’s ever met away.

When tragedy strikes, they both realise life is too short to let fear rule their choices.

Being just like his father is what scares Winston the most.

Winston Tennant came to New York to work. After burying himself in his job for the several years, he’s afraid he’s becoming like his father. Cold and indifferent, Winston’s father only wanted his son as a way to continue the family line. When Winston came out, he was disowned. His best friends do their best to keep him from his father’s fate. And when Winston meets Patrick Gaverson, he thinks he just might have found the man who can take his mind off his work.

Patrick Gaverson never imagined that Winston Tennant, head of the London office of Bellamy International, would be interested in a mere personal assistant like him. Yet after a not so subtle set-up by his boss and his best friend, Patrick finds himself on a date with Winston. He discovers that Winston is a lot more down to earth than Patrick thought.

Falling in love so quickly shouldn’t be easy, but Patrick’s willing to take a chance that it will last more than a week.

“I want you all to fucking think of a fucking solution.”

It was going to be one of those days, Ion thought, as he pushed his mail cart off the elevator onto the executive floor.

“Why the fuck do I pay you bastards such fucking ridiculous salaries if you can’t come up with one fucking good idea?”

“You have no idea. Bellamy’s been like this all morning.”

Adrien Bellamy was the CEO and President of Bellamy International, a multi-national company that acquired failing businesses and tried to make them successful again. Well, it was just one branch of the business. Bellamy International had its fingers in several different pies, which suited Ion just fine. He might only be working in the mailroom right now, but he planned on making his way up the corporate ladder to a troubleshooting position someday.

Ion was ambitious, and it was his drive to succeed that had brought him to the company. Bellamy International was one of the top one-hundred businesses in the world. Where better for a young businessman to work?

“All your ideas are shit. I won’t lay off a thousand workers simply because the men in charge were fucking greedy crooks. You have to find me a solution that doesn’t result in people losing their jobs.”

Ion knew better than to ask why Mr Bellamy was furious. Patrick couldn’t tell him since being the head man’s minion meant he came across a lot of sensitive material, and Patrick could lose his job if he were to share any of it, even with another person in the company.

After handing Patrick some mail, Ion checked his list to see whom else he had to deliver to.

“They’re all in the conference room. Have been since this morning when I got here. Bellamy called a meeting of all the execs.” Patrick sifted through the large pile of envelopes Ion had given him.

“Why aren’t you in there taking notes or whatever he has you do during meetings?”

Patrick shrugged. “Not sure. I sent him a text to see if he needed me for anything. He told me to cancel the rest of his meetings for the day, and work on something else.”

They both jumped when a loud crash resounded from the conference room. Ion straightened from where he’d been resting his hip against Patrick’s desk. The door flew open then ricocheted back after hitting the wall with force. He and Patrick watched in amazement as Mr Richardson, the CFO, dragged Mr Bellamy out of the room.

“God damn it, Sidney. Why the fuck do I have them here if they can’t figure out one fucking solution? Monkeys are more intelligent than that group.” Mr Bellamy yanked his arm out of Mr Richardson’s grip. He paced the length of Patrick’s office area.

Ion had left his cart next to the elevator, and he found he was happy about that because his boss would’ve tripped over it. It was wise to stay out of the way when Mr Bellamy was angry, if only because he didn’t pay attention to where he was going. After pressing into a corner, Ion hoped no one would notice him.

“Patrick, can you call the cleaning crew and get someone to come up here? There’s a mess in the conference room.” Richardson seemed calm, but then he always did. Ion had never seen the CFO lose his cool in the three years Ion had worked for the company.

Mr Bellamy was the complete opposite. He lost his temper at least once a week, usually at Patrick, then later, Ion would get an earful about what a prick Bellamy was. Yet Mr Bellamy never seemed vicious with his anger. He simply had a short fuse, and intolerance for stupidity.

“Yes, Mr Richardson. I’ll make sure it gets cleaned up.” Patrick reached for the phone.

“Also, cancel all of Mr Bellamy’s appointments for the rest of the day. I’m taking him out of here. He needs to cool down before he ends up firing every person who works for him. I’d hate having to pay them bonuses to make up for his temper tantrum.”

“Shut the fuck up, Sidney. I wouldn’t threaten to fire them if they’d just do their jobs.”

Ion tried hard not to stare as Mr Bellamy passed by him, but it was difficult not to when the head of the corporation could easily be in the running for Sexiest Man Alive. Christ on a stick! If Bellamy hadn’t been worth a billion dollars or more, he could have made his fortune on the runway as a model.

Bellamy’s hair was a pale gold that he wore cut short on the sides and longer on top. His bright blue eyes sparkled with fierce intelligence, and hidden deep inside, a kindness that Ion knew Bellamy rarely showed to anyone.

Ion had happened to see one of Bellamy’s random acts of kindness to a homeless woman who had claimed one of the alleys next to the building. Ion had been making his way to work one morning, and he’d spied Bellamy covering the woman with what looked like a brand new blanket.

He had waited until Bellamy left before he’d dropped off the bag of sandwiches he had brought for her. It wasn’t much, but Ion had come to learn about the woman’s past, and she was a wonderful person who’d fallen down and couldn’t get back up on her feet.

Bellamy had nicely tanned skin, speaking of his time spent outdoors, doing all sorts of exciting sports like sailing and rock climbing. Ion got to hear about all those trips from Patrick, who had to book them for Bellamy.

Share what you thought about Rags to Riches: Part One Box Set and earn reward points.