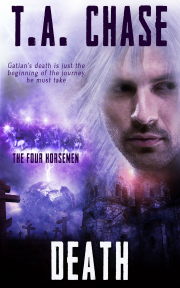 Book 4 in the The Four Horsemen series

Death, the Pale Rider and the most feared member of the Four Horsemen, has been searching through the centuries for a soul to save him from his solitary life.

In the 1700s, Gatian Almasia was rich and a sought-after member of Parisian society. No one realized he’d lost his reason for living three years earlier. When his sister accuses another nobleman of raping her, Gatian does what any older brother would do. He challenges the man to a duel, and kills him. Later that night, the dead man’s family takes their revenge on Gatian.

Gatian’s death is just the beginning of the journey he must take as Death, the Pale Horseman of Apocalyptic fame. While he doesn’t regret taking the nobleman’s life, the guilt of not being there when his lover died builds a wall around his heart, and until he accepts forgiveness, he must always be Death.

Pierre Fortsecue is a spoiled rich young man whose heart is broken by the man he thinks he loves. Finding himself alone in Paris, Pierre sinks into a haze of heroin. He gets a tainted baggie of the drug, and almost dies from it. Death arrives to take his soul, and something about Pierre touches the Pale Horseman, who steals him away to help him heal.

As Pierre heals and Death begins to feel again, they begin to wonder if love really is the only emotion needed to overcome desolation and destruction.

The room swirled with colours, bright and dark. Reds and blacks mingled with purples and greens. Pierre giggled as he lay on the floor of the hotel room, his eyes barely focusing on the actual furniture or the ceiling. The heroin raged through his veins, dragging his brain down into a drugged fog. He couldn’t remember how long he’d been in the room.

Had it been an hour, a day, or several days? Time rushed by at the speed of light, and yet the seconds crawled. He’d injected the drug into his arms and legs every time the thrill began to wear off. Pierre didn’t want to think about what had brought him to Paris and why he was alone in the hotel instead of wandering the streets. Being who he was made it easy to have the drugs delivered, and the people who brought it to him didn’t care how much he had as long as he paid them.

“I do believe I might be hungry,” Pierre shouted to the empty room.

Was he hungry or had some random thought skated across his mind that he should be hungry? How long had it been since he’d eaten anything? He guessed it depended on how long it had been since he’d arrived at the hotel. Pierre had eaten in the hotel restaurant before returning to the room and discovering his wonderful dream come true had disappeared into reality.

It was the moment he’d dropped the note when he’d called for the drugs to be delivered. No one had questioned him, and certainly no one stopped him. Not when there was a cash cow living in the penthouse suite, spending thousands of dollars a day and asking nothing but for them to allow the dirty, lank-haired man to go up there once in a while.

A noise caught Pierre’s attention, and he rolled his head over to one side. He found himself staring at a pair of shoes. Italian leather, he thought. They were beautifully made, and Pierre bit back the envy swelling inside him. Silly really, when he could have bought a hundred pairs just like them.

“Are we sure this is the right one?”

He trailed his gaze up from the shoes over the tailored black slacks and black linen shirt. His mouth fell open when he looked into the eternally black eyes of the most handsome man he’d ever seen. Everything about the man spoke of darkness, and falling into a pit without hope of climbing back out.

“As sure as I can be. The orders have never been wrong before.”

Turning his head again, Pierre blinked at the sight of the other man standing in the embrace of the dark man. Where the first man was darkness and sadness, the second man was lightness and happiness. His silver hair gleamed in whatever light shone through the windows. The blond’s eyes were as blue as the daytime sky.

“He doesn’t look like someone Gatian would go for,” the dark one commented, nudging Pierre with the toe of his expensive shoe.

The light one snorted. “I’m not sure what type Gatian would have gone for, but over the centuries, he hasn’t shown any interest in any of the men he came across. There must be something about this particular one that makes him special.”

“I guess. Well, what do we need to do to ensure he comes to find this creature?”

Pierre would have blushed if he had the energy, and the drugs didn’t cloud his thought process. As it was, he could make out the disgust in the dark one’s voice, but he had no shame left. He reached out towards the blond.

“Who are you?” He barely managed to ask the question.

“Don’t touch him. I bet he hasn’t bathed in a week.” Italian Loafer Dude curled his upper lip in disdain.

“Silence, Day. We aren’t here to judge him. That will come when his life is over.” The other one crouched down. “You may call me Lam.”

Day grunted. “Looks like his death will be sooner than anyone anticipated.”

“Hush, Day. Keep your opinions to yourself. It’s none of our business why this one was chosen for him. We have to make sure he’ll stay alive long enough for Gatian to come and get him.”

Lam brushed his hand over Pierre’s forehead. Pierre whimpered as he started to shake. He didn’t know how long it’d been since his last hit, but it felt like the high was wearing off. His eyes rolled in their sockets, and he wanted to plead with Lam to get him some more.

“What do we do with him now? He’s going to go into withdrawals, and once that happens, it won’t be pretty.” Day tapped his foot on the floor next to Pierre’s head.

“My orders are to make sure Gatian gets here in the next day or two. So Pierre needs to stay alive until then, at least, but he can’t do that if he’s not high.” Lam shook his head. “You’ll have to call his dealer and get more heroin delivered.”

“You’re an angel,” Pierre murmured before he began coughing. His insides twisted, and his stomach tried to crawl out of his throat. He curled into a foetal position, wrapping his arms around his legs and crying out as pain ripped through every inch of his body.

“How did you know?” Lam joked with a smile.

“I’m not the boy’s dealer, Lam. I refuse to buy drugs for him, or call someone to come and bring it to him.” Day sounded angry.

Pierre didn’t care who brought what. He simply needed heroin, or something to dull the pain.

“He needs to have the heroin, and you need to make sure he gets it,” Lam ordered. “You know this, Day. If you weren’t going to help me, why did you agree to come with me?”

I really enjoyed this wrap up (?) to the series. I added the (?) because there is a still a storyline floating out there regarding Lam and Day, which I’m not sure might not be another book in the f...

Share what you thought about Death and earn reward points.