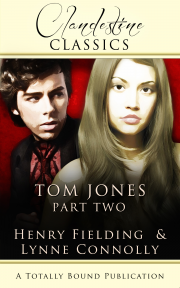 Book 2 in the The History of Tom Jones series

Reader Advisory: This book contains scenes of menage and multiple partners, as well as voyeurism.You only pay for the words our authors have added—not for the original content

Sophia retained the same gravity of countenance the next morning at breakfast; whence she retired likewise earlier than usual, leaving her father and aunt together. The squire took no notice of this change in his daughter's disposition. To say the truth, though he was somewhat of a politician, and had been twice a candidate in the country interest at an election, he was a man of no great observation. His sister was a lady of a different turn. She had lived about the court, and had seen the world. Hence she had acquired all that knowledge which the said world usually communicates; and was a perfect mistress of manners, customs, ceremonies, and fashions. Nor did her erudition stop here. She had considerably improved her mind by study; she had not only read all the modern plays, operas, oratorios, poems, and romances—in all which she was a critic; but had gone through Rapin's History of England, Eachard's Roman History, and many French M�moires pour servir � l'Histoire: to these she had added most of the political pamphlets and journals published within the last twenty years. From which she had attained a very competent skill in politics, and could discourse very learnedly on the affairs of Europe.

She was, moreover, excellently well skilled in the doctrine of amour, and knew better than anybody who and who were together; a knowledge which she the more easily attained, as her pursuit of it was never diverted by any affairs of her own; for either she had no inclinations, or they had never been solicited; which last is indeed very probable; for her masculine person, which was near six foot high, added to her manner and learning, possibly prevented the other sex from regarding her, notwithstanding her petticoats, in the light of a woman. However, as she had considered the matter scientifically, she perfectly well knew, though she had never practised them, all the arts which fine ladies use when they desire to give encouragement, or to conceal liking, with all the long appendage of smiles, ogles, glances, &c., as they are at present practised in the beau-monde. To sum the whole, no species of disguise or affectation had escaped her notice; but as to the plain simple workings of honest nature, as she had never seen any such, she could know but little of them.

However, while her appearance was of the most severely respectable, Mrs Western knew well how to appear perfectly estimable while conducting several discreet dalliances which taught her the practical side of that which she had studied assiduously and with great dispatch.

Mrs Western, knowing the value of discretion and having long admired the physique of the working man, tended to select her lovers from the lower orders, assuring their discretion either by withholding her name or giving them the largesse they required. She had never found a man who would make her completely happy, but she had enjoyed herself in the attempt.

Her last had been a couple of chair-men, one of those sturdy fellows who carried the gentry hither and yon in London. Long renowned for their strength of body, she had found reason to employ a likely pair to carry her to Covent Garden and such places for her daily recreation and shopping.

Since she owned her own sedan-chair, the men had perforce to enter the house to collect her. In common with most people fortunate enough to own their own transport, she kept the item in the main hall of her residence.

Unfortunately one day they arrived to discover the right hand pole, by which they lifted the chair, to be broken through, a long break that necessitated the purchase of a new shaft before they could carry Mrs Western anywhere.

She proposed that they accompanied her to a nearby park, where she could have her constitutional exercise, since she could no longer shop and her staff was otherwise occupied.

While the men glanced at each other, thick eyebrows raised, Mrs Western congratulated herself on the success of her scheme, which had taken little more than the judicious application of the axe in the kitchen to render the shaft unusable.

She stowed a number of golden guineas in her pocket, ensuring they were legitimate and very little clipped, since chair-men always checked such items for veracity. She considered it less good fortune that she had bespoken a small grotto in the park and more careful planning.

The men therefore accompanied her to her park, where she considered one circuit perfectly adequate for her health, and then declared herself worn out by her exertions. Since the grotto she had bespoken was situated at the far end of the park to her residence, she proposed they rest there for a short time.

The grotto would have been forgotten, had it not been for the people who considered it a useful place for trysts of a less than respectable nature. As it was, the guardians of the place probably earned more by keeping the trees before the entrance wild and untrammelled as they would have done had they maintained it perfectly.

Mrs Western discovered, to her pleasure, the presence of several soft cushions and even a blanket, set aside in a locked cabinet, to which she had the key. Claiming all people with entrance keys to the park owned a key, something that was far from the case, she proceeded to spread the soft blanket over the long bench at the center of the small arbor. The shelter had gained the name of grotto by means of a vista depicted in seashells on one wall, but the effort was perfunctory and probably constructed by an amateur, since it did not give the visitor any compensation for the lack of a view.

Mrs Western consequently bade her chairmen sit, one on each side of her, something they were willing to comply with.

It is often asserted that people of the lower orders have a less than adequate intellect, something I have found to be far from the case. Rather, expediency, such as the need to find a way of earning a living, has given them a quickness of wit and an abundance of native commonsense.

Consequently the chairment, who had no illusions of the nature of this visit, set to, one by setting his lips on her neck, the other his hand on her ankle. Receiving nothing worse than sighs, the ventured so continue, the one working down from the top, the other from the ankle upwards.

Mrs Western had fastened her fichu very loosely that morning and it was soon disposed of, revealing a pair of adequate titties, with sweet berry tips, which the first chairman, whose name was Samuel, applied himself to with great vigour. Even if his hopes of renumeration were not great, he would have enjoyed the treat, as his wife had long denied him the pleasures of her body, afraid of making yet another little Samuel.

Mrs Western had no such fears. Her years were more advanced, she ventured, than would make a child easily and she had ways of her own which helped to ensure her lack of issue. If the worst had happened, she’d have found a way. A long illness or a visit to the country would have dealt with the matter, and it wouldn’t have been the first time she had recourse to such a solution. Of such expediencies were orphans made, and not all the babes who found their way to the foundling hospitals were of humble origin. Nor, for that matter, babies who mysteriously appeared in unoccupied beds.

Currently, Mrs Western could remain sure that she would not discover any unfortunate events resulting from today’s adventure, and she set herself to appreciating the encounter.

Any evidence of her maidenhood having long disappeared, with the active life she led, she had no fear that she would sustain any discomfort, so long as the men she’d employed knew what they were about.

Certainly the big one currently caressing and sucking her bosom knew his work, and the one at her ankles was slowly working his way up. Too slowly for her liking, but she decided to allow him a little leeway, as he appeared to enjoy his work.

He worked his way up her calves, which she prided herself on for their shape and strength. Certainly he appreciated them, and when he reached her knees, she allowed him to push her skirt up somewhat to give him a view of her quim, which was by now eagerly preparing itself for the attention it was about to receive.

Share what you thought about Tom Jones: Part Two and earn reward points.