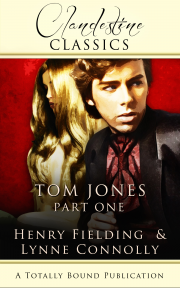 Book 1 in the The History of Tom Jones series

A motley history of bastardism, fornication, and adultery.

Returning home from a very satisfactory visit to London, the wealthy Squire Allworthy discovers a baby—in his bed!

He knows the baby isn't his, but once he discovers the mother he believes responsible, he undertakes to bring up the boy as his own, alongside his relative and heir. Tom Jones, as the baby is named, grows up utterly loveable, sexy, gorgeous and a bit of a scamp. Well, a lot of a scamp. While the Squire pleasures mistresses and schools maids in enjoyable discipline sessions, Tom learns how to live and love, with able help from the local populace. And makes enemies in the process, who plot their revenge on the bold boy who has captured the neighbourhood's hearts.

Not a word is altered in this classic novel—only added to. Lynne Connolly adds the parts that Fielding skimps on, and who knows but Fielding wanted to put them in?

Tom Jones is a bawdy romp through one of the most enjoyable eras in British history. Follow Tom, the Squire, the local round-heeled girl Molly and a cast of unforgettable characters as Tom grows to manhood in an English countryside of Hogarthian splendour.

Mr Allworthy had been absent a full quarter of a year in London, on some very particular business, though I know not what it was; but judge of its importance by its having detained him so long from home, whence he had not been absent a month at a time during the space of many years.

This enabled him to pay attention to a lady he had been acquainted with for a long time, but had sadly neglected of late, business having kept him in the country.

Mrs. Dickinson was the relict of a city businessman and had a very good sort of lodging in Red Lion Square; so good that when she invited Mr. Allworthy to save the cost of an inn and stay with her in comfort, he accepted with a good heart and voluminous thanks.

So pleased was the good lady to see him that she found great difficulty in keeping her fichu in place, a matter the squire was only too pleased to assist her with, and, the fichu disposed of, a great expanse of cleavage came into view, something Mr. Allworthy took advantage of with both hands.

On tumbling her back onto the sopha, the good squire animadverted on the size of her breasts, which had become bountiful in his absence. "Mr. Allworthy, I have had nothing to do but eat and visit the establishments that cater to my needs," the lady said. "I have long been in need of more vigorous exercise."

A gleam came into the good squire’s eyes when the lady announced that fact. "I believe I can help you with that ambition, my good madam."

"I’m a respectable woman, sir, and I do not lift my petticoats for a man unless I can also enjoy his company out of the bedroom. I have a reputation to consider."

The squire glanced up from his absorbing pursuit. "I hope I have not sullied your reputation. I would not wish to damage what you have taken so long to develop." But he was gratified by the widow’s words and appreciated her welcome.

Share what you thought about Tom Jones: Part One and earn reward points.