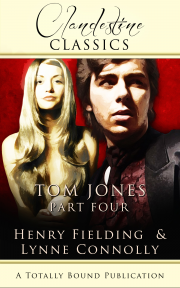 Book 4 in the The History of Tom Jones series

Part four of The History of Tom Jones.

Tom and Sophia arrive in London, but they still have to achieve their happy ending!

Tom and Sophia have reached London and the wicked city, with all its temptations, has a lot in store for them before they reach their happy ending! Tom has found himself a wealthy and titled mistress, but he is still striving to achieve the love of his life and clear his name from the calumny heaped on his head by the evil Blifil. However, he has his darkest days to go through before he can expect to achieve any happiness. And he yet might end up on the scaffold instead of in the arms of the woman he loves.

Sophia finds herself the centre of attention. A lord wants her hand in marriage, but her father has promised her to Blifil, whom she detests. Even her refined aunt wants her to marry someone who will give her the fortune she deserves, rather than the love she strives for.

Tom and Sophia have a way to go, but on the way they meet a dazzling array of characters and experience life in a London teeming with life and fun!

Nightingale had in reality mistaken Jones's apartment for that in which himself had lodged; he therefore strongly insisted on coming in, often swearing that he would not be kept from his own bed. Jones, however, prevailed over him, and delivered him into the hands of Partridge, whom the noise on the stairs soon summoned to his master's assistance.

Partridge found the protesting Nightingale away, but hustled him to his own room with promises of treats. He had a half bottle of brandy which he gave to Nightingale, all but a small dose that he deemed medicinal. When Nightingale flung himself on Partridge, declaring himself unable to sleep until he found some satisfaction from somewhere, Partridge gave into the inevitable and, considering if he accomplished this he would get to sleep the sooner, set to stripping Nightingale.

His companion helped as best he could, but such was his condition that proved unable to unfasten his own shoes. While Partridge was on his knees Nightingale managed to wrestle open the fall of his breeches, and his cock tumbled from his disordered underwear.

If Partridge had a fault it was his inability to resist temptation, indeed such was his tendency to fall into trouble he customarily tried to escape from his predicaments by avoiding them, but a juicy, already half-erect cock was beyond his powers of resistance.

He accordingly abandoned the shoes to take the column of flesh into his hand, whereupon it moved, hardening as he watched in gratifying fascination. He could no more reject the morsel thus offered to him than he could prevent his thoughts from flying to the possibilities in store, consoling himself with the fact that this wretch owed him for his interrupted sleep. Besides, Nightingale was in such a condition that his memories of the evening would probably be dimmed on the other side of sleep.

With a groan of surrender, Partridge took Nightingale’s cock into his mouth, the better to feel it harden and lengthen against his tongue. He caressed, licked and sucked, until he was satisfied that the member was in such a condition to grant him the best of pleasures, and then, taken by the sighs and moans coming from Nightingale’s throat, in between greedy gulps of the brandy, that he stood and divested himself of such clothing that stood in the way of achieving his desire.

He then lay on the bed and guided Nightingale to lie alongside him, and the two men kissed and caressed until both were in a state of excitement that they could not resist. Their tongues entwined, Partridge took Nightingale’s hand in his, introducing it to his now wet cock, such was the effusion he experienced when he thought of the unexpected encounter that had come his way this evening.

Nightingale proved adept at stroking and then he gripped Parson’s shaft and pumped it, right down to the balls until Partridge grew afraid that he would not pursue their delicious meeting any longer. And he wanted to feel the man from the inside.

Accordingly, he gave Nightingale one last, lingering kiss, licking deeply into his mouth before turning his partner on to his side facing away from him. He must make the man ready, but since Nightingale obligingly bent and presented his arse for inspection, Partridge knew the man was no stranger to dalliance of this nature.

He licked his fingers and set to, working Nightingale until he was open and ready to take whatever Partridge presented him with. Partridge considered that Nightingale might well take a cock larger than his, or even two at the same time and his mouth watered at the prospect. However he was just one man determined to take his pleasure before he returned to sleep.

Nightingale being nicely prepared, Partridge took his now aching cock in hand and guided it to the opening thus offered. He inserted the tip, enjoying the moans of his unexpected bed partner, and worked it slowly inside, unwilling to cause the man any hurt. For all his eagerness, Partridge had consideration for whoever offered his body for mutual pleasure, for pleasure it would be.

He rotated it until he found that special area of sensitivity unique to the male of the species, or at least, disregarded by most females. In his opinion, the stimulateion of this part was equal to the delight of touching a woman’s spot, that part of her that drove her as demented as a woman can ever be.

Carefully he withdrew and then drove deeper inside, the small opening clenching his cock with determination that echoed his own. Fucking was fucking, he always considered, and once inside a person, the differences were small. Except for the hard, masculine body, the firm, tight buttons of nipples and the playful sac between the legs, of course.

Having bethought himself of the playthings, Partridge reached around Nightingale’s body and caught hold of his ballocks, suspended in their fleshy sack, and manipulated them, working them between his fingers until Nightingale cried out his pleasure. “Don’t stop!”

Nightingale heard the now empty bottle fall to the floor, forgotten now. The sound made him work the harder to ensure the pleasure of both parties. He set to with a will now, forcing a response of delight from his bed companion. When he moved his hand from the balls to the cock, Nightingale cried out once more, and wetness flooded his hand, as the meaty morsel in his hand gave up its bounty and Nightingale came in a series of convulsive jerks.

It took only a few more strokes for Partridge to follow Nightingale into ecstacy, and after making free with the washcloth and restoring them both to a reasonable state, he fell asleep to the sound of snores from his friend. He had strong suspicions that Nightingale had indulged himself in other men before, and found himself content, reflecting that youth did not hold all the cards and sometimes the best wine is obtained from old bottles.

Share what you thought about Tom Jones: Part Four and earn reward points.