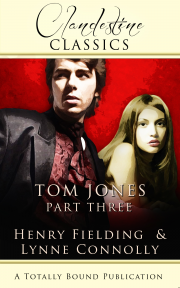 Book 3 in the The History of Tom Jones series

Part three of The History of Tom Jones.

Tom and Sophia travel through England, leaving havoc in their wake.

Part three of Tom Jones, Henry Fielding's saga of a young man's bawdy adventures in Georgian England, with added naughty bits! Forced to leave the love of his life, Tom finds consolation in the arms of several ladies and one or two gentlemen. The irresistibly handsome, insatiable boy becomes a man, but he is still steadfast, in his way, to his beloved Sophia.

Sophia has adventures of her own, and reaches London before Tom, to confront the voracious peeress, her cousin and her lover. But Tom still holds the only place in her heart.

These two search for each other, and when they finally meet, their love is rekindled, but fate is still playing games with them, and they have a way to travel yet, before it's possible for them to reach their happy ending. If, of course, there is one.

Now the little trembling hare, which the dread of all her numerous enemies, and chiefly of that cunning, cruel, carnivorous animal, man, had confined all the day to her lurking-place, sports wantonly o’er the lawns; now on some hollow tree the owl, shrill chorister of the night, hoots forth notes which might charm the ears of some modern connoisseurs in music; now, in the imagination of the half-drunk clown, as he staggers through the churchyard, or rather charnel yard, to his home, fear paints the bloody hobgoblin; now thieves and ruffians are awake, and honest watchmen fast asleep; in plain English, it was now midnight; and the company at the inn, as well those who have been already mentioned in this history, as some others who arrived in the evening, were all in bed. Only Susan Chambermaid was now stirring, she being obliged to wash the kitchen before she retired to the arms of the fond expecting ostler.

Our hero, on turning over in bed, made the delightful discovery that he was not alone, something he had quite forgotten in his slumbers. He continued his roll until he had the best mattress imaginable under him, in other words, the soft body of a woman.

Moreover, it was the body of a willing woman. When she opened her thighs, he felt he heat and the wetness of her, something he did not hesitate to take advantage of.

Sliding down her body, he paused at her generous breasts, always twin founts of pleasure for Jones, and took his time suckling them, pleasuring them both, until she sighed and moaned under him.

Then, instead of resuming the position in which he could give them both pleasure, he took the part of the most generous gentleman and inserted his shoulders between her thighs, the better to widen her legs and give her the most comfortable of footstools on his back.

As he elevated her to his satisfaction, she twisted, having awoken from the sweetest dreams imaginable, and discovered that which she dreamed of was real. But she wanted none of it; she wanted a part of the performance.

So, the sheets on the bed turned under her as she moved, and urged Tom to “Lift up, sir, that I might taste you. I thirst for what you may give me.”

Her breathless tones persuaded her young lover to obey her request. Accordingly, he, being the younger and more agile of the two, turned, presenting her with the best piece of meat she had seen for a long time. She lost no time in taking hold, and closing her mouth over the object for which she thirsted.

After letting out a great groan, Tom set to, and lapped the lady with a will, taking her nectar like some exotic bird at the flower. Or a good English bee, which sucks from flowers until content. For although Tom loved Sophia truly, he thought her lost to him, so he took his pleasure where he might. As long as the lady was willing, and this lady for sure and certain was.

Eventually, when he was done teasing and tasting, he took her tiny bud of flesh into his mouth and set to suckling with a will, making much use of his agile tongue to tease and entice.

So well did he succeed that she cried out and shuddered as he brought her to that sweet conclusion so long looked for. She gave up tormenting his cock with her mouth, and her temporary state of incoherent bliss gave him the opportunity he needed to reverse his position. He was now in a position to pleasure her, cock to cunny, and he did so, not losing any time and using the lubrication he had already imparted to her to drive into the depths of her form.

Again, he thrust, riding her hard. Her response was to lift her legs and curl them around his waist with remarkable dexterity for an older woman. However, it could be said that an older woman in possession of her faculties and her bodily strength would learn the ways of her form and could use it to better ability than her coltish younger sister.

Howsomever, she pleased Tom mightily with her work, and he set to with a will, rocking the bed they lay on with his efforts, which was something to behold as the bed was old and well made.

In very short order he had her crying out again, until her nails made lines down his back and he sweated prodigiously, but did not stop his efforts until he, too, had arrived as his looked-for conclusion.

They failed to put the bedding to rights, merely pulled the covers roughly over their bodies and curled up like kittens in straw.

Share what you thought about Tom Jones: Part Three and earn reward points.