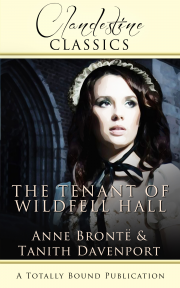 The Tenant of Wildfell Hall

Into the quiet village of Lindenhope comes Helen Graham, an attractive young widow and mother. Living alone with her son at Wildfell Hall, her seclusion attracts curiosity from the local people, in particular Gilbert Markham, whose interest in her is soon edged with desire—and Helen, despite herself, begins to reciprocate his love for her.

But when scandalous rumours begin to circulate about Helen's behaviour, Gilbert is filled with anger and jealousy. Helen attempts to clear her name by offering Gilbert her diary, which reveals the dark, passionate story of her former marriage to debauched rake Arthur Huntingdon, whose sexual and sensual desires fill her with excitement and pleasure but precipitate a gradual descent into hell.

Gilbert believes he could forgive her anything, but the lies continue to spread, threatening Helen's peace of mind and, above all, her physical safety. Will the secrets of Helen's past get in the way of their future?

'Well, but, Helen, I’m sure I’ve been very good these last few weeks. What have you seen amiss in me, and what would you have me to do?'

'Nothing more than you do, Arthur: your actions are all right so far; but I would have your thoughts changed; I would have you to fortify yourself against temptation, and not to call evil good, and good evil; I should wish you to think more deeply, to look further, and aim higher than you do.;

I was truthful when I said this, but I know I have many blessings to be thankful for, as I discovered on our wedding night, when we were truly united for the first time.

He was already in the room when I entered; I felt his hands rest on my shoulders from behind and he gave a low chuckle at my gasp of surprise. I was in my nightgown—Rachel had helped me disrobe before retiring herself—and his breath heated the nape of my neck as I felt his fingers teasing along the silk edging. I had chosen the material deliberately; it clung to my body, the sheen of the fabric highlighting every curve.

"Would you like me to undress, Arthur?" I asked.

"No, Helen," he answered, pressing a kiss to my shoulder and sending a chill along my spine. "I want to undress you myself."

My heart quickened, but I held myself still as slowly he slid the gown from my shoulders. The cool air on my skin made me shiver, my nipples hardening as the soft material dropped past my waist to land lightly around my feet, exposing my naked body to his gaze. I closed my eyes, feeling conscious of my bare skin, the curls at my quim, the growing wetness inside me.

"Don’t move," he commanded, and I felt his fingers begin a slow, tortuous glide along the curve of my spine. One hand slid under my ribs to cup my breast, his thumb brushing against my nipple, and I was unable to suppress a moan as sparks of pleasure radiated from that tender spot. Instantly the movement was repeated, his other hand mirroring the motion until I cried out, overwhelmed by the unfamiliar sensation.

"I love that this is all so new to you, my Helen," Arthur whispered in my ear as I let my head fall back onto his shoulder, my body weakening as he continued his sweet assault on my breasts. My knees began to tremble. I clenched my fingers tightly, aching for his hands to move lower, to touch me where I had touched myself so often while thinking of him, but afraid he would think me too wanton if I asked. So new to me, indeed! What would he think if I touched myself in front of him? Would he be surprised? Shocked? No—he would not, I was sure. But he might insist on pleasuring me himself, and my spot pulsed at the thought, imagining myself on the edge of ecstasy, him removing my hands and holding them until I begged him to bring me to completion.

He slid his hands down to my hips, leaving me moaning at the loss, and turned me to face him. Before I could stop myself, I reached my hand out to touch his swollen member, which jutted towards me, almost brushing against my stomach. He groaned as I closed my hand around the tip, which was glistening and sticky with moisture, almost seeming to harden further under my touch.

How strange it was to know that I had such power, that I could bring him such pleasure with only a simple touch! I tightened my grip, feeling the skin move as I tugged, but before I could continue he had caught both my hands in his and was holding them at my waist.

"My darling," he said, with a smile, manoeuvring me backwards as he spoke until my calves hit the edge of the bed. "If I let you do that, I shall lose all control, and that will never do. Lie back for me—let me see you waiting for me."

Trembling, I lay back on the bed, my breath coming faster as he stood watching me, his lazy gaze lowering to rest at the fork of my thighs. Instinctively I parted my legs, blushing as I felt the moisture seep from inside me and dampen my folds.

The smile on his face took on a possessive, lascivious quality.

"How beautiful you are," he whispered. Slowly he placed one knee and then the other on the bed, the mattress dipping under his weight as he moved towards me. He laid one hand on my breast, feeling my heart beat rapidly beneath.

He lowered his head and kissed my nipple, laving it with his tongue, then trailed more kisses down my body—my ribs, my stomach, my hips—until I was trembling with anticipation. His breath rushed over my quim, and for a moment I thought he would kiss me there—oh! How I wanted that!—but instead he paused, watching me with desirous eyes, and slowly slid one finger inside me to the knuckle.

"So pure," he whispered, caressing me as I moaned. He reached forward with his thumb and swept it back and forth over the button of flesh. I cried out at the sensation, my body convulsing; it was so much sweeter, so much more pleasurable than when I had touched myself, and I longed for him to continue.

"Helen," he growled, "tell me you want this." I recognised the words from our first kiss, and felt my heart bound and my quim tighten at the knowledge that now I could be truthful; now I could tell him what I wanted.

"Tell me how much you want this."

"I want this more than anything," I moaned. His finger was still moving inside me, his thumb still applying delicious pressure, and my wetness was leaking onto his hand and the bed.

"How long have you wanted this, Helen?"

Oh, he was torturing me! "Since I first met you," I whispered, moving my hips to match his touch. He smiled and crooked his finger inside me, touching a spot that made me clap a hand over my mouth and shriek—the pleasure was exquisite, and I was on the verge of begging him to take me.

I arched my back, aching for him. "Please, Arthur, take me."

His finger disappeared, making me moan with the loss, and then I felt the tip of his member at the entrance to my quim.

This book took the traditional novel and turned it on it’s head so to speak by drastically spicing it up. That spice, for me, made the novel more entertaining and allowed me to read through all the fictional...

Share what you thought about The Tenant of Wildfell Hall and earn reward points.