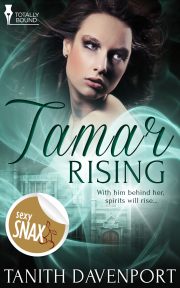 With him behind her, spirits will rise…

Tamar Steele’s star is on the rise. Her relationship with boyfriend Jason Bray is blossoming, as is her bond with her spirit guide, the ghost of Jason’s brother Matt, who has been training her in mediumship. And, newly installed as the medium for her crew of paranormal investigators, she is already receiving press attention, which brings her to the notice of Scare Seekers—a paranormal entertainment show keen to film an episode with Tamar’s team.

But when teammate Hana is violently possessed, filming is thrown into disarray. The dark spirit seems to disappear at first, but when a frenzied Hana attacks Tamar on the drive home, Tamar realizes that her mediumistic abilities may not be strong enough to fight the demon.

Until one day Tamar discovers her powers are increased by having sex on haunted ground and finds that maybe she and Jason can save Hana, their team’s reputation, and themselves…

It was eleven a.m. The sunlight lay in pools along the hallway, falling in shafts from each window. Tamar Steele pushed open the office door and immediately made for the Bagel Nash bag on the round table in the center, waving as she passed Hana, who was on the phone.

Another booking—hopefully. It was good to be busy.

She retrieved a wrapped bagel and a can of Coke from the bag and moved to her desk. Her laptop was already switched on, the email icon blinking.

So many ghosts, so little time.

It had been a good few months for Tintagel Paranormal. Since she had taken over from their previous medium, alleged celebrity Reed James, Tamar had worried that their already shaky paranormal events team would collapse under the financial pressure. Reed had been Z-list at best, but even his minor name had served as a draw, while her own was virtually unknown.

Tamar Steele, the singing medium. The discovery that she could invite spirit activity by singing had been a good hook on the publicity front but still, she was far too new on the scene to pull the crowds like Reed had. Failure was a constant worry.

And yet things had turned out quite differently.

Reed’s departure and her promotion to the rank of team medium had been covered in Ghost Voices magazine, that had also promoted multiple YouTube videos of her as ‘the singing medium’ on their website. As the hits had increased, so had their bookings. The attraction of a medium who sang to attract spirits—with considerably more reliability than many others in the business—had doubled their figures in a month.

Reed, of course, had attempted to badmouth them in the press, but the first article describing him as an ‘angry has-been’ had silenced him for the time being.

“Got a new one,” said Hana, replacing the receiver with a click. “Looks like your star’s in the ascendant again.”

“Oh?” Tamar spun her chair round, half a bacon bagel in hand. “What is it?”

“Scare Seekers?” Tamar made a face.

“Yeah, I know. Trash TV. But their viewing figures are pretty high. It should do us some good.”

“Fair enough. I’ll try not to get stage fright.”

“Great. I’ve also had a call from a ghost photographer asking if he can join us.”

“What the hell? Anyone can photograph a ghost. What’s so special about him?”

Hana shrugged, but her eyes were dancing. “Apparently he photographs them more often than most.”

“Probably.” Hana turned back to her screen. “I’ll politely tell him to bugger off.” She paused for a moment. “What’s happening with your flat? Have you heard?”

Tamar groaned. “No. Not yet.” Her landlord had contacted her the previous week to let her know that her rent might be going up. Despite the rise in bookings, Tamar’s cash flow was not quite at a level where she could afford higher rent, and it had been weighing on her mind.

Reviewed by Erotica for All

Share what you thought about Tamar Rising and earn reward points.

When did you first realize you wanted to be a writer?
It’s something I wanted my whole life, but I only started writing for publication when I was 27. Up until then I had only ever written for my own enjoyment (and none of it was much good!) I was inspired by the onset of my thirtieth birthday to get my debut novel finished, and the rest is history.

• . Possibly the most beautiful place I've ever visited. Stunning coastal scenery, close to and Vesuvius — two of the most remarkable sights I've ever seen — and offering absolutely delicious pasta, mozzarella and lemon tiramisu.