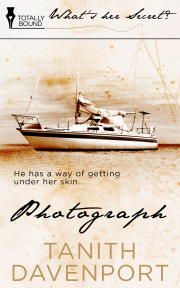 She wanted him. Her sister married him.

Tara Thornton hasn’t spoken to her sister in two years, ever since Azure married the man of Tara’s dreams. Tired of the rift, Azure invites her to take a Mediterranean cruise on a friend’s yacht and, bowing to family pressure, Tara accepts.

Forced to be in close proximity with the man she still desires, Tara is thrown into confusion. The presence of celebrity theme park owner Liam Wilder and the reality of his marriage to Azure send Tara into a tailspin and, in an attempt to regain control, she responds to the advances of hot fellow guest Ryan Hyde, while determined to feel no affection for him.

But Ryan has a way of getting under her skin, and Tara’s plan to get closer to Liam is rapidly losing its importance as Ryan begins to break down her defences. Can she let go of Liam, let Ryan into her heart…and tell Azure the real reason for her silence?

The packing was finally done, and she could relax.

It was a beautiful day. As she came out of the house, Azure paused to look around, taking in the view. A protective line of trees surrounded the mansion. Before her were flower beds and lush grass, and in the distance the tips and curves of iron structures—roller coasters in the Land of Light, the theme park attached to the property.

Sunlight peeked through the trees, dappling the lawn. Her sunglasses perched on top of her brunette head, Azure made her way across the grass, her hand automatically finding its way to her back pocket as she walked.

The familiar hard shape met her fingers. Good. Her mobile phone was still there.

All the preparation was finally coming to fruition. Tomorrow they would be on their way. First stop Majorca, three nights in the villa, then they would meet the Sugiyamas and their yacht—if the Sugiyamas were on schedule. Nik usually was, but Tracey could easily have made them late.

Tracey. Azure grimaced. God, this trip had better be worth it.

The planning had taken a week. She had chosen what to pack—the maids had packed it. It had all sounded so straightforward, and indeed it had been once their newest maid, Janice, had been taken off the job. She had managed to ruin three dresses by stacking them over a bottle of perfume and dumping a pair of boots on top. Azure’s husband, Liam, had been decidedly unimpressed.

Right now he was back in the house checking their flight details. Azure had left as soon as she had placed the order for lunch and dinner with their cook. It was a beautiful day and the garden had been calling to her.

Ahead of her stood a white trellis bedecked with climbing pink roses. Azure followed the path through it and came out into the rose garden.

It was her favourite part of the grounds. Footpaths formed a maze through rows of multicoloured roses, leading to a fountain in the centre, three mermaids spilling water from urns into a broad pool. Azure sat down on a wooden bench and leaned into the violet roses beside her, closing her eyes as the scent enveloped her.

Liam’s words from that morning floated back into her head.

‘It’ll be fine. She said she would come.’

A heavy sensation settled in her gut. It had been such a long time since she had seen her sister. And for such a ridiculous reason. But for Tara it had obviously been serious to have held onto it for so long.

Would she change her mind at the last minute and not come?

Show up and scream at her?

Tara wasn’t the sort of person to waste her time. It would be pointless for her to bother coming if she had no intention of speaking to Azure. Given that Tara didn’t know any of the other guests it would make for a very lonely cruise.

An image of Tara circulating in the yacht’s dining room, befriending everyone while ignoring Azure’s table, came to mind. Azure shook her head, forcing herself back to reality.

It was done. There was nothing for it now but to make the trip and hope.

As a light breeze flowed through the clearing, a rustling could be heard in the bushes over the splash of the fountain. Azure’s head snapped round in the direction of the sound, her hand automatically touching her back pocket again. Was that—?

Idiot. It was the wind. You know they can’t get in here.

She took a deep breath and pressed a hand to her chest, feeling her heart racing. To her annoyance, her fingers were shaking.

Calm the fuck down! It was nothing!

It was ridiculous. Security was airtight around the mansion and she was miles away from any public areas. If she listened hard, she could just make out the roar of the roller coasters and the faint screams of the riders, but nobody could get from there to here. Very few people even knew where the mansion was. It was concealed from view as much as physically possible by trees, land and fences.

Still, her body was attuned to every possible hint of danger. She had hoped to train herself out of it, but it had been three years since her honourable discharge—and despite the therapy, despite everything, she was wound as tight as a coiled spring.

She did know. And she would be safe on the yacht. No cameras following them. No crowds, no noise. It would be fine.

She turned to go back to the house. Liam was always able to settle her nerves. He knew what she needed—what she wanted.

It would be fine.

As the house came back into view, she could see him standing in the doorway, waving to her. Azure waved back, smiling.

She would be fine.

She had been standing in front of the bedroom window for fifteen minutes, staring out over the grounds, unable to drag herself away. Usually the sight of the swaying trees, the flower beds dotted about the lawn, calmed her. Not today. It was physically impossible for her to relax.

Everything around her drove her crazy. The carpet made her feet itch. The ceiling fan’s gentle whomp seemed twice as loud as usual. She had tried lying on the four-poster bed and had found herself obsessively picking threads in the curtains. Nothing could settle her.

Liam’s voice behind her brought her back to her senses.

Azure turned to see her husband closing the door behind him.

Liam shook his head, crossing the room towards her as he spoke, “You’re not. But I think you need something to draw your attention away… Right?” On that last word he cocked his head to one side, a wicked glint in his eye.

Azure felt a slow smile kink her lips as she recognised his mood.

Something to draw her attention, indeed.

“Is this something I should be naked for, maybe?”

Liam arched an eyebrow. “I think that might help.”

Holding his gaze, Azure slowly lifted the edge of her top up and over her face. She deliberately took her time, keeping her hands above her head for as long as possible, letting him absorb the view.

When she finally threw the garment on the floor, Liam had taken a step closer, the smile gone from his face to be replaced by a flush of desire.

There was something about him when he was in this mood. His blue eyes would glow, his cheekbones seeming to sharpen, his muscles taut with lust. His curly blond hair was even messier than usual—he liked to run his hands through it when he was thinking. Even though he was wearing most of a suit—shirt and trousers, no tie and for some reason, no shoes or socks—he gave the impression of an attractive, yet nutty professor.

Initially, Photograph is a hard book to get into because of Tara’s personality. Stick with it because it’s so very worth it. The heroine’s character growth is significant and powerful,...

Reviewed by The Divas of Desire

There’s a lot to enjoy in the story: hot and smexy sex, intrigue, excitement, and a peek into the lives of the rich and famous. What really stuck with me was the theme of love vs. obsession and the difference...

Share what you thought about Photograph and earn reward points.