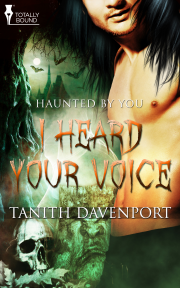 I Heard Your Voice

Haunted By You collection (Book #4)

Spirits will rise. Inhibitions will fall.

Tamar Steele's life was never supposed to be like this. A sensitive working with a team of paranormal investigators, she is trapped in a loveless relationship with the team's medium, Reed James, who believes that having sex on haunted ground enhances paranormal activity. Tamar maintains their partnership for the sake of the crew, forcing herself to ignore the burgeoning sexual tension between her and fellow investigator Jason Bray.

Until one night when, alone and bored, Tamar sings to herself and is knocked to the ground by an invisible force. Somehow she is able to invoke spirits with the power of her voice. And one particular sexy, matchmaking spirit is determined to turn her life upside down.

It was going to be a long, long night.

Throwing open her car door, Tamar shivered as she stepped out into the cutting wind. The car park was almost pitch black, brightened only slightly by the meagre light cast by lamp posts out in the street. To the sides, tall trees left long, eerily shaped shadows across the ground. She moved around to the rear of the car, turning to view the house as she did so.

Behind her, she heard tyres crunch over the gravel. Headlights bathed her in bright light, briefly blinding her. Ducking away, Tamar opened the car boot and leaned in to start unloading the equipment.

"Hi, Hana. Yeah, thanks." Tamar glanced back over her shoulder at the blonde, who was wrapped up snugly in a heavy jacket and jeans. Hana was always early to these things and had probably unpacked her own gear already. "Did you bring the Dictaphones?"

"Yeah, they’re inside. Chris is setting up the slideshow." Hana reached into the boot and surfaced with an armful of headphones and microphones.

Tamar picked up the bag of K2 meters and decided against offering to take some of Hana’s load. Hana hated any suggestion that her skinny figure might translate to lack of strength.

"How many are we expecting?"

More car doors were slamming behind them. Tamar reached up to close the boot, but froze and winced as a tearing pain ripped across her shoulders.

About to move away, Hana paused mid-turn. "Was that your back?"

"Yeah." Tamar hung her head down to stretch out her neck, breathing heavily against the pain. "It’s been bad today."

"In my pocket. I’ll be fine in a minute." Screwing her eyes shut, Tamar fought to regain control. God, that hurt.

The speaker was outside her field of vision, but Tamar would have recognised that Leeds accent anywhere. "I’m fine, Jason. Could you shut the boot for me?"

Eyes still closed, Tamar stepped backwards, hearing a slam, followed by a startled grunt from Jason. She opened her eyes to see that Hana had dumped her equipment into his arms.

"While you’re here, you can carry that lot." Her voice carried over her shoulder as she took off running towards the house. "I’ve got people to tick off."

Tamar looked up at Jason, exchanging raised eyebrows as they set off for the main entrance of the house. The front door had been opened and light was spilling out onto the courtyard, illuminating Hana as she stood with her clipboard, checking the names of a small group of unfamiliar people. Beside her a billboard read 'TINTAGEL PARANORMAL INVESTIGATIONS'. Underneath, in smaller letters, was the name of their location, Meltham Hall.

It was the third location they had investigated that month, and the most impressive. A former stately home, now a museum, Meltham Hall loomed darkly above them, a vision of leaded windows and moss-coated walls. Tamar had already visited the place in daylight, so she knew to turn right as they walked into the slightly dilapidated-looking entrance hall, through a doorway that led into a room set up with rows of plastic chairs. Chris was adjusting the settings on his projector at the front of the room. Hearing their footsteps, he turned round and smiled.

Reviewed by Erotica for All

Overall, I enjoyed this novel by author Tanith Davenport and would more than likely find myself reading more titles by her.

Share what you thought about I Heard Your Voice and earn reward points.