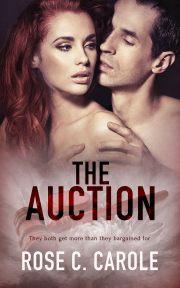 When David puts his sub Jenna up for auction, they both get more than they bargained for.

Jenna is unhappy that her Dom is putting her up for auction at their club event. But he isn’t exceeding her limits, so she has to do as he says. Watching the other participants offer themselves up and get bought increases Jenna’s confidence and as the evening goes on, she finds beauty in unexpected places.

Watching the scenes after the auction is over definitely excites her and her two Doms for the evening. By the time they have their own scene in the harem room, everyone is so turned on they can’t wait. After an intense experience, Jenna comes to realize that not only have she and her Dom connected in a way they hadn’t before, but they’ve learned a lot about each other that will help keep the fires alive in their relationship well into the future…

Publisher's Note: This book has previously been released as part of the His Domain Anthology with Totally Bound Publishing.

Jenna stood looking at the scraps of fabric that were supposed to be her outfit for the evening and sighed. There was no way around it. David had been so excited when he’d spied the outfit on a mannequin in the flea market. But the mannequin had represented a size six, so when the elaborate scarves with the metal bells—which were supposed to go around the waist of a belly dancer so they jangled when she danced—had been draped around the figure like a bikini, one for the top and one for the bottom, it had looked beautiful. But Jenna wasn’t a size six—she was more like a sixteen. At least she had been able to convince David that she needed two scarves for each piece.

Jenna tied the first two scarves together and wrapped them around her waist. The front wasn’t too bad. Thankfully it came to the tops of her thighs and covered her completely. But the back allowed her ass cheeks to peek from below, and there was no way David was going to allow her panties, so she was going to be flaunting her backside. Oh well, of all her features to be exposed, she was more comfortable with that one.

The top was a bit tricky. Her ample breasts were hard to contain when she pulled the scarves from around her back up over her breasts and tied them like a halter top. This was not like a bra, holding her in securely. She would have to be careful that the top stayed in place or she would slip out for all to see. Ugh!

She wasn’t happy about this whole auction thing, anyway. It was common practice in BDSM dungeons to auction people off for play. It was a way for people to get to know one another in a fun environment, and the auctions always had a great turnout. But Jenna had never participated other than as a spectator, not wanting to put herself up there with all those cute young things who looked so tempting. It would be too embarrassing when no one bid on her. She was the type who was much better when you got to know her. It was how she’d gotten involved with David. They’d met at a munch, then for coffee a few times, and finally they’d played in the club.

Now David, who had collared her a year ago, was going to put her up for auction. She had tried to talk him out of it, but he was proud of her and wanted to show her off. He was the auctioneer so he had control over the situation. He would also be sure to supervise any play that happened after the auction—in fact, he planned to participate—and he would be careful to restrict what kind of play they would engage in. It would all be delineated on her auction application form. Despite her reluctance, he was her Dom, and as long as she wasn’t in danger of getting hurt or going against her hard limits, she would do what he wanted. Truth be told , she was torn between excitement and dread.

She removed the outfit, put it in her bag and donned her street clothes for the trip to the club. The fantasy rooms that were usually closed to the members of the Lair because they were used by paid, professional Dommes were being opened for the evening. She had only seen them once before. There was a schoolroom, a medical office, a dungeon-like room with stone walls, an interrogation room and a Victorian bedroom. The biggest room was a harem room, and the auction was going to take place there.

David was waiting for her downstairs, holding his own bag with his toys and his outfit, except for his leather kilt, which was on a hanger and draped over his shoulder.

“Ready?” he asked, his voice full of anticipation.

“I guess so. I wish you would at least rethink my outfit. I feel so much better in a corset. And most of the other women will be wearing one, as well.”

David sidled up to her, pressing his body against hers and kissing her softly on the cheek.

“I don’t care what others are wearing. I love you in that outfit. You look so hot.”

Jenna rolled her eyes at him. She could afford the disrespectful gesture since David’s hands were full and he couldn’t swat her ass. But she moved away from him anyway after she did it. She could never quite predict how he would react. He kept her on her toes, which made their relationship very intoxicating, even two years in. David just raised his eyebrows at her, which she knew meant, You’ll pay for that later.

“C’mon. I don’t want to be late. I have to go through all the applications for the auction and make sure I’m familiar with each person when it’s their turn.”

He led her out of the house. It was time to face the music.

Rose has been an avid reader all her life and pursued that obsession into the publishing business, where she worked in both production and editorial for books and magazines. When her son went off to college, she decided to fulfill another passion and went to culinary school, thinking she would write a cookbook but loving the cooking so much she became a caterer. But her love for books is ever-present and she finally decided it was time to follow her own creative muse and write the kinds of books she enjoys reading. She hopes her readers enjoy them as well.

Share what you thought about The Auction and earn reward points.