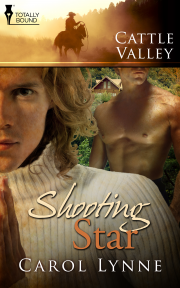 Book 24 in the Cattle Valley series

Fleeing Hollywood from damaging and false tabloid reports, Brac Riesling hides out with his friends Kit and Hawk in Cattle Valley. Although he believes he's simply evading intrusive paparazzi, danger lurks just around the corner.

After years spent as a secret soldier for the United States government, new Cattle Valley deputy, Al Jessup believes shielding the television heartthrob from nosy reporters will be an easy assignment. Becoming infatuated with Brac isn't part of the plan, and Jessup struggles to remain professional despite the temptation Brac provides.

When Jessup gives in to his desire and Brac nearly pays for the moment of passion with his life, Jessup vows not to make the same mistake twice. He calls in a favour from the only man he trusts with Brac's life, James "Priest" Evans. Priest agrees to guard Brac at a secret location while Jessup searches for the unknown gunman. Jessup's resolve to put a halt to the budding relationship with Brac is tested when he witnesses the easy-going relationship Brac and Priest have formed after only a few days.

With Ezra James’ birthday barbecue in full swing, Brac Riesling tried to stick to the shadows. Everyone he’d met since arriving in Cattle Valley had been incredibly nice, but Brac was starting to tire of always being on his best behaviour. Not that he wanted to fart or burp, but if the occasion arose, it would be nice to know it could pass without ending up in the gossip rags.

He took another sip of his beer and stared out at the grazing cattle in the pasture. The tableau in front of him reminded him of home. Although he rarely got home to Iowa, he thought of it daily.

At first his parents had been thrilled that Brac had managed to make a name for himself in Hollywood. Landing a coveted role on the top rated soap opera of all time had pushed him into the public eye, but it wasn’t until he’d been named one of the sexiest actors in Hollywood that the reporters began digging into his personal life. When news of his homosexuality broke, Brac had tried to lay low. Unfortunately the reports refused to let the story die without wanting every detail. They’d shown up at his family farm, and taped his parents without them even knowing it, all in an effort to get an exclusive story. Brac had paid a lot of money to have a tall fence constructed around the majority of the property, but it had done little to ease his parents’ peace of mind. He would have loved to go home more often, but reporters tended to follow him. In an effort to save what was left of his relationship with his folks, Bob and Carol Hostetler, he’d been relegated to a once-a-year visit in January.

Brac walked closer to the heavy decorative wooden fence that separated the ranch and yard from the pasture. After setting his empty plastic cup on the ground, he climbed up and sat on the top of a thin, two-by-four-inch board. It took a few moments to get comfortable, but with his feet resting on the next board down, Brac finally managed it.

After inhaling, Brac grinned. “Smells like home,” he whispered to the clear evening sky.

“Better watch yourself. There’s a bull in that pasture that would love nothing more than to knock you off that fence and stomp you to the ground.”

Brac glanced over his shoulder. “What’s his name?” he asked the stranger.

“Midnight,” the handsome man said. He stuck out his hand. “I’m Jax Brolin, foreman of the EZ Does It.”

Brac climbed down from the fence and shook Jax’s hand. “Brac.” He stared back out towards the field. “Midnight’s a pretty name.”

“Sure is, but his full name is Midnight Massacre.” Jax chuckled. “Just kidding. He’s not like the bulls at the Back Breaker. Midnight’s more of a lover if you know what I mean?”

“So if he were to actually knock me off the fence and stomp me to the ground, he’d at least lick me afterwards?” Brac smiled. “It might be worth it. I’ve had a bit of a dry spell lately.” As soon as he’d said it, Brac winced. Talking too much was how he always managed to get himself into trouble. “You know I was just kidding, right?”

Jax slapped Brac’s shoulder. “Relax. You don’t have to be on guard here. We’re a laid-back bunch. No one’s going to run to the press. Hell, most of us hate those fuckers.”

“Because of what happened two years ago?” Brac hated to get nosey, but he doubted there were many gay men in the country who hadn’t been glued to the unfolding story of the grandstand collapse. Out in the real world the town of Cattle Valley was whispered about in gay circles, almost like an imaginary place.

“Yep.” Jax glanced up at Brac from underneath his black Stetson. “We’re a pretty private group of people. The accident hit us hard, but it was the reporters traipsing around town, trying to dig up dirt, that brought us together.”

Brac had a feeling he’d just been warned not to pry. “I understand.”

Jax stared at him for several moments before nodding. “Good.” He gestured towards the partiers behind him. “We lost one of our own in the accident. If you need a place to hide from reporters, you’re welcome here. Last time some nosey sonofabitch came around trying to dig up a story on Jim Becker, Ezra ran him off before he could make it up the drive.” Jax laughed. “Believe me, when someone as big as Ezra runs you off, you don’t come back.”

“Thanks.” Brac was surprised by the offer, but appreciative. “It’s Kit I worry about. I’ve spent the last nine years being photographed and lied about, but it’s all new to her.” He wanted to make sure Jax knew the truth of the situation. If the man had offered him refuge, it was the least he could do. “There’s nothing going on between us. Kit’s my best friend, and I’ll do anything to make sure it stays that way.”

Jax shook his head. “No need to explain. Just thought I’d put the offer on the table.”

Jax gave a tip of his cowboy hat before walking off. Brac watched the retreating man until he disappeared in the crowd. He turned back to the pasture and leaned his forearms against the top rail, thinking over Jax’s offer.

..fast paced and riveting story...I can't wait for the next installment in the Cattle Valley series.

I just love this series, it seemes to just get better.

Share what you thought about Shooting Star and earn reward points.