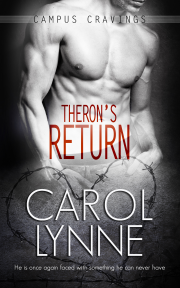 Book 11 in the Campus Cravings series

When a near tragedy calls thirty-seven year old Theron Demakis back to BK House, he is once again reunited with Michael Storm. For weeks, Theron has done his best to bed every woman he knows in an attempt to forget his errant feelings for the young college student. But it didn't work. Faced with caring for Michael, Theron wonders if he'll be able to put his feelings aside in the name of the Demakis family. Being the only bi-sexual son, it's up to him to continue the family name.

Twenty-three year old, Michael had given up on life. The one thing he wanted to live for was Theron. When Theron abandoned him to flee back to his safe heterosexual life in New York, Michael shut down completely.

Now Theron is back, and Michael is once again faced with something he can never have. Maybe settling for a short-term affair is better than never having Theron's arms around him again.

“Sonofabitch,” Michael yelled and threw the disposable razor against the wall. He looked down at his bloodied fingers and shook his head. For almost an hour he’d tried to take apart the F’in razor and had gotten nothing but cuts on his hands.

Digging in his desk drawer, Michael managed to find a box of bandages. Five adhesive strips later, he picked up his wallet and stuffed it in his back pocket.

Heading down the stairs, he was surprised to see Demitri and Aaron. He paused midway down. Demitri stood in profile talking wildly with Charlie and Jack. They still hadn’t noticed him and he took the opportunity to study the Greek man’s features. Michael couldn’t get over how much all the Demakis brothers looked alike.

Theron may be smaller built than the other two, but he still held the same commanding presence.

“Hey,” Jack called, bringing Michael back to the present. “Demitri and Aaron decided to stop in for dinner.”

Jack looked down at his watch. “Well, you’ve still got an hour. I just put the potatoes in with the roast.”

With a nod, Michael resumed his trek down the stairs and out the front door. He took off towards the pharmacy a couple of blocks down. Once there, he stood in the razor aisle looking for what he needed. Damn. Does everyone use safety razors?

He supposed he probably needed to go to a hardware store, but knew he didn’t want to walk that far. He’d almost given up when his eyes landed on a small bin of clearance items. Almost like it was some kind of sign, the first thing he spotted was a small pocket sized box knife on a key chain. His head tilted to the side as he picked up the package. Who the hell would need a knife on a chain? With a shrug, he took his prize to the counter.

By the time he got back to BK, Michael’s nerves were starting to get the better of him. He walked in and headed up the stairs.

“Dinner in ten minutes,” Jack called after him.

“Just gonna wash up,” Michael answered back. He put the package under his pillow and went to the bathroom. Brian was just coming out of a stall when he walked in.

“Hey.” He noticed Brian looked a little down. “How’s school?”

Brian shrugged. “Sucks. I can’t tell anyone where I live. How am I supposed to make friends?”

“Who said you couldn’t tell anyone where you lived?” He shook his hands, noticing the bandages were quickly coming unstuck, and reached for a paper towel.

“No one. More like self preservation. How many fights do you think I’d get into if the other guys knew I lived in a gay house?” Brian’s apparent shame made Michael feel even worse. Dammit, he couldn’t help the way he was. If he could snap his fingers and suddenly find pussy desirable, he’d do it in a second. Being gay had done nothing but alienate him from his family and caused him to fall in love with the wrong man. Besides, he doubted there were gangs of women around who took pleasure in tying men up and raping them repeatedly.

He shook his head. With his nerves back in check, he turned his back on Brian and left the bathroom.

“Dinner!” Charlie yelled up the stairs.

Taking a deep breath, he went down to the dining room. His usual seat was open, so he slid in and waited.

“So, how’ve you been feeling?” Demitri asked.

“The same,” Michael answered. He wanted to ask about Theron so badly he could barely stand it. Did Theron ever ask Demitri about him? Did he call Charlie? “I bet

Theron’s glad to be back in New York. It must’ve gotten pretty lonely trapped in the house with me all those weeks,” he fished.

Demitri and Aaron looked at each other and started laughing. “From the sounds of it, he’s making up for lost time. Every time he calls he’s seeing someone new.

That brother of mine is a regular fuck machine,” Demitri said.

Michael felt bile rise in his throat. The words did more to cement his resolve than anything he could’ve said to himself. “Shit. I just remembered I have a paper due in the morning.”

Looking up at Jack he plastered on the fakest smile he’d ever given. “Mind if I fix a plate and head upstairs?”

Michael quickly filled a plate knowing the food wouldn’t be eaten anyway. He had more important things on his mind and the quicker he could escape the curious eyes, the better.

5 out of 5! Carol Lynne is an absolutely amazing author. Her words are beautiful and captivating. This is a five star masterpiece by a brilliant artist...Without a doubt a must read novella by a must...

Theron's Return is a return to the beloved Campus Cravings series that I have come to love so well. So many favorites make an appearance that I felt like I was living in BK house and hanging out...

Share what you thought about Theron's Return and earn reward points.