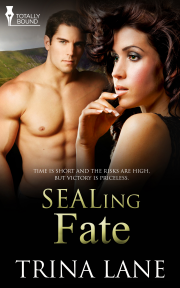 Time is short and the risks are high but victory is priceless.

Dr. Kat Martin, an anthropologist accustomed to the world of academics, has no idea that a chance encounter in a crowded club will change her life forever. Navy SEAL Lieutenant Commander Jace Hudson is determined to sweep the tempting doctor into his arms, but in no way does he expect the ache in his heart when his short leave ends. Despite their apparent opposite natures and the dangers of Jace’s work, the two decide the bond formed is worth exploring undeterred by the distance between them.

Jace must go back to Virginia and his operations to fight global terrorism, while Kat is committed to her students and research in Missouri. When their relationship is revealed it becomes apparent that not everyone is happy for the couple, and their hearts aren’t the only things in danger of being taken prisoner. Missions for Jace's team are going wrong in unexplainable ways, and Kat is trying to survive a stalker who catapults her quiet world into one filled with terror.

?Reader Advisory: This book contains a scene of non-consensual contact.

The scent of the flowers climbing the trellis behind her back wafted in the warm air, and occasionally a light breeze cooled and caressed Kat’s hot skin. There was nothing like a summer night in St. Louis. Oh sure, there were times when the humidity could make her feel like she was breathing soup, but tonight was actually quite pleasant. It was mid-September and an oppressive heat wave had sent temperatures skyrocketing above one hundred degrees for the last two weeks. When she woke up this morning, the air coming through her open bedroom window felt clean and fresh, not stale and stagnant as it had been. The change was being celebrated all over the city.

She listened to the music blaring from the speakers on the dance floor, a slow hypnotic rhythm calling to the soul. Her eyes were having trouble tracking people in the colored and strobe lights winking on and off, the effect causing people to catch only glimpses of their dance partners and making the atmosphere seductive and anonymous. The dancers tangling on the patio made Kat wonder how it would feel to move so freely, so seductively. Fantasies of a man holding her close and moving to the hypnotic music flitted through her mind. Too bad said man did not exist.

Looking up, she spied her best friend Amy with her fiancé and smiled. Seeing their happiness warmed a place in her heart, but it could not fulfill the longing to feel that closeness with another person. Kat didn’t see that happening for her very soon, if at all. Allowing someone that close left a person defenseless. Kat had known vulnerability and complacency from a very young age and refused to allow those weaknesses to control her again. She deemed the occasional twinge of loneliness an acceptable after effect for securing herself from susceptibility.

Kat saw a couple on the dance floor so wrapped up in each other that it looked as if they had created their own little world. They were an attractive couple. The solid-built man stood tall behind his dance partner, whose height complemented his. She leaned into the man’s chest with her head resting on his shoulder as he circled her stomach with his arms and leaned down to kiss her nape and shoulder where perspiration glistened. Although they were barely moving, the dance—a gentle sway back and forth and a grind of the hips—made it easy to envision them standing just like that and slowly making love.

Kat became lost in the fantasy for several minutes until a man’s deep, husky voice whispered into her ear, “Enjoying the show?”

She turned to examine the owner of the sexy voice. In the darkness all that was visible were a strong face and sensual lips. She coyly smiled at him. “I always enjoy a good performance.”

I wonder what they feel like? Are they soft, and does the touch linger or do they command surrender? Do they bring pleasure or spew venomous pain?

Returning her attention to the conversation, she heard him say, “Ahh, so you’re a voyeur?”

Kat considered her response before answering. She didn’t want to encourage some deranged stalker by answering with a suggestive remark.

“Isn’t everyone to a certain extent? How else do you explain the obsession with physical appearance or rubbernecking motorists trying to catch a glimpse of fatalities on the freeway?”

“I never thought about voyeurism in those contexts, but it certainly makes sense. It is the human response to innate curiosity. I’m Jace Hudson.” He offered his hand to shake, and when she hesitantly answered, his hand enclosed hers in a warm, strong grip.

“Kat Martin.” She felt rough calluses as their hands separated, giving a clue to his rugged nature. Whatever this man did, it was not behind a pampered desk. That realization only enhanced Kat’s interest.

Jace looked at the woman sitting in front of him. In the darkness, he could barely identify any distinguishing features but he felt drawn to her in a way he could not explain. Jace watched as the lights from the dance floor flashed across her face and caught the aloofness in her eyes. The detached demeanor was one he knew well, one he often saw in himself.

The nature of his work required a degree of separation from others. One could not serve in his capacity and maintain close relationships. He wondered what had caused the isolation in this beautiful woman’s eyes as she sat watching the exhibitionist couple. She managed to portray a heady combination of both loneliness and arousal.

The dim lighting made it difficult to tell the exact shade of her long, dark hair, which could have been anywhere from rich sable brown to inky black silk. Soft curves on her petite frame made him want to cup his hands around them. Jace had caught her scent as he walked up behind her—an enticing blend of vanilla and peaches, with a darker hint of womanly musk that instantly made his blood heat. Her voice hit him like warm Kentucky bourbon, soft and seductive.

Her face wasn’t what would be called classically beautiful, but very intriguing with deep-set eyes, a small nose with a little turn at the tip, and full lips designed to be kissed. When she’d turned around to look at him, a flash of the lights left him momentarily stunned by a glimpse of the most incredible green eyes he’d ever seen. They were somewhere between emerald and sea green, with brown flecks at the center, just like a cat’s.

That thought presented out loud. “Is your name because of your green eyes?”

Kat chuckled. “No, actually my name is Kathleen, but nobody except my mother called me that.”

Noticing that her reference to her mother was past tense, he wondered if that had something to do with the look in her eyes earlier. He watched as she closed her eyes and began to sway to the music thumping through the speakers surrounding the dance floor. Jace felt an overwhelming desire to see how she would feel moving in his arms.

Jace gave a puzzled look, considering their location and her apparently unconscious movements just moments ago. “You don’t like to dance?”

“Oh, I love to dance, but only in my socks, in the kitchen late at night.”

Kat looked straight into his smoky-gray eyes. “Let’s just say I don’t like being judged based upon my lack of dancing skills.”

“And who do you think would be judging you?”

Kat looked at him like he was a simpleton. “Everyone.”

“Well, I let my friends think they were dragging me out, but actually I love to come and listen to the music. I love letting the beat move through my body. There’s something about feeling the rhythms as they blast through the air that can never be matched with any personal listening device. It’s very stimulating.”

Jace wasn’t sure if she had meant that to sound seductive, but it definitely gave him stimulating images. “Okay, I have a solution for you. Come dance with me in the corner over there. We can feel the music together, but nobody will be able to see you.”

Kat nibbled on her lower lip and glanced around the crowded club for several seconds. She wrong her hands and shifted on her heels. Jace watched as resolve filled her eyes and she squared her shoulders.

Jace took Kat’s hand and led her to the dark corner of the tented patio. Out of the corner of his eye, he saw her give a little wave to some girl with a huge smile on her face and two thumbs sticking up as a sign of approval. Probably the friend who dragged Kat to the club.

Kat moved into his arms as a deeply rhythmic song began to make the air pulse. Heat radiated from her, and he didn’t think it was all owing to the warm summer temperatures trapped under the tent. Her soft chest pressed against his hard one. Jace instantly recognized the potency of her body.

She wore a short leather skirt, silk V neck sleeveless top, and the kind of heels that make a man think about a woman wearing nothing but the shoes. Her head came just above his shoulders. Putting his arms around her waist, he pulled her close. Kat’s hands held onto his hips, and he felt her grip tighten when he pressed one of his legs between hers.

The slow heavy beat, hypnotic melodies, and trancelike vocals worked perfectly for keeping her close to his body—his primary objective.

Jace and Kat made a steamy and likeable military couple who knew how to give each other a good challenge or two. If you like fast-paced action complete with bad guys who wants to harm them. So if you get...

Share what you thought about SEALing Fate and earn reward points.

Summer is a season that should be exploited for hours of fun in the sun. Long days. Endless blue skies. And for those of us who are children at heart the chance to revel in all kinds of activities that make us remember a more innocent time in our lives. Summer activities are different for everyone depending on how you grew-up, where you live, and what your interests are.