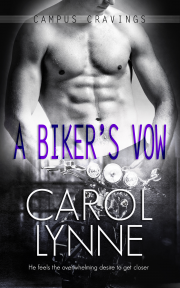 Book 9 in the Campus Cravings series

After contracting the HIV virus bad boy biker, Kade Straus, has given up on life and love. Taken in by his ex-lover, he tries to pull himself up by the boot-straps and continue on with his solitary existence but when he meets shy college student, Lark, he's completely thrown. Lark is nothing like his usual type, so why does he feel the overwhelming desire to get closer to the man?

Lark Wilsher grew up in an open environment. He knows people think he's a nerd, but titles mean nothing to him. He knows he's a sensualist hidden behind wire rimmed glasses and text books.

Determined to protect Lark, Kade hides his growing attraction. But he has a lot to learn about his disease and the man who's captured his attention. Lark is more than willing take on a six-foot-four biker and fight for his love.

As Kade lay in bed, he touched his lips. The kiss earlier in the day from Lark had stunned him. He’d been surprised to say the least.

After he’d helped Sam bring Lark back from a hypoglycaemic attack, Lark had pressed his lips to Kade’s. Whether Lark meant it as an intimate gesture or not, it was the closest Kade had come in years.

What would it feel like to hold Lark in his arms? He’d been attracted to the small, five-foot-three man since he’d first set eyes on him. Usually he was attracted to other Alphas like himself. Tattoos on another man made him hot, and he’d never fucked anyone who wasn’t proportional in size to his own six-four frame.

Lark was different, with his small wire-framed glasses perched on the end of his nose and his face always buried in a book. He was about the cutest thing Kade had ever laid eyes on. Just thinking about Lark’s tight little body had Kade’s cock hard. He plucked at the small silver hoops in his nipples.

Pushing the covers down, Kade wrapped his long fingers around his cock. He rarely indulged any more. Getting himself off had become old and lonely. Now though, just closing his eyes and thinking about the soft kiss Lark had given him was enough to fuel his lust.

Grabbing his balls with his other hand, he applied just enough pressure to receive that bite of pain he enjoyed. The more he thought of Lark, the faster he pumped, drawing his legs up to insert a finger into his puckered hole.

He could easily picture running his tongue across all that smooth hairless skin. Dipping his tongue into that cute little belly button before travelling north to what he was sure were a pair of pierced light brown pebbled nipples.

Closing his eyes, he fought to catch his breath. He hadn’t had an orgasm like that in four years, eight months, three weeks and two days. His mind drifted to the day in the doctor’s office when he was told he was HIV positive. In some ways, a part of him had died that day.

Trying to shake off the maudlin thoughts, he rose and found a dirty bath towel in his laundry bag and cleaned himself up. Tossing it back when he was dry, Kade stumbled back to bed.

As he tried to sleep his mind kept going back to Lark. What would it have been like if he’d never contracted the stupid virus? Would he still find Lark attractive? Unfortunately the answer, he concluded, was no. He wouldn’t have given Lark the time of day. Not because the smaller man wasn’t sexy, because god knew Lark was one sexy sonofabitch. Nope, he wouldn’t have given a staid bookish sort of person his attention.

The Kade of the past was a wild man who liked hot sweaty sex in public restrooms. He loved the smell of a man, the funkier the better. Back then, he drank hard and fucked even harder. Night after night, one or two partners, whatever and whoever he could get his hands on.

Kade shook his head. Yeah, fun times that he’d be paying for, for the rest of his life.

The alarm woke Kade the next morning. When he couldn’t find the off button, he yanked the cord out of the wall and threw the clock across the room. After realising what he’d done, he grinned. Perhaps that was a bit extreme.

Jace barged into the room, still naked. “What the hell was that?”

Kade pointed towards the clock that had come to rest in the corner. “Sorry.”

Eyebrows lifted, Jace shook his head and sat on the bed next to Kade. “Bad night?”

Falling back onto his pillow, Kade threw his arm over his face. “Yeah, something like that.”

He received a poke to the ribs from his best friend. “Get up. Sam’s making pancakes.” Jace stood and pulled the covers off Kade.

“Do you mind?” He asked and quickly covered his cock.

Jace chuckled. “Although I’ve seen every square inch of your body in detail, I can see you wanting to hide that horrible tattoo. ‘Free Rides’, seriously? If I were going to let someone that close to my cock, I’d at least have something a little more clever.”

“Shut up and go put some damn clothes on. Waving that thing around a celibate man is very dangerous.” Kade threw the covers back over his exposed lower half.

Laughing, Jace walked out of the room. “You could get some if you really wanted. Not mine of course, but I know a guy,” Jace threw over his shoulder as he went into the master bedroom.

Kade’s first thought after Jace left was of Lark. With a groan, he felt himself harden and rolled over. Burying his head under the pillow, he willed his cock to get itself under control. Why couldn’t he get that little pixy out of his head?

He knew he could fantasise and dream about Lark all day, but that was as far as it could go. Not only was Lark too innocent for someone like him, but spreading the virus stopped any thoughts of a physical relationship in its tracks.

Kade felt himself slipping back into the depression he’d fought so hard against the past several weeks. Turning back over, he swung his legs over the side of the bed and looked down at his now flaccid cock.

Standing, he made sure the hallway was clear before making his way to the bathroom. Kade made a mental list of things he had to do that day. It was the only way he could keep himself out of the rut of depression.

As he started the shower, he began to count things down. Breakfast, go to work, finish up the installation of the marketing department’s new computers, eat lunch with Sam and Jace, think of Lark. Kade stopped with the shampoo bottle in his hand. No, he would not think of Lark today, or the fact there was no future for them.

After rinsing his hair, he turned off the shower and dried off. Wrapping the towel around his waist, Kade quickly made his way back to his bedroom and dressed in his usual uniform of faded jeans and a black sleeveless T. He was damn lucky Tony didn’t care what he wore. His nicest pair of jeans still had a hole in them, and he didn’t think Tony would care for his collection of tight leather pants.

Grade A! Outsanding Read. Carol Lynne's A Biker's Vow is an extremely moving story. As always Ms. Lynne's characters are strong and tender, stubborn and loving and most of all drag...

Share what you thought about A Biker's Vow and earn reward points.