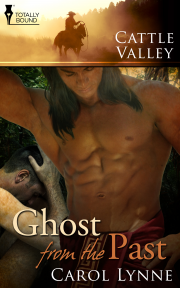 Ghost from the Past

Book 22 in the Cattle Valley series

Happily settled in Cattle Valley with the men he loved, Rio Adega wasn't expecting the one call that could bring his world crashing down around him. "Rio, it's Chet. You'd better brace yourself, old friend. Ghost has been recovered, alive. He's asking for you."

In less than a minute, Rio's loyalties are tested. Ghost. The one man Rio owed his entire life to was alive. Not only had he unknowingly left the African jungle thinking his mentor and lover was dead, but he'd managed to move on.

How can Rio make amends to the man who gave him everything, while still holding onto the relationships he's worked so hard to build?

Ghost from the Past

Ryan doubted he’d ever seen so much joy in one man’s face as at the moment Sean stepped through the door and everyone shouted, “Happy Birthday.” It had served as a good reminder of just how much the little things one partner did for another really meant.

He glanced across the room to where Rio was talking with Sean and Moby. Rio’s posture clued Ryan in on how comfortable Rio was with the two men. How long had it been since he’d seen Rio so at ease? Like Rio had reminded him earlier, it wasn’t always about sex. It had been a big slap-upside-the-head moment for Ryan.

Working his way through the crowd of friends, Ryan found Nate. “Can I steal him for a moment?” he asked Jay.

“Sure. I need to go to the kitchen for more food anyway.” Jay disappeared, leaving Ryan alone to talk to Nate.

“What’re we gonna do about Rio?”

“What do you mean?” Nate asked, comfortably slipping a hand into Ryan’s back pocket.

“Don’t play dumb. We both know he was right earlier. We both get so damn busy with our jobs we don’t spend as much time at home anymore.”

Nate bit his bottom lip and looked towards Rio. “You think he’s really pissed this time?”

“Does it matter? The fact is he’s right. We’re just so used to him blowing off steam and then forgiving us the next day that we never take the time to actually listen to what he’s saying.” Ryan tapped Nate’s nose. “Don’t deny it. We do that and you know it.”

“So, what? Am I supposed to ignore the people that depend on me to run this town just because my partner’s feeling unappreciated?”

Staring down at Nate, Ryan gave an inward groan. Why hadn’t he seen it? The answer jumped up and smacked him in the face. They were both guilty of putting everything and everyone else ahead of each other. It had slowly become the routine after the collapse. At first it had been the process of rebuilding, and then the healing had finally begun.

His thoughts were still rambling when he noticed Rio reaching for his phone. Dark eyebrows drew together as Rio said something to Moby and Sean before walking out of the room, the phone held to his ear.

Ryan guessed it had to be one of Rio’s friends calling to wish him a merry Christmas. Nate gave Ryan a hug and gestured towards the kitchen. “I’ll go see if Jay needs any help.”

“Erico’s in there. You sure it’s safe?” Ryan said around a chuckle.

Nate’s eyes lit up. “Ooh, I hope not.” The words were barely out of his mouth before he took off.

Ryan shook his head. “Pervert,” he mumbled, while at the same time wondering if he could also be of some help in the kitchen. Normally he’d ask Rio to join him in surprising their voyeuristic partner, but with their current predicament, Ryan figured it would be better to find Nate on his own.

As luck would have it, he found Nate actually helping in the kitchen. “Wait. I need a picture of this.”

Ryan laughed and winked at Jay. “You’ll have to share your secret with me. I haven’t seen Nate in a kitchen actually working for quite a while.”

The door swung open and Sean dashed in. “I think the two of you need to check on Rio.”

The worry in Sean’s expression scared the shit out of Ryan. “What’s happened?”

Sean shook his head. “Not sure. He got a phone call and disappeared. I just saw him sitting at the bar in some kind of locked stare or something. I tried to talk to him but he didn’t even acknowledge me.”

“Fuck!” Ryan spat, taking a shortcut through another door to the bar, with Nate right on his heels.

Rio’s naturally bronzed skin had gone as white as a sheet.

“What’s happened?” Ryan asked, sliding onto the barstool next to Rio.

Chet? How did Chet get Rio’s number? He works for the CIA, dipshit. “What did he want?”

When Rio didn’t answer right away, Ryan’s stomach began to cramp. He knew no good could’ve come from the conversation between Chet and Rio. Chet had been with them in Africa almost ten years earlier, and to his knowledge hadn’t contacted either him or Rio since their failed mission.

Ryan put a hand on Rio’s back, trying to comfort his partner. “What did Chet want?” he asked again.

“To tell me Ghost is alive and wants to see me.”

This story has an intense plot that takes off from the very start. I love the Cattle Valley series, but I have to say that this story is my favorite of all.

Ive read 2-4 books of this series, it was good to read about the original characters and catch up on their relationship. This story was done well. You wont be disappointed.

Share what you thought about Ghost from the Past and earn reward points.