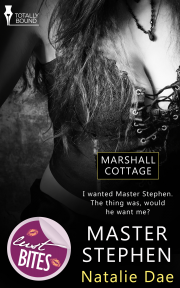 Book 4 in the Marshall Cottage series

I wanted Master Stephen. The thing was, would he want me?

I’d been visiting Marshall Cottage for a while, watching a certain Dom who never seemed to have a sub of his own. He borrowed other people’s, giving them a slap here, a nipple tweak there, seemingly confident and comfortable with himself. But I was shocked to find he wasn’t any of those things—until he took control as a Master.

I wanted him as mine. Would he agree to dominate me? Give me the pain I desired? I aimed to make that happen and couldn’t wait to see how things played out. I’d observed him for long enough. It was time to step up and take what I wanted—and every beautiful bite of pain he was willing to dish out.

Would he also give me the love I craved? A permanent relationship where we shared everything? A girl could hope, couldn’t she?

He was subless—again. And I was Masterless.

I could have been offended that he hadn’t appeared to have seen me over the past few weeks, but I wasn’t. Maybe I wasn’t his cup of tea. Maybe he wanted to go around sampling every other sub he could get his hands and mouth on for a while. Maybe I was just hoping a little too much that he’d notice me.

I’d had my eye on him for a while, and if I hadn’t been coming here for so long, I doubted Mr M would have let me through the front door, knowing I had no Master to meet once I got inside. The same must have gone for Master Stephen—and I knew that was the case because he’d been coming here for as long as I had. Longer, I suspected.

He was sucking a sub’s nipple, her bound to one of the crosses, spectators standing around enjoying the show. I wondered if everyone thought of him as just a tart—and whether he cared if they did. Or maybe he just wasn’t a particularly nice person, hence him having no permanent sub. He might be married ‘out there’ and only came here to indulge in something he couldn’t get at home. So many potential reasons for his behavior, but ultimately, what he did was his business, really. Nothing to do with anyone else so long as he played by the rules.

And as far as I could see, he always did.

The sub on the cross tried to writhe, but she’d been bound so tight she could barely move. Not only was she tied at the wrists and ankles, but her Master had roped her middle. I counted fifteen rotations of rope, and they went from just above her pubes to sit below her breasts. I felt like the hemp chafed me, and I experienced the delicious sensation of not being able to move. For a second or two I envied her. I hadn’t had rope play before, but imagination was a powerful thing.

I sighed. One day my Master would come. One day I’d meet the man I was supposed to be with. But something inside drew me to Master Stephen. Perhaps he was the one for me. Or had I just convinced myself that he was the perfect partner because no other had arrived in my life and had wanted to stay? Quite possibly and—as hope had a tendency to do—it had sent me off thinking that fate had planned for us to be together.

I shook off my fanciful musings. After all, it sounded like a load of rubbish even to me. Inside I was a girl longing to be noticed, to have a Master who would take my life in the direction it needed to go. Take me where I needed to go. A friend of mine had said that if you went looking for The One you’d never find him, but my answer had been that if you didn’t look, if you didn’t put yourself in the places where a Master would notice you, how the hell were you supposed to meet anyone?

Share what you thought about Master Stephen and earn reward points.

Natalie Dae - Blog Tour stop with Erotica for All

What if I didn't write?

Sometimes, I sit and wonder what my life would be like if I didn’t write. Of course, there was a time when I didn’t, so I kind of know. Between leaving school (where I did most of my writing) and having four children, going to work part time, I didn’t have the energy or enthusiasm to pick it back up again. I still kept a daily diary, though, but then one day, when my fourth child was two weeks old, something nudged me to write again. I think it was after a book I’d read had inspired me and it reignited the spark. My sister gave me a typewriter—I’m sure it was her, and thank God she did!—and I managed to scrabble enough money together to buy some paper. Times were hard back then, so buying that paper meant I gave up a couple of my meals.

Where did the idea for The Marshall Cottage Series come from?

Other books in the Marshall Cottage seriesView Series Page