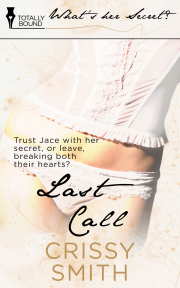 Haunted and on the run, Piper must decide—trust Jace with her secret, or leave, breaking both their hearts?

Ex-Marine Jace Anderson has followed orders his entire life. Now free of the bonds that held him, he has started over in a new town with his own bar. He’s even found the woman he plans to settle down with. If he can keep her from running, that is.

Piper Maxwell never stays in one place for long. She’s learned to stay two steps ahead of the past that haunts her. Moving on has never been a problem until she meets Jace. Jace calls to a part of her that she long ago buried. And she knows if he finds out what she’s hiding he will run as far and fast as possible.

Jace must convince Piper he will remain by her side always. That vow is tested when Piper’s past finally catches up with her.

Will Jace and Piper be able to find their happily ever after or will the start of their relationship also be the end?

Publisher's Note: This book can be read as a standalone but is best enjoyed as a prequel to Designated Alpha.

Jace Anderson heard the familiar words from his place at the cash register behind the bar and his blood started to pump in anticipation. His body was alive with awareness of what was to come. He turned his head to the woman who’d made the announcement. His bar manager Piper Maxwell nodded to the two bartenders while smiling at his patrons. This was the best part of the evening for him. Jace and Piper, alone, the opportunity he craved night after night.

He took the rag out of his back pocket and stepped around the bar into the seating section. He started to wipe down the empty tables to help clean up for the night. The dark wood table tops gleamed in the bar light. Smooth, quiet jazz flowed through air and comforted those within. The stained but clean oak floors had been battered but continued to hold strong.

From any seat in the house, the windowed front offered the patrons a spectacular view of the beach yards away.

Jace had opened the bar only a year ago but it was now home. Everything he had ever wanted in his life wrapped into one place. The people who worked for him were his family. The woman currently ringing up the last of the patrons’ tabs… He shook his head. Piper was one of a kind.

The closing procedures only took half an hour. He had a very efficient staff—they were well trained and all took care and helped one another. The kitchen had been shut down two hours ago so the small staff in the back had already cleaned up their stations and gone for the night. The four remaining employees, his two bartenders and two waitresses, finished up and happily waved good night.

It had been a busy shift. Steady business. He couldn’t ask for much more. Even in a struggling economy he still managed to make money.

Lifting the last stool onto the table top, he glanced out the front window and saw the moon shining bright over the water. The astounding sight always made his breath catch.

He’d moved to Blue Cove, California after his last tour of duty. Almost fourteen months ago. He’d read about the small coastal town when he had been overseas and always promised himself he would visit. Once he’d set foot on the soft sand and watched the crystal-clear waves roll, he’d known he was home.

He’d gotten a business loan and opened Anderson’s Lounge. Anderson’s was the only bar located directly on the beach that he loved so much. He was able to serve the locals like himself as well as the few tourists who came to town.

“That’s it,” Piper told him, switching off the back lights.

Jace tore his attention from outside to glance over at Piper pulling a bottle from behind the bar. The light of the bar was the only illumination and the sight of the beautiful woman made his breath catch. It had become their nightly ritual to share a toast to another night accomplished.

Jace always looked forward to this time. To this drink. One cocktail shared where Piper was relaxed and things tipped more personal. Or as close to personal as Piper ever allowed.

Share what you thought about Last Call and earn reward points.