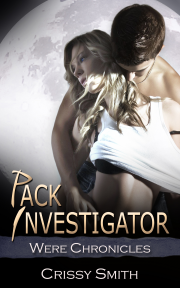 Book 14 in the Were Chronicles series

It’s not only the houses burning in Clear Creek. Lily Harper is setting Garrett Sullivan’s heart on fire.

Garrett Sullivan, a firefighter for the city of Clear Creek, has his hands full when he rescues a young boy from a burning house. The kid, Nick, is a shifter and in need of help, so Garrett takes it upon himself to make sure the boy is safe. From the first look at the boy’s social worker, Garrett knows his life will never be the same again. Her enticing eyes and bright mind call to everything inside him.

With Garrett a key member of the investigation team looking into a spate of fires in the neighborhood, he’s put right into the action. When the boy’s father is kidnapped, the intensity escalates.

Lily Harper loves her job as a social worker in Clear Creek. When she’s assigned the case of Nick, his big, wounded eyes tug at her heart. The strong firefighter who stands by his side tugs at something else. Garrett is everything she has been searching for in a partner. But with a difficult investigation involving kidnapping, arson and mystery, Lily worries that she’ll lose Garrett before he can actually be hers.

It will take the entire city, their friends and family to solve the latest threat to the shifters and their human lovers.

The rumble of the fire-truck engine that surrounded Garrett Sullivan was so familiar to him that in his exhausted yet hyper state Garrett felt at peace. There had been no injuries from the fire that the crew was returning from. He’d never worked with such a flawless team.

They pulled into the bay of the central fire station in Clear Creek and he grinned. He wanted a nice hot shower and it wasn’t his turn to clean up the gear or to replace supplies in the trucks. He could head straight to the locker room.

After he jumped down from the truck, he strolled through the open garage, taking in the differences between his current station and his old one. Garrett was glad he’d made the move three months ago. Even better, his two best friends, Tom and Steve, had transferred with him, although their reasons had been quite different from his.

He nodded as he passed a couple of the guys before he pushed open the swinging door and entered the locker room. Even the rundown facilities there didn’t bother him. Garrett had wanted a fresh start, to leave the city of his birth for the first time, forge ahead in his career and hopefully find love.

Garrett pulled his sweat-soaked T-shirt over his head and dropped it onto the old tiled floor. He glanced up as Tom walked in. Garrett lifted his chin to his best friend. Tom looked better than he had in months. Tom and Steve had wanted to connect with the local wolf shifter Pack and Garrett had been able to help them achieve that goal. In Kermit they’d been lone wolves as there hadn’t been enough shifters to form an effective Pack there. They’d tried but with no Alpha or Beta, all the shifters had fought for dominance. Garrett was human, but luckily he had an in with one of the local shifters in Clear Creek. His sister’s shifter boyfriend, Cooper, had been happy to help get Tom and Steve connected with the local Pack.

“I’ve never seen a fire spread so quickly,” Tom stated as he walked in.

“I heard the captain talking to the fire investigator. Lieutenant Haas told the cap that this was the third suspicious fire like this in the city in the past two weeks. The other fires were in the northern part of the city. He’s certain they have an arsonist,” Garrett said.

As soon as he’d seen the investigator and his captain with their heads close together, Garrett had known something was up. He’d crept closer even though he’d known he shouldn’t have been eavesdropping. It wasn’t like his captain wouldn’t tell him the truth if Garrett asked. He just wanted to hear it from the investigator’s mouth.

If he’d remained in Kermit, he’d probably have his certification to move into the investigating part of fighting fires. He knew that he’d made enemies by associating with the shifters and he was sure no opening would have been offered to him had he stayed. So instead of finishing he’d transferred as a firefighter. But even in Kermit, he’d heard how Lieutenant Haas was the best investigator in the state. Garrett hadn’t officially met the man but he’d kept an eye out for him.

When he’d spotted him speaking with the captain, Garrett hadn’t been able to resist. He might not have been part of the community for long but he was already invested in every soul that lived in Clear Creek. “They haven’t found a connection yet but they are sure it’s the work of the same person,” Garrett finished telling Tom.

“That’s weird,” Tom replied. “But I’ve heard good things about Lieutenant Haas and his team. I’m sure if anyone can find the person responsible it is them. I’ll be glad not to have to fight a fire like that again, though.”

“Julie promised it was never boring here in Clear Creek,” Garrett said. He unsnapped the watch from his wrist and set it inside his locker.

Tom started to undress so Garrett went back to preparing for his own shower. He still had another five hours left of his shift and he hoped there wasn’t another call. His portion of the city ran from the creek to the outskirts to the center of town. Mostly they handled small fires due to residents burning trash, out-of-control kitchen flames or traffic situations where they needed to get people out of their smashed vehicles with heavy equipment. Tonight had been the first fully engulfed home he’d fought as part of Clear Creek Fire Department.

Adrenaline still coursed through his body and he needed to work some of it out before he could get to sleep. He could have gone straight to the gym like some of the other guys but he didn’t want to be around everyone. He wasn’t going to get laid while on shift so he needed to figure out how to relax. First he was going to start with a hot shower, then settle on the couch with the latest thriller he’d picked up at the local bookstore. Once he finished his shift tonight he had the next two days off and planned to find someone to spend the time with him in his bed. He just needed to make it a few more hours. He dropped his pants then picked up his fallen garments. He dumped the rest of his stuff in his locker before he picked up his shower bag. He passed by the entrance to the showers, snatching a towel off the shelf as he strolled to the last cubicle.

The Clear Creek station showers were made up of single stalls so at least he had some privacy. He hung his towel on the hook outside the curtain and his bag on the inside before he yanked the curtain closed. He turned on the hot water knob, knowing that the water would start out warm and heat from there. He’d learned early on that there was no cold water available. Some mix-up with plumbing, but he’d rather have hot than cold anyway.

I enjoyed this. Garrett is human who moved to be with his sister and start again in his life. He saves a boy from a fire as he's a firefighter. From there he meets Lily. Lily is a Wolf shifter and i...

Share what you thought about Pack Investigator and earn reward points.