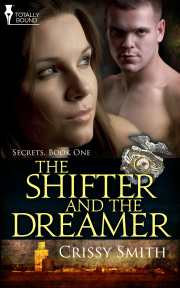 The Shifter and the Dreamer

Book 1 in the Secrets series

Sheriff Katy Rose has been running from her unique gift for most of her life- but one man won't let her run from him.

When Katy left the F.B.I. and returned to her small hometown as Sheriff she thought she left her work partner/ lover and his questions behind. But a serial killer has made a stop in her little town and the lead detective in the case is the only man she ever really loved.

Federal Agent Cameron Morris let Katy go once. He'd known she wasn't ready to be introduced to his kind, especially as she was hiding things from him. He always planned to find her again when the time was right.

The thought of Katy in danger brings back all of his protective instincts and reminds him that Katy was meant to be his.

If the two of them can trust one another to reveal their deepest darkest secrets they just might be able to stop an evil man from killing again. If not, they might not see the next full moon.

There was nothing mysterious or intriguing about murder, especially when the victim was a beautiful young woman who’d had her entire life in front of her. Sheriff Katy Rose stood from her crouch beside the body of such a woman and closed her eyes. After a few minutes, she reopened them and took in the scene.

The woman was lying face down, her hands secured behind her back, her ankles bound with zip ties. She was completely nude. Her long, blonde hair was matted with blood and dirt, as was her torn, beaten body. However, the most upsetting part was that she was missing her right pinkie up to her knuckle.

“Hey, Davis,” she called back to one of her deputies. “This scene look familiar to you?”

Scratching his greying beard, he nodded. “Sure does, Sheriff.”

“Christ, Davis! Do you know what this could mean?”

“Could be a copycat,” she offered. “Dallas is a long way from here.”

“Could be,” he agreed, without emotion.

With her latex-covered hand, she pushed her bangs from her eyes. “Probably not.”

“Probably not.” It was too close to all the murders east of them. The serial killer that was haunting one of the biggest cities in Texas should have been too far away to reach her small town.

Five women had been found in the last year. The media coverage on the murders was huge. As much as she had tried to ignore the reports, she had been intrigued and had been pulled in. Of course pieces of the case had slipped through to the outside. It could be a copycat. But something inside her screamed that life in the small town was about to change.

The victim’s name was Amanda Caldwell. Katy and her partner watched as the medical examiner loaded up her body. She had been twenty-eight, a teacher at the local elementary school, young, single, and the perfect target.

Katy surveyed her surroundings. The woods were thick and dense. No one would have seen him dump her body way out here. It was private property, but nearly everything out here was. This far west, most areas were owned by oilmen or ranchers. Each took the possession of his land seriously but had too much to be able to monitor every inch.

“Who owns this land?” she asked without turning around.

“This is Lambert Land,” Davis informed her.

“Lambert?” Katy asked, facing him. She should have known that, but it had been over a dozen years since she’d been there.

Davis nodded while taking out a packet of cigarettes.

“Great,” she mumbled to herself. Lambert Oil was old money out here. A very formidable family that played by their own rules and had little use for anyone else. She’d had run-ins with the sons numerous times. The five Lambert boys found trouble like they found oil—plentiful.

“Well, let’s head up and see what they saw,” she told Davis, and headed for her SUV. “Who found the body?”

Davis pulled out his notebook and flipped a page. “That’d be Clint Lambert. Said he was taking a drive after dinner. At first he thought it was a mannequin or something, stopped and took a look, threw up couple yards over there.”

Katy chuckled, thinking of Clint Lambert being sick. She knew it was wrong but, with their past, it gave her a small amount of satisfaction that the big, cool man had lost his lunch. Her amusement quickly left when she thought about the body. It had been one of the worst she’d seen in her career.

...the opening pages started this story off with an intensity I wasn't expecting for a mystery of its short length...I'm curious as to where Ms. Smith is going with the next release.

The love scenes were sexy...If you're looking for something hot and fun to read...this is one I recommend to you.

Share what you thought about The Shifter and the Dreamer and earn reward points.