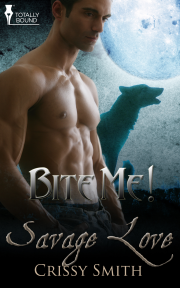 Kelly Walker will do anything to catch her sister's killer, including entering a world she'd had no idea existed, and giving her heart to a man not completely human.

Kelly Walker is determined to bring down the man who killed her sister. One year later and there still hasn't been an arrest made. She knows there is an on-going investigation headed by the attractive and intriguing Alex Gray. The only man who has ever been able to touch something deep inside her she'd rather not know about. Their attraction is almost animalistic.

Alex Gray has tried for a year to keep Kelly out of the investigation he's given two years of his life for. But when he finds her trapped with the man he knows has killed before, he must risk everything to protect her. Showing her what he really is and what they are up against could cost him the one thing he's waited his entire life for—a mate.

Kelly wasn’t happy, but she left the bar. What was she going to do anyway? Walk up to Craig and introduce to herself as the sister of the woman he’d killed a year ago. He would probably pull out a gun and shoot her where she stood.

Shaking her head, Kelly walked to her car. A sound from behind her made her stop and twirl around. No one was there, but the hair on the back of her neck stand up. Digging through her purse, she found her keys and gripped them tightly in her hand. She looked back at the door. She could go back inside and have Alex walk her to her car.

No, he might think she was making it up to be alone with him. Biting her lip, she turned back towards the car and jumped in surprise. The man in front of her was over six feet tall, had on a long blank trench coat, and was snarling at her. As he reached out for her, Kelly backed away. He moved faster and grabbed her upper arm.

He quickly pulled her in the alley behind the bar. She could see three men waiting.

Kelly started to kick, but a hand covered her mouth and an arm went around her neck, cutting off her air. Then she was standing in front of the man she had come to see.

Kelly tried to kick out again, but the man holding her was just too strong.

“I love the smell of fear,” Lambert said in a deep voice that made her stomach roll.

He straightened, and she could make out his facial features in the dim light of the alley. Just like the first time she’d seen a picture of him, she was amazed at how normal he looked. In fact, up close, he was quite attractive. No wonder why her sister had been interested in him.

Kelly shook her head, unable to talk with a hand over her mouth.

“No? You do have something familiar about you though.” He ran thin, bony fingers over her cheek, and Kelly felt tears threaten to fall. When his thumb flicked over the pulse in her neck, she could have sworn his eyes turned red.

Eyes wide, Kelly watched him as he leaned forward. His mouth opened and his teeth, which had been normal, started to lengthen. Her scream was barely audible as terror she’d never felt before shook her body.

Before he reached her, there was a howl and something knocked into them. Kelly went down on her side and rolled away from the two men. She heard someone call out, “wolf,” as she scrambled to hide against the wall of the building.

The scene before her was like something in a movie. A grey-and-white wolf stood in the mouth of the alley as the four men spread out with guns drawn. Kelly didn’t know what to do, so she pulled her legs to her chest and wrapped her arms around them, hoping to stay invisible.

The first shot rang out and Kelly jumped. The wolf charged into the alley, attacking the wrist of the one who’d shot at him. While he was busy, another man aimed for the wolf, but the animal moved just in time and sidestepped another bullet.

The first man was holding his arm as he fell away from the wolf. Kelly watched as blood gushed from the wound and dripped to the dirty concrete. She felt her stomach turn at the sight and steeled herself not to get sick. That wouldn’t help the situation at all.

Then the wolf jumped on the other guy, his sharp canine teeth clamping down on the man’s throat. Kelly closed her eyes as the man’s scream turned into a gurgle but the sound of movement had her opening her eyes again. She watched as the wolf released the man and stalked towards the other two men. The one who had held her, and the one who had killed her sister.

The men exchanged looks before jumping straight up in the air. The wolf charged at the same time but met only air as the two men disappeared.

Kelly wasn’t aware she was sobbing until the wolf turned, and she met his stare. She’d never seen a real wolf before, only on television, but she knew this wasn’t just an ordinary wolf.

He stepped forward, and Kelly held out a hand. “St...st...ayyyy,” she stuttered. Her hand shook and she could practically hear her own heart beat. The wolf stepped closer.

Hoping this was just a bad dream, she closed her eyes, counted to ten, then opened them, but the wolf was still there. Standing in front of her, his head tilted to one side, blood dripping from his mouth.

Kelly moved onto her knees and tried to crawl away. The wolf growled, and she froze in her spot. The growl vibrated the air around her. Obviously, the wolf didn’t want her to move. So she remained on her hands and knees against the old brick building, watching as he closed the distance between them. When he stepped in front of her, she once again got a look at the eyes.

A sense of calmness went over her as she looked in those deep grey eyes. She just stared, as she had done not more than half an hour ago. “Alex,” she whispered.

The wolf moved and she felt his soft fur against her skin.

The back door of the club swung open, and they both jumped. Before she could blink, the wolf hunched down and growled. Kelly felt a wave of relief as Marcus stepped out the door.

Kelly watched Alex’s partner take in the scene before him. The wolf was still crouched down and growling, and Kelly was still on her knees. She looked over to where the men had been but they were gone. There were no bodies or anyone but them in the alley. No blood or sign of what had taken place. If Kelly hadn’t seen everything with her own eyes, she wouldn’t have known anything had even taken place.

Marcus closed the door and turned towards her. Kelly started to stand, but the wolf turned his head and snapped at her.

Share what you thought about Savage Love and earn reward points.