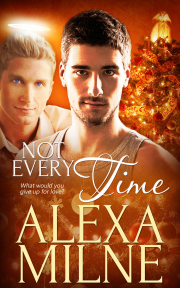 What would you give up for love?

Raziel Slade and Jack Hastings have been best friends since Raz saved Jack’s life twelve years ago. Jack has spent years searching for the perfect woman with the help of his wingman, Raz, the man he thinks of as his guardian angel. At a company Christmas party, the world Jack thought he knew turns on its axis, and feelings he didn’t know he had punch him right between the eyes. Can Jack learn to see his friend in an entirely different way?

Openly gay, Raz loves his best friend and has given up more than Jack will ever know to be with him, but he’s never dared to tell Jack how he truly feels, or to reveal his true identity. For twelve years, he has waited in the wings.

Now, with Jack’s sudden epiphany, can these two best friends work out if they have a future together?

Angelo Raziel Slade glared at the bathroom door behind which stood his best friend, Jack Hastings. He shrugged on his jacket and sat on the bed. “For heaven’s sake, Jack, stop complaining. This is your work’s Christmas party, and we’re only here because I’m tired of you whining about your pathetic love life.”

“I realize that, but you know how much I hate these occasions. Last year— No, I don’t want to remember that debacle. I want it made clear that I’m only here because you insisted and said you’d come with me. You know what I’m like.”

Raz sighed. He certainly did.

“I’m hopeless with small talk. Women come up to me and I panic. How come you can speak to women? Is it something to do with being gay? Do you lot have a special understanding of how women think, or what?”

Jack emerged from the bathroom, opened his arms wide and twirled. “So, will I do?” he asked.

Raz swallowed a gasp and crossed his legs. Oh, my God. You will do, but you could wear a sack and you’d do for me. “You clean up well. I told you a suit would be better. Women prefer men in a suit, but with more than a hint of stubble and the suggestion there might be something worth investigating underneath.”

“Is that the sort of men you like?” Jack asked.

Raz stood and closed the distance between them. “This tie needs adjusting, though. Here, let me do it.” Up close, the smell of his friend’s aftershave filled his senses. Why did he torture himself in this way? So I can be near him. Because I can’t bear the idea of not being near him.

“There, that’s better. A tie needs a Windsor knot. My father used to say you should always make an effort to be at your best.”

“You must miss them at this time of year,” Jack said, placing a hand on Raz’s arm.

Raz stared over Jack’s shoulder through the window into the dark December night. “My father was always too busy saving the planet to have much time for me, and I don’t remember my mother.”

“Just as well that my family love the bones of you then. You are still coming to ours for Christmas Day, aren’t you? Mum and Dad would skin me alive if you didn’t, not to mention Lisa. They think the sun shines out of your backside.”

“Yes, I’ll be there as usual. I thought Lisa was bringing Bradley this time, now that they’re official.”

“She is. He’s a brave man taking on my sister. Right, let’s get this over with. I’m glad we booked the room so we can both have a drink.” Raz pulled a face.

“It’s all right. I’m not going to have too much because women don’t like a drunk. And I know to ask questions, but not suck up too much if I see anyone I fancy. The place will be packed, so perhaps this will be the night.” He nudged Raz. “All those bankers together in one room.”

“That’s one word for them,” Raz whispered to himself.

Jack put his hands on his hips and struck what Raz called his Henry VIII pose. “Look, you insisted I come tonight and stop sitting at home complaining no one loves me and that my wrist aches.”

“Well, you won’t find Ms. Right if you stay home with me every Saturday night, now will you?” Even if I love every minute of it and hate the thought you might not be there.

Originally from South Wales, Alexa has lived for over thirty years in the North West of England. Now retired, after a long career in teaching, she devotes her time to her obsessions.

When the story reached its crescendo and the main characters declared their love for each other it felt like the timing was perfect. Their love story is so sweet.

I would recommend this st...

There is a quality to this story that I couldn’t help loving. It has everything I look for in a novella. It’s impossible not to adore Raz and Jack. And the story kicks off running, getting s...

Share what you thought about Not Every Time and earn reward points.

Let's start with you telling us a little bit about yourself, Alexa.
I live in Lancashire in the north of England, though I’m originally from Wales. I’m over fifty. I was a teacher for thirty years, teaching a variety of humanities subjects. I love reading, cats, the sea, mountains, and genealogy.

What would people be most surprised to learn about you?